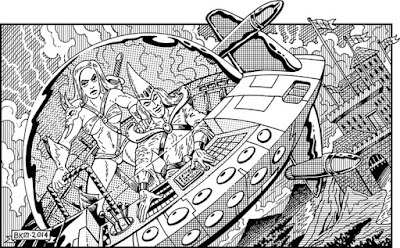 I've been in love with 'The Secret Machines Of The Star Spawn for a while now;simply put this is a great gonzo sci fi fantasy module originally for OSRIC but easily adapted into any old school edition or retroclone system with some modification.
The set up for this adventure goes something like this :
Locals have been hearing whispers of strange happenings around the Ancient Volcano. Rumors over the last few months of an unspeakable evil that has risen up inside. An evil that “fell from the stars.” They say there is something wicked and devilish going on inside. Highwaymen report of strange creatures, mechanical monsters, and "Little Green Men" that are roaming the land causing chaos and mayhem!  Now before I start waxing lyrical but Secret Machines, this is an adult oriented module with uses several of the adult conventions of science fantasy. Alien abduction, alien cross species breeding, adult situations,etc. 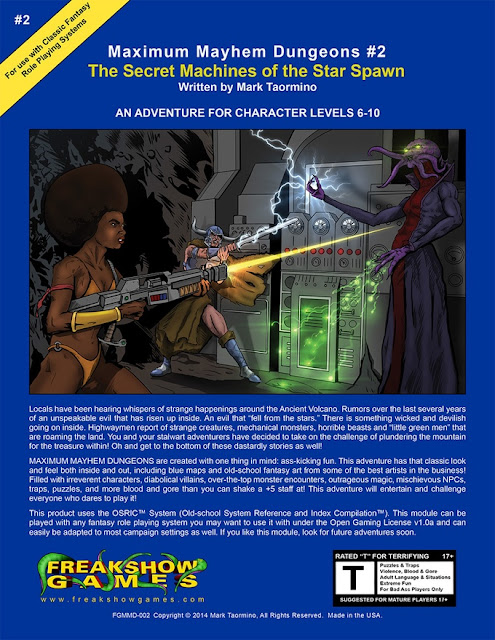 So Mayhem Dungeon #2: Secret Machines of the Star Spawn By Mark Taormino was part of a successful Kickstarter that got many of the best elements of the adventure unlocked, some really nice gonzo sci fi artwork, and some really nice maps put into the module.
If you missed this Kickstarter you can still find out more info on how to order this product and others from their website at www.maximummayhemdungeons.com
This brings me to center of my dilemma? So for the past two weeks, after the other half got me a copy of Dungeon Crawl Classics I've been going slowly over the game after a baptism by fire campaign with the Islands in The Stream run through of the DCC system. But this really has me thinking about Maximum Mayhem Dungeon #2 Secret Machines Of The Star Spawn.
It seems to me the more that I read of DCC, the more the gonzo and epic seem to collide in  within its pages add in some of the great material from Crawljammer and Crawling Under A Broken Moon  It seems to me that Mayhem Dungeon #2: Secret Machines of the Star Spawn By Mark Taormino is tailor made for taking your party of adventurers to the stars. Many of the themes and ideas explored in the module touch many of the aspects that I've seen in the various DCC zines. Though this module was meant for solid old school play  I can see it be easily adapted to a wide variety of OSR venues. 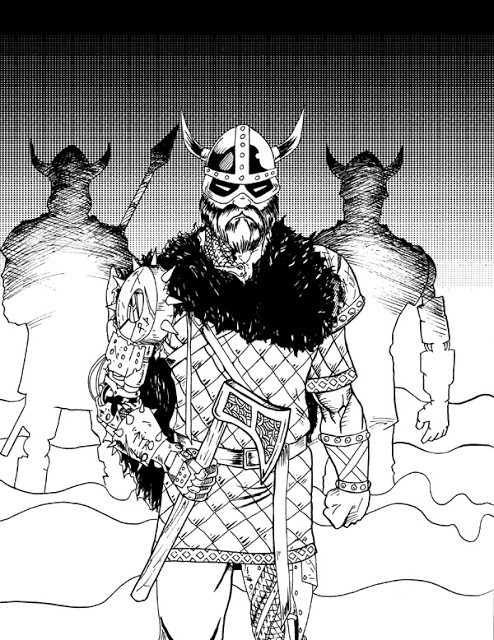 What Maximum Mayhem Dungeon #2: Secret Machines of the Star Spawn does and does very well is to take the conventions of D&D and use those to turn the game right over into the alien  gonzo zone but that's not a bad thing. This is also dependent upon two things, one if the PC's survive and two if they can deal with some of the deadly natures of the encounters in Maximum Mayhem Dungeon #2: Secret Machines of the Star Spawn. There is balance to them but Mark imparts a real sense of fun about the module. But for DCC there's more then simply a tie in as well. The space craft of the Star Spawn & his cohorts in orbit above your campaign world for several thousand years could in point of fact be your PC's funnel as their village or settlement is attacked by the Star Spawns minions. This give both a reason for the party to be together and the sense of burning anger in your PC's hearts. 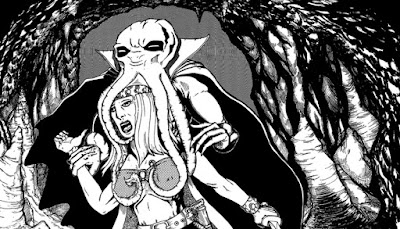 This is right from the Kickstarter, "Futuristic Spaceship which the Star Spawn has had "parked" above the planet unknown to anyone for the last 1000 years!"
This allows a DM to give your party a solid reason for being together on a local level while having the perfect excuse for introducing interstellar elements into a campaign world. Expanding upon those elements or making this a one shot adventure; are really going to be up to the Dungeon Master and their own approach to the material in Secret Machines. 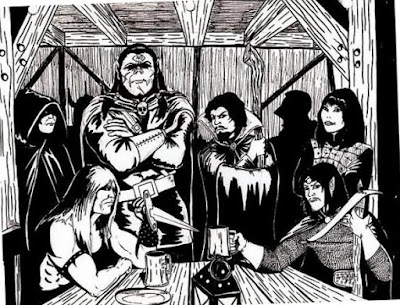 Gonzo or not many of these elements defy and crossover into the region of science fantasy whist switching gears into the sword and sorcery mode and  genre of AD&D and its ilk. There are a few options available in Secret Machines of the Star Spawn and hooks available to expand or contract the action as you see fit to take the campaign in a different direction. I do think that Secret Machines is a viable option to allow a DM to take their DCC campaign to the stars, having your party of adventurers surviving to get there is another matter entirely.
Posted by Needles at 2:14 PM