"Red dragons. Storm giants. Dragon rulers. Frost giants. They're all here, in this book, in complete, ready-to-play mini-adventures. No matter what level your characters are, there is something here for you (and them).

Need a diversion? Want to spice up a long-running campaign? Want to play, but don't have more than an hour or so? This is the book for your gaming group. As DM, you have everything you'll need to play right at your fingertips. As players, you'll have challenges worthy of your characters." 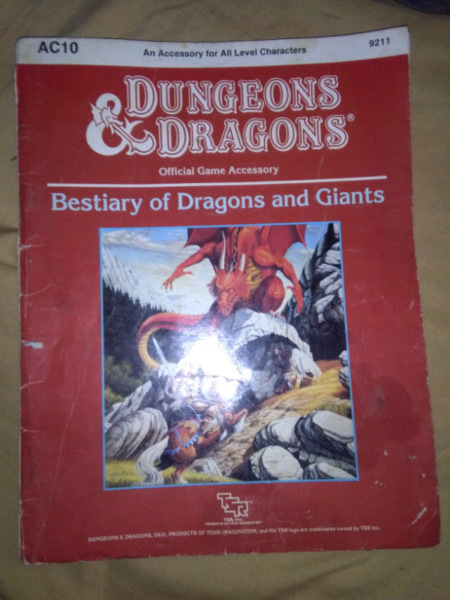 Eight seven was a bit of a rough year for me growing up transitioning in my home town from beloved grade school to high school. But Dungeons & Dragons mania was in full effect then & going into a local 'fundamentalist Christian' grade school/high school may have not been my smartest of moves. Why do I remember this so well? Two reasons the Satanic Panic was in full effect & the Dungeons & Dragons book that I was caught with at my local cavern of "holiness" was AC10 Bestiary of Dragons & Giants.
This book got me expelled for a week from the high school & was to study the King James Bible for a test when I got back. Going into high school I knew the King James front to back already having been exposed to it for years by ex hippy parents. But AC10 Bestiary of Dragons & Giants is not a bestiary at all as I learned on my forced school vacation. Instead its another series of short old school adventures by a whose who of old school writers & designers. The list of authors was/is a whose who of TSR staff writers & designers from '87 James M. Ward, Bruce Heard, Scott Bennie, Bob Blake, Deborah Christian, Vince Garcia, Thomas Kane, John Nephew, Steve Perrin, Warren Spector, Caroline Spector,Rick Swan, John Terra, Gary Thomas, & Ray Winninger


So what is the AC10 Bestiary of Dragons & Giants book?
Its actually a well written series of anthology adventures connected by stringing together use of Dragons & Giants. Yes,Mayfair games had been doing similar monster ecology/adventure themed books around this same time. But these were officially lisenienced Basic Dungeons & Dragons adventures centered around   the cloud giant, fire giant, frost giant, mountain giant, stone giant, and storm giant as well as the black dragon, green dragon, red dragon, and white dragon, plus the ruby dragon & Opal the Sun Dragon! These adventures were meant to be run at the drop of a hat when you've got fifteen minutes before the players show up at your door!
AC10 was also another in a series of adventure anthology tittles from TSR in '87 which included B9 Castle Caldwall & Beyond which I covered yesterday on the blog.
AC10 Bestiary of Dragons & Giants has some really major innovations which are mostly forgotten today was the Draconic Spell Generator which according to the Drivethrurpg product entry had a few flaws; " The draconic "Spell Generator". It had to be hand constructed from cardstock sheets, but when it was complete, it could be slid around to randomly generate spells for arcane and divine draconic casters alike.
Unfortunately a major printing error meant that players had to cut out many of the device's spell windows by hand. Despite this issue, this gaming accessory with its actual moving parts was a real innovation for TSR, matched only by the AD&D Fighting Wheel (1981). It was also a nice innovation for the "AC" series, which had already expanded the boundaries of production with its Dragon Tiles." This added a whole other aspect to the already expansive B/X game during this time. But its the monster expansion that really counts here. 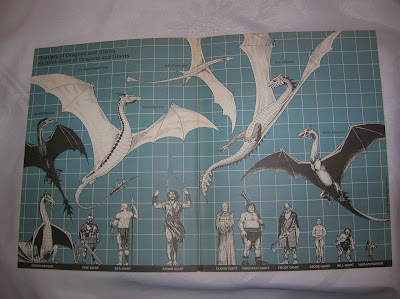 There's a secondary type of Mountain giants in AC10 Bestiary of Dragons & Giants that are super dangerous to PC's for the sheer variety of flavors of malice & malevolence that they come in; "Mountain Giants. Since hill giants were one of the earliest D&D giant races, it's only natural that someone asked the question, "But what happens when the hills become mountains?" In fact, Louis Boschelli asked the question first in the Fiend Folio (1981) for AD&D; his creation then became a Citadel miniature in February 1982 as part of their "Fiend Factory" line. This oafish, rock-throwing clod was pretty similar to its hill giant kin.
Basic D&D introduced its own Mountain Giant in Master Rules (1985). This new variant of Mountain Giant wasn't necessarily meant to match its Fiend Folio brethren. It could also throw boulders, but it was bigger and tougher than its AD&D kin. In fact, it could run as high as 20 HD, making it the toughest giant on record."
Yes I'm doing lot of copying & pasting when it comes to AC10 Bestiary of Dragons & Giants but its really interesting & mostly forgotten monster & adventure  book these days. The real innovation was the gem stone dragons & how they relate to the expansive Basic/Expert/B/X cyclopedia dragons;
" The ruby dragon was one of Basic D&D's gemstone dragons. The idea of gem-like dragons also originated in AD&D, as gem dragons; in The Dragon #37 (May 1980), Arthur W. Collins wondered, if chromatic dragons are evil and metal dragons are good, what sorts of dragons are neutral? He then laid out a set of five dragons that answered the question.
The gemstone dragons of Basic D&D again aren't actually the same as the gem dragons of AD&D, in large part because they don't have a natural niche. Instead of being the neutral dragons, they cover the gamut of alignments from lawful through neutral to chaotic. They're mainly intended to trick players, because the five original gemstone dragons look almost exactly like the five chromatic dragons. The Master Rules thus details: crystal, onyx, jade, sapphire, and ruby dragons. A brown dragon in that book (which looks like a gold dragon) later became the amber dragon. The Dragon Rulers of Basic D&D are apparently precious stones too: the Pearl chaotic ruler, the Opal neutral ruler, and the Diamond lawful ruler all debuted in the Master Rules too."
This is all directly related to the AC9 The Creature Catalog which is considered by many dungeon masters & players to be one of the most perfect monster books published by TSR during the mid to late 80's period. The monster ecology articles had been going in Dragon magazine for a long time by the time the Creature Catalog & AC10 Bestiary of Dragons & Giants had hit the shelves. But the D&D lore had already been established by this time & so this simply took monsters in several other optional directions. 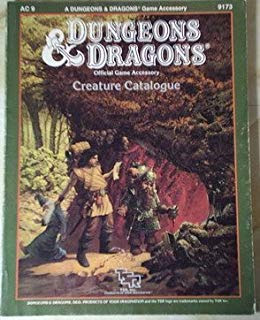