There are times in my life where film crosses a bit of a line with me, the line into memory, feelings, etc.. Mandy seems like a simple revenge picture suffused with elements of 2018 phantasmagorical CGI & beautiful technological film techniques. And it is. Check out the trailer.


But last night I sat down to watch this film.I rewatched it a second time to make sure that the brutal head trauma that my brain went through was there. This film is a nihilistic journey of revenge for the main character the life Red Miller (Nicolas Cage) shares with his girlfriend, Mandy Bloom (Andrea Riseborough). All is shattered when a cult of hippy psychos takes Mandy Bloom & Red goes on to forge his +3 battle axe of doom. Then goes on a full blown trail of the dark path of meifumadō ("The Road to Hell").Director Panos Cosmatos takes the viewer on a crimson laced  occult  journey of nihilistic revenge & the theater of the absurd in the face of life.But this is the tragic face of the senseless brutality of murder & plain old revenge with many grind house twists & turns.
If Dungeon Crawl Classics & Lamentations of the Flame Princess had a modern baby this would be it. Mandy isn't a film its a DCC funnel come to life in psychotic blistering crimson laced occult B movie goodness with an art house candy coating. 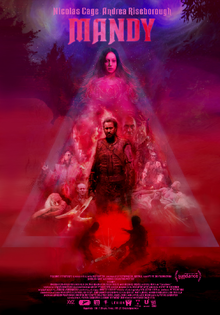 Change the protagonist of Mandy to a PC & this might as well be the latest Lamentations of the Flame Princess adventure release. This film isn't trying to save the world or change it, its very similar to a Kihachi Okamoto samurai film. The characters are often outsiders to their environments & Red is the same doom laden path of revenge. "Kihachi Okamoto characters are often estranged from their environments, and their violence is a flawed reaction to this" In this regard Nichols Cage is very much in the same mold as Robert Howard's original Conan. A barbarian whose world has been eclipsed by the onslaught of the coming era. The use of the nihilistic & absurd fiddly bits of the philosophy of the film are done with flourish & on purpose with a marked inversion of the journey of the hero. This is not the Joseph Campbell's Journey of the Hero but the dark linked path of its opposite number. But does Mandy have anything to do with Dungeons & Dragons as a whole besides being one of 2018 most 'metal' films? The themes of nihilism, gore, & 'the theater of the absurd' seem to have little to do with D&D but the fate of Red Miller's revenge does 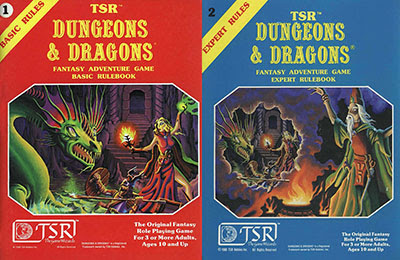 This same twist of fate of the here has often befell many a B/X campaign back when the film was set in Eighty Three. The PC's on the same path of revenge often having 'a death by farmer' end to such an adventure path.
Are there lessons in Mandy for the dungeon master? Yes I know so. The homages & pacing of the film point to a very careful director & behind the scenes crew whose influence was suffused with elements of Heavy Metal bands, dark fantasy novels, elements of HP Lovecraft's circle of writers & all pop culture elements. If the film 'Mandy''s plot  was taken out of the modern & thrown into the dark fantasy world of Dungeons & Dragons then it would make the prime motivator & driver for getting a party of adventurers together. They might be driven down the dark path of meifumadō ("The Road to Hell") which makes 'Mandy' have many similar elements to the Lone Wolf and Cub Kozure Ōkami, "Wolf taking along his child"  by writer Kazuo Koike and artist Goseki Kojima manga first published in 1970.
Mandy is a harsh & brutal film but its honest & very bloody. The nihilism of the film reminds me of Clive Barker's Hellraiser film & the novel 'The Hell Bound Heart' which was done on purpose. I'm really trying to vomit forth all of the impressions of the film that have been running through me since I watched it last night. This isn't a film for the faint of heart or the easily offended. This isn't one that you take grandma too unless your grandmother happens to be into these films. I've known a few in my time who would be. As for a rating I think that this film isn't going to go into a box quietly.  The ratings for this one go from one star to four depending upon your style.