Many adventurers encounter the rare Dwarven female warriors known as Aresui out in the fields of battle. These mercenary lady warriors do not want the traditional mine ownership & business opportunities that they are afforded by Dwarven society. Instead they seek adventure & are driven by the blood fury of the Earth. Their veins pump with the seething violence of their family's warrior legacies & they cleave to the sound of glory & battle. Many Aresui become adventurers among mankind. They seek out the places deep, dank, & dangerous where the ancient enemies of the Dwarves still hide.
To denote their status among Dwarven kind they often have various practical small pieces of equipment woven into their facial beards. Many Aresui often follow Berronar, the dwarven goddess of safety, truth, and home. 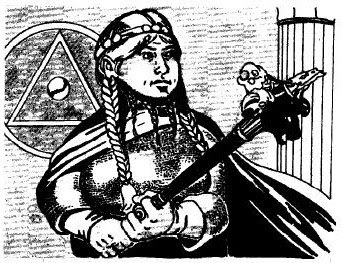 Those that survive the mercenary life often become successful mine owners in their own rights. They manage their business's fortunes with a deft hand that they've acquired from the world of man. Many Aresui are still shrewd tacticians & military leaders well into their late five hundreds. They use their mines & earth works as cover to seek out & exterminate the most dangerous enemies of the Dwarven race. For the younger lady warriors the mercenary life is a rite of passage seen as a twisted path of insanity among the Dwarven traditionalists & familial councils. Many Aresui are brought before such councils for 'dressing down' when visiting their traditional familial homes.
The trinkets, jewels, & small ornamental weaponry denotes a status of rebellion woven into the beards of the Aresui. They wear them proudly & there have been murders among humans who have besmirched the honor too far among these alien beings.

Among The Beards of Lady Dwarven Warriors

Artwork used without permission copyright & trademarked to the artist & Wizards of the Coast. No copyright infringement or trademark violation is implied. All text & ideas are @ Dark Corner Productions 2018. This blog post is for educational & entertainment purposes only.
Posted by Needles at 9:21 AM