"The final confrontation with the giant, King Snurre, and the entry of mighty adventurers into the cavers under his stronghold discovered that Dark Elves, the Drow, had instigated the giant alliance and its warfare upon mankind and its allied races."

D1-2 Descent  Into The Depths of the Earth by Gary Gygax is one of those modules that fascinates me & yet intimates the Hell out of me. The reason that D1-2 used to scare the Hell out of me is the modular nature of this adventure. D1-2 were part of 'the cycle of modules & adventures that made up the heart of Advanced Dungeons & Dragons.
"When combined with the G-series and Q module as the Queen of the Spiders, the D-series was voted the single greatest adventure of all time by Dungeon magazine in 2004.[3] Reviewer Alan Kohler said, "The Underdark has become a classic place to set adventures... This is where it all got started."[3] According to the editors, Vault of the Drow would have made the top five if it had been considered as a single module."
For many old school players these modules are Advanced Dungeons & Dragons but in fact their so much more then simply the building blocks of a famous & beloved brand. 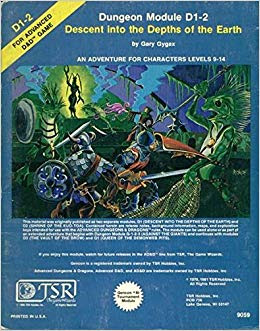 The reason is the module's history & background as the wiki entry's intro states;
"Descent Into the Depths of the Earth[2] is an adventure module for the Dungeons & Dragons (D&D) fantasy roleplaying game coded D1–2. It was written by Gary Gygax, and combines two previously published modules from 1978, the original Descent into the Depths of the Earth and Shrine of the Kuo-Toa. A sequel to the first two modules, Vault of the Drow, was also published in 1978. All of these D-series modules were produced for use with the 1st edition Advanced Dungeons & Dragons (AD&D) rules.
The D-series itself is part of a larger overall campaign of adventures set in the World of Greyhawk campaign setting. The overall campaign begins with the three modules in the Against the Giants series, continues through the D-series, and concludes with module Q1 Queen of the Demonweb Pits. The latter segments of the campaign, including the D-series and module Q1, are set in a vast network of caverns and tunnels called the Underdark."
This modules starts out with characters from levels nine through fourteen & then ten through fourteen. In OSR terms this puts the PC at the end of their adventuring careers in most retroclones. Notice I said most but not all. D1-2 could in fact be the perfect template to create a mega dungeon adventure environment for PC's to explore & die in.  Much of D1-2 Descent Into the Depths of the Earth are the first time we really begin to see the alien environment of the Underdark. But with a bit of a push these adventure locations could become the Underworld.  The real stars in D1-2 are the Drow, the Kuo-Toa, & the Deep Gnomes or Svirfneblin.
I always felt reading through D1-2 Descent Into the Depths of the Earth that Ragnarok had already happened & any moment the PC's were going to stumbled upon a former battle field of the gods where there were the  dead & decaying demi gods stared out from walls or the caverns floors with empty eyes. The Grimlock tribes that serve the Drow are all that's left of the descendants of those who came before.

The various tribes of Drow are the remains of the Dark Elven nations straight out of Norse mythology that fought along side of Loki & the Ice Giants forces during  the events of Ragnarok. Hence why there are such close ties between the Drow & the giant races. The Greco Roman gods are gone allowing the Drow to have taken over vast tracks of the Underworld.
But are the Drow going to be satisfied with their holdings within the Underworld? Hell, no they want more. So they've allied themselves with a spider demon goddess & have taken on the mantle of the Underworld. 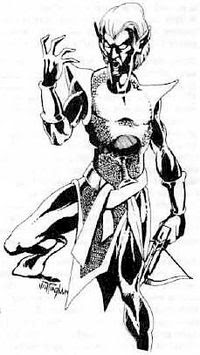 But the void left behind by the death of the gods has allowed many races to slip into positions of power within the contemporary underworld realm of D1-2 allowing the monsters to flourish & prosper beyond the known limits. This is part of the charm of the older modules how modular they can be & how they can be customized to the requirements of the campaign that the players & the dungeon master have mapped out.

There's something so well rounded about the way that D1-2 Descent Into The Depths of the Earth By Gary Gygax handles itself that has contributed to making it such an iconic set of modules. Some of the reasons are as follows: