Blood & Webs - An Alternative Ecology For The Ettercap For Dungeons & Dragons

I'm an unapologetic AD&D first edition Fiend Folio fan & user of all of the insane monsters within that incredible game book. The monsters in the Fiend Folio have served me very well & perhaps a bit too well. I've used all them from the first time I got the book & thumbed through it again & again for hours on end. 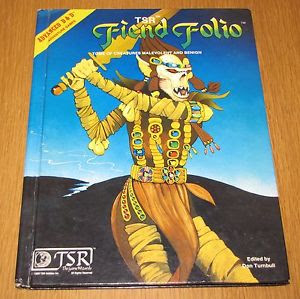 Among my absolute favorite Fiend Folio monsters is the Ettercap created from the life blood verse of Tolkein's Bilbo Baggins Hobbit. The Ettercap is a humanoid spider monster with the features of an insane man & the abilities of a spider. They are expert poisoners, web & trap builders, & very sneaky as well as stealthy in the extreme.
Wiki lists them as; "An ettercap is a race of bestial spider-men aberrations in the Dungeons & Dragons fantasy roleplaying game" But there's some very interesting fiddly bits & pieces about the Ettercap. First they are found in temperate locations such as forests, swamps, etc. & they are a nightmare in their home environment. Imagine making camp under the large noses of something like this. 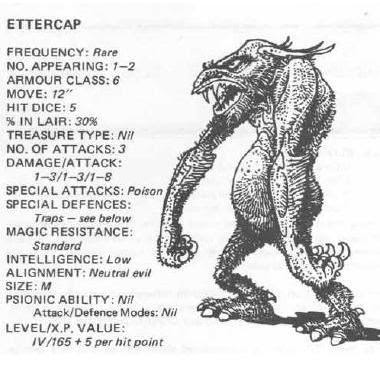 They have an AC of six & there's a thirty percent chance of encountering them in their lairs which are going to be an obstacle course of webbed booby traps, dead falls, trip wires, & possibly even webbed poison walls. They attack like ninja using the natural terrain to their advantage & they keep loyal pet spiders. Even though their intelligence is low they are very cagey & cunning using pack tactics to take down larger groups of adventurers.
Adventurers don't actually stand a chance against these things because of the traps they lay & the fact that their senses are so keen. Ettercaps are going to strike at night & we can draw several conclusions from Russ Nicholson's Fiend Folio artwork.
First there are the eyes which seem to indicate binocular vision on these humanoid spiderlike beings & that huge nose. So we've got a monster with low light vision & a keen sense of smell. The claws are massive & look razor sharp along with the claws on the feet perfect for climbing trees & maneuvering through their forest environment.
But where did the Ettercap come from to begin with? There are several theories in mythology over the years strongly connected with much of the lore of Dungeons & Dragon's later editions. But I've got my own campaign origin for these monsters for they are the spawn of  Arachne the spider goddess  of Greek mythology even though her origin goes back much further. The most popular story of Arachne comes from the poet Ovid;
"
One version appears in the Metamorphoses of the Roman poet Ovid.
In this version, Arachne was a shepherd's daughter who began weaving at an early age. She became a great weaver, boasted that her skill was greater than that of Athena, and refused to acknowledge that her skill came, in part at least, from the goddess. Athena took offense and set up a contest between them. Presenting herself as an old lady, she approached the boasting girl and warned: "You can never compare to any of the gods. Plead for forgiveness and Athena might spare your soul."
"Ha! I only speak the truth and if Athena thinks otherwise then let her come down and challenge me herself," Arachne replied. Athena removed her disguise and appeared in shimmering glory, clad in a sparkling white chiton. The two began weaving straight away. Athena's weaving represented four separate contests between mortals and the gods in which the gods punished mortals for setting themselves as equals of the gods. Arachne's weaving depicted ways that the gods had misled and abused mortals, particularly Zeus, tricking and seducing many women. When Athena saw that Arachne had not only insulted the gods but done so with a work far more beautiful than Athena's own, she was enraged. She ripped Arachne's work to shreds and hit her on the head three times. Terrified and ashamed, Arachne hanged herself. Then Athena said, "Live on then, and yet hang, condemned one, but, lest you are careless in future, this same condition is declared, in punishment, against your descendants, to the last generation!" After saying this she sprinkled her with the juice of Hecate's herb, and immediately at the touch of this dark poison, Arachne's hair fell out. With it went her nose and ears, her head shrank to the smallest size, and her whole body became tiny. Her slender fingers stuck to her sides as legs, the rest is belly, from which she still spins a thread, and, as a spider, weaves her ancient web."[4] This showed how goddesses punished mortals who dared to insult them." 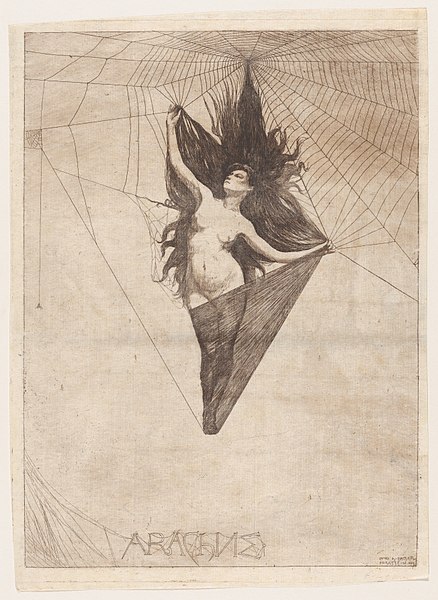 There is mythological evidence that the goddess had prophetic abilities & the abilities to divine the affairs of the gods. Her children inherited her bitterness toward the gods & their chosen heroes. She was consigned to the underworld. Rumors abound of  Arachne being consulted by numerous dark gods, arch devils, demon lords, & many lower world powers some escaping her wrath barely. Many others  gaining knowledge only to be consumed by her crazed lust & insane hunger for the supernatural blood of the gods. 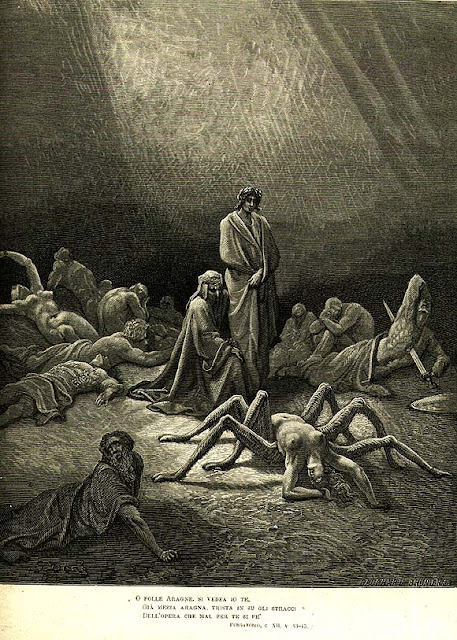 Her children were consigned to the furthest reaches of the planes & outer dimensions . The Ettercaps were   locked away from humanity for a time but they made war upon humanity. The bitterness of the Ettercap tribes knows no bounds even today. They still lurk on the outer fringes of the wildernesses & wastelands of many lands even to this day. Ettercap mercenaries & assassins were renowned in supernatural circles for their violence & ferocity in military operations of sabotage. 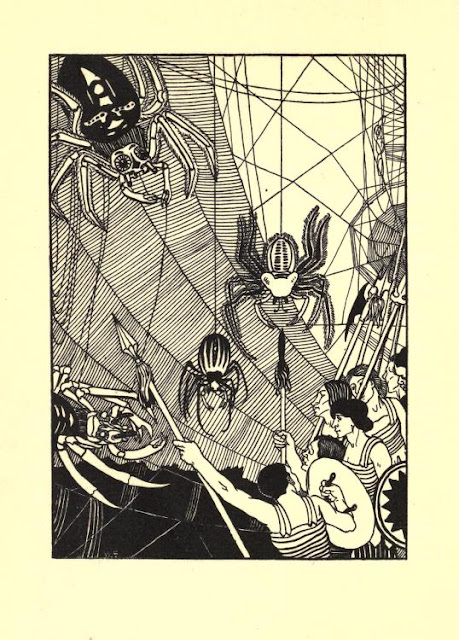 
The Ettercap tribes have deep ties with the spiders of Leng in Earth's far future Dreamlands & with the spider creatures of Zothique. The Ettercap have a strong but murky tie with the spider goddess Atlach-Nacha as she is served by several tribes of the monsters. These worshipers are of slightly more dangerous variety of the Ettercap  as they share the hatred of being disturbed from their devotion to their spider goddess. Her divine work of bridging the waking world & the Dreamlands is seen as all consuming. The Ettercaps of
Atlach-Nacha are some of the best trap makers & engineers in existence. They may be summoned by a monster summoning spell but must be paid with a live student of the arts & an offering of at least 780 gems worth of treasure before they will entertain a temporary assignment. 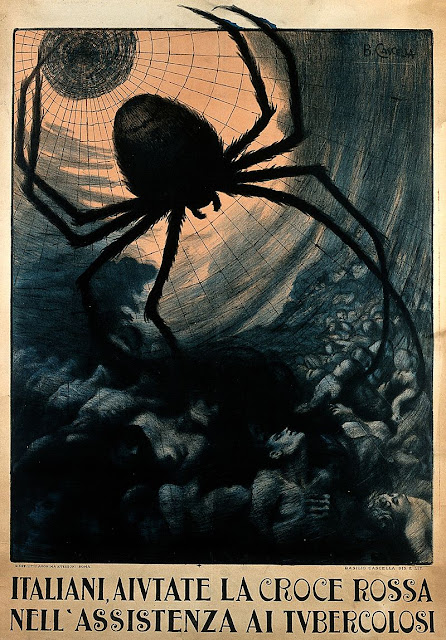 These creatures are sometimes employed by certain forbidden cults to create divine traps & divine dead falls in the name of their forbidden gods. Some divine dungeons & strange ruins taken over by these horrid cults often have supernaturally consigned dungeon engineers who built & maintain the tricks & traps.
These Ettrcap live for the day when the Earth will be cleared of humanity & they can once again take their rightful place under a blotted red sun.