Glynn Seal of Monkey Blood design has been quietly building his Midderland setting empire with product across the board for old school & OSR games. The Midderlands setting is a dark fantasy England on acid filtered through the warped imagination of early White Dwarf magazine fans wrapped around a Swords & Wizardry rpg core rules set. This brings me to issue #1 of The Midderzine from Glynn Seal & the Monkey Blood crew. 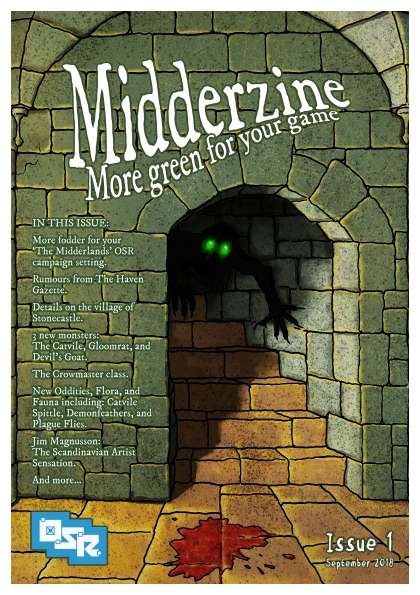 So what's in this issue & why is the Midderzine important to OSR fans?! Well here's what's in the zine; "an interview with Jim Magnusson, 'news' from The Haven Gazette, 3 Hex Locations, The Village of Stonecastle, The Eyeless Harrowers cult, two new NPCs, three new monsters, a new class - Crowmaster, two new spells, five new oddities, four new flora and fauna."
Even if you haven't gotten the Midderlands setting or the Midderlands Expanded book this has some very interesting fiddly bits & pieces that can be applied to bring the Midderlands to your gaming world. For example 'news' from The Haven Gazette are adventure seeds & hooks to get the PC's involved with the locals of this region. But here the adventure hooks pull the PC's in for example the local leper knights have a new expansion; The Leper Knights of Saint Corrobin in Helm’s Ford "In Helm’s Ford last week, the growing group known as the Leper Knights ofSaint Corrobin were granted rights to erect a monastery on the outskirts of the‘Without’ part of town. Many of the townsfolk are unhappy about the close proximity to the disfigured andcontagious outcasts, but Lord Porc Turmeric has confirmed that they are part of a defensive strategy for the town and anyone who obstructs the rights afforded to them will be dealt with harshly." What happens when some of the locals hire the PC's to help clean out some 'undesirables' from the village?! This is only one of the many examples that are woven throughout the Midderzine. The big selling point of the Midderlands is the Gloomuim - A green magick glowing stone like substance that is in fact concentrated magical chaos that can mutate things, be used for magical items, to power spells, mutate animals & flora into monsters,etc. & it permeates every aspect of this dark fantasy England. The 11 adventure seeds & hooks all tie directly back into the settings & the locals making it very dangerous for PCs! 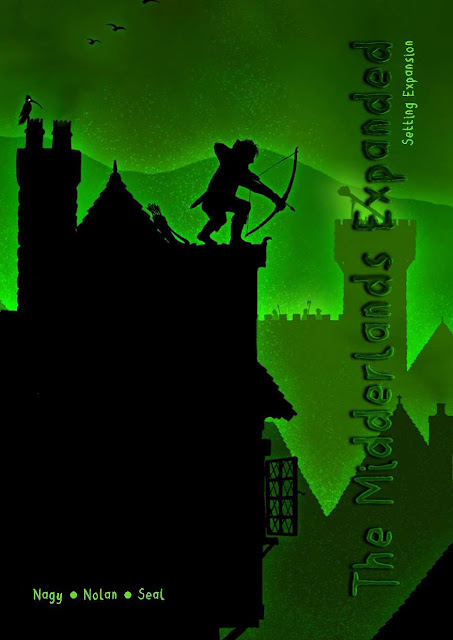 Next we get three new hex locations & all that entail these seem like they came straight out of an early issue of  White Dwarf but they have the unique Midderlands spin to them. That is to say they might be based on some possible real world historical location or other. But these locations always have that green laced weirdness factor that makes the Midderlands unique. We get the 'Plinth of Dullen Fields' with its own take on the possessed royals bit; 'It is said that a witch hexed the oldLord of Shroomsbury, and he became possessed by a devil. Staffleford had acted to prevent the malignancy from spreading. However, the Lord of Shroomsbury also believed the same about the Lord of Staffleford, and had acted in the same manner.' And there's some room here for the dungeon master to really go to town on what else its connected to in their own version of the Midderlands.  'The Ruins of The Cock &Pocket Inn' might be the enterance to a dungeon or underground green hued ruin or something far more sinister. Then there's 'Ratdog Tor' & its deep connection to the twisted monstrosities of the Midderlands. I don't want to go into too much detail here but you get the idea.
Then we get the village of Stonecastle," The village of Stonecastle is ruled over by the Fellchurch family, and the current ruler is Sir Uriah Fellchurch (see The Midderlands Expanded page 182). Sir Fellchurch treats the villagers
well, and they respect him." And we get a whole village setting for the asking where adventurers might actually have a quiet time of it. Well, of course they won't be cause there's more brewing under the surface.
Speaking of brewing we get a brand new cult of eyeless ale brewers known as 'The Eyeless Harrowers' whose ales grace the local taverns throughout the region. These incredibly evocative NPC's have some far more things happening under the tap then you might think & might also be NPC patrons rather then foes!?
Two mid teir NPC's are next who come with their own adventure hooks build in;"Edmund
Fester travels the Western Midderlands with his fellow adventurers; the human thief, Vex Vandel. Then there's this information broker whose not the usual sort; 'Corlin Lackcraw is in
the discrete service of Sir Uriah Fellchurch. He dispatches Corlin around the lands to see what the crows are saying, and feedback any information that may be of use to
Stonecastle.'
We've got three new monsters from 'the Midderlands' including Gloomrats who are absolutely nasty bastards! 'Catviles are large cats devoid of fur, instead being covered allover
with loose, dark, light absorbing skin. ', which I personally want a Catvile as a pet! Check these things out!

This takes me into the demonic 'Devil Goat' & I've seen a couple of different versions of a monster called a 'Devil goat' but this is a disembodied demonic goat head with tentacles & a passion for evil! These things are really nasty & even seasoned adventurers are going to have problems!
Then we are presented with a brand new class known as the Crowmaster! These are men & women who spend years out on the moors & forests listening to the language of Corvids! This folks know all of the gossip & spinets of rumors & information that these birds collect. They advance up in levels & have very tight relationships with these birds. Imagining royals having spy net works of crows, jays, etc. throughout their kingdoms! Well don't imagine it because that's the sort of weirdness of the Midderlands.


We then get two new spells 'covered in shit' & 'bag of crap' which is both pretty great. The covered in shit spell is a second level spell & does exactly what it sounds like. The second spell allows a magic user, druid, or cleric to reach into a leather bag & pull out a useful item or maybe not. The random tables of the Midderlands expanded book has the dungeon master covered but I'd make my own. Its an amusing second level spell for the players.
Finally we get bunch of new Midderlands oddities which are solid magic items strongly connected with the Midderlands setting itself. All in all we get a solid setting fanzine that has been set up by the Monkey Blood design crew & Glynn Seal to act as both fan support & as a solid way of continuing the expanding setting of the Midderlands. That being said I think that it could be be bought by an OSR gamer to really get a good foot hold into the Midderland's setting to really get a feel for it's green laiden weirdness! I'd actually say its a five out of five for its utility & usefulness as a game supplement even if you don't own a single Midderlands book!

For about four dollars American you get the complete PDF right over here!
Posted by Needles at 1:46 PM