"Most everyone wants an edge, an angle that allows them to take that extra step, achieve that extra goal, to surprise the enemy. This angle, in hard fought battles with certain loss, can turn and snatch victory from the jaws of disaster.
Expanding Classes is just that angle. Herein we delve into the 13 standard C&C classes, and the Rune Mark, and unleash the power of multiclassing, enhanced classes and switching classes." 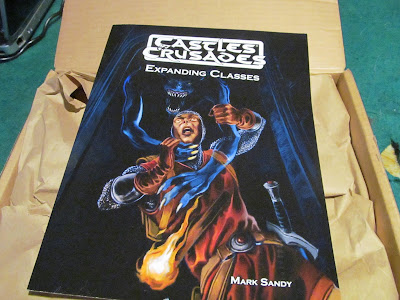 Alright so let's talk Castles & Crusades rpg down home OSR crunch with Expanding Character Classes. This is an older 2016 release but its a vital book for several reasons first of which is the multi classing rules for C&C which are almost but not quite the same as the old Advanced Dungeons & Dragons first edition rules. The second of which is expansion of the multi class rules for Castles & Crusades as well as expansion of the levels of the game. This where the enhanced PC classes come into play. Then there's zero classing or 'class plus' where you get a zero level in one class while switching over to your regular PC class. This costs a five percent tithe of experience points & its sort of a weak option for saying that your PC is a failed mage or monk.
Finally we get dual classing which is a bit different then the usual AD&D first edition fare.Here the player's PC has switched classes in mid flow & found another class to their liking or livelihood. Once second class is chosen the XP is divided between the two classes & it can hurt a bit. But its a viable option for certain types of circumstances.
The final area of  Expanding Character Classes is the familiar reclassing   rules straight from original Dungeons & Dragons where the player abandons one class for another completely. John D from the Castles & Crusade forums nails the 'Enhanced Class';
Can someone provide clarification to Enhanced Class?

Take the case of a new character, a Fighter supported by Assassin.

At the start the character has all Fighter abilities plus the Skills & Abilities listed on Table 2.3A on page 6. Instead of a d10 for HP the character uses a d8 as per Table 2.1.

As the character adventures, 2nd level will be reached at 2001 + 876 = 2877 XP at which point he/she gains the usual Fighter abilities as well as Death Attack and Sneak Attack as per Table 2.3A."
But is Expanding Character Classes worth the money?! Well in two words I think so! There's a lot of newer players to Castles & Crusades who have no idea that these types of optional rules were available to players in classic 70's & even 90's Dragon magazines. There's another factor to consider here the fact that this is 2016 product but the options presented are in line with the best of C&C's slick system & over all gaming system themes. This makes the book a must have for me a completest. These optional PC systems would later on be incorporated into other C&C books but having all the material in one book is a solid option. I'm going to be looking into Castles & Crusades Adventurer's Backpack coming up as well. I paid for this out of pocket & I'm very happy with the purchase.
Posted by Needles at 1:11 PM