"... and Lady Satan shall continue on at will!"
After being dormant for centuries, a spirit of ultimate evil stirs and seizes control of young Anne Jason's body. What follows is a violent struggle for control of a life that's been stolen... and to stop the will of Satan to be manifest on Earth.

Lady Satan 1974 is the first-ever collection of the entire series that first ran in Scream and Psycho magazines from Skywald Publishing. Hewetson's creation is a little remarked upon milestone in American comics history, as it was the first horror series to star an African American woman (even if she was possessed by a Bride of Satan for much of each of the four chapters)."

I have a very storied history with Skywald Publications going back to '74 when I found a stack of Scream & Nightmare magazines next to my uncle's Playboys he kept under his bed. The lurid & dangerously suggestive covers were indicative of the horror magazines of the time. This brings me to Skywald incarnation 's Lady Satan. So I asked Neulow Games Steve Miller to send me over their Lady Satan 1974 for review. 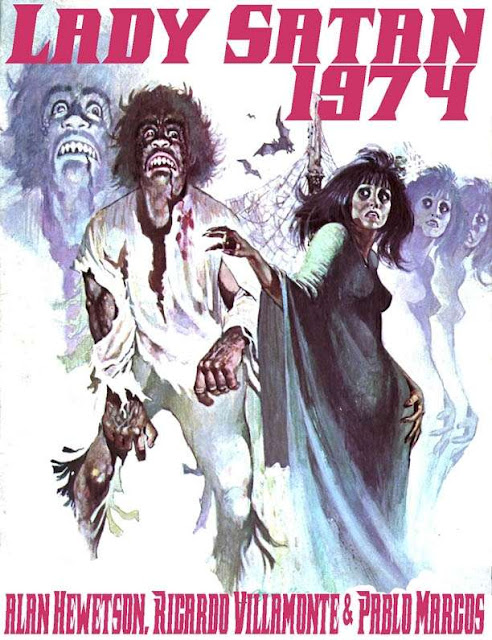 Lady Satan is one complicated horror anti hero character, & in fact might be considered by today's standards an out & out villain. Her origin is strongly connected with the Satanic revival of the Seventies & its occult Satanic cultist urban legend  horrors. Originally she was a Satanic cultist Anne whose spirit is taken over by  Anne, the evil "Black Witch of Salem." She becomes a bride of Satan (personally I think that this might be a pit fiend with delusions of grandeur & he's been playing her for the fool. Or this is Satan at a low point in the Seventies). Anyway she's got a very definitive split existence with her body shared between the pathetic & 'innocent' Anne or the blood thirsty Anne the Black Witch of Salem. She isn't murderous per say but its only a matter of time in my opinion. Some innocent or scum is going to get in her way & then all bets are off. This is a character who walks the razor's edge of evil  manic horror & is most likely will use it to cut down those around her. The Public Domain Super Hero entry on her bares this out here.

The cult of Satanists are straight outta Seventies horror comics especially those of the Marvel'  Tomb of Dracula, Ghostrider, & Warren horror magazines. Skywald horror magazines  always had their own feel, look, themes, & greater Skywaldverse lurking in the background of Scream, Nightmare, Psycho & their other horror magazines. Lady's Satan's powers are sort of nebulous but she can't die so I think we're dealing with an undead or demonic being here cast in the best Universal or Seventies horror monster mold. Neulow games  provides a very solid footing with Basic D20 rules for having two spirits inhabit one body, Satanic minions, cultists rules, etc. all of this is centered around the theme of comic book Seventies horror. Not too shabby at all for forty four pages. According to Public Domain Super Heroes site; "Lady Satan is sometimes referred to as the first African American female to star in her own stories, however Butterfly (also published by Skywald) debuted two years earlier"

The not so innocent Anne personality
erm spirit

From her appearances in Scream and Psycho magazines from Skywald Publishing Lady Satan is one very dangerous character & most likely an incredibly dangerous NPC character that only experienced party's of adventurers should encounter. Why do I say this? Because Anne The Black Witch of Salem personality is about 10 seconds in the future of taking full control of that Satanic cult that brought her back into the world of 1974. The D20 Basic Rules state it right out; "These rules are designed with OGL Modern in mind, but the majority of them are easily incorporated into other d20 System games. While much of this material is perhaps best suited for NPCs, a reformed hero who is now battling against his former brothers and sisters in the practice of evil." Yeah the world of 1974 saw the rise of supernatural anti  heroes like Marvel's Dracula,  Ghost Rider, The Son of Satan, etc. But their much older going back to the Golden Age of Comics with  Pep Comics Madam Satan.

Could it be that Anne, the evil "Black Witch of Salem " is actually much older then the cult realizes?! I think so. But its Lady Satan's  insanity & instability that worries me ;" In her first appearance, the innocent girl's name was given as "Anne Jason" however, in her second appearance (and without explanation), her name was given as "Anne Jackson " ,this indicates the NPC character's delicate  hold on sanity. 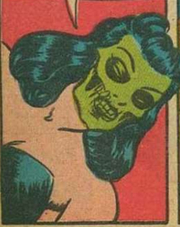 Many of these anti hero characters are as powerful as mid level AD&D style lich or minor demon. Who is going to want a potentially murderous  'Lady Satan' in their fair city?!
Any paladin or hero worth their salt is going to work on destroying them at the drop of a hat & that's where things get interesting. The Satanic cult that brought Anne, the evil "Black Witch of Salem" as lady Satan might in fact have been a transplanted group of Nazi operating in the back confines of a great American city. This might lead to the dungeon master operating a 'Dark Shadows' soap style campaign where he can bring in various threats to his fair city through a planar mechanism. In fact Lady Satan 1944 might be hunting for Anne, the evil "Black Witch of Salem ".

We've seen various incarnations of party's of adventurers cross over from Greyhawk in Gary Gygax's various Dragon Magazine articles into Gamma World & Boot Hill. Its not unreasonable to assume that given the scope of demonic & devil activity that a party of adventurers might magically be drawn into the modern world to hunt down the latest incarnation of evil especially one as potentially dangerous as Lady Satan! 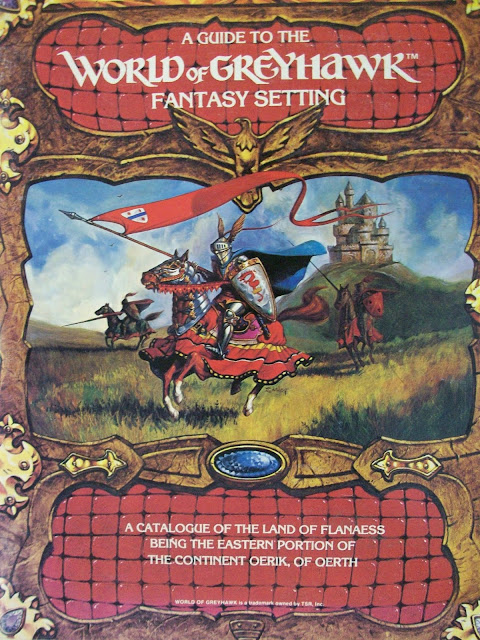 With a bit of time & energy Lady Satan has the potential to be a real headache for characters in any OSR or D20 game campaign. A dungeon master given some effort can turn Lady Satan into a fully fleshed out NPC of grand potential. I think this is a four outta five on Neulow Games part.