Introduction
Today I got the chance to go to a friends house as part of the VHS club I belong to and get glimpse at an ancient treasure beyond compare. The movie version of the original Battle Star Galactica episode 'Lost Planet of The Gods'. This episode is considered by many to be one of the very best of the original Battle Star Galactica run.
You can find an overview of the episode right over HERE
What really struck me was Kobol! According to Wiki :
'Within the context of both Battlestar Galactica stories, Kobol is the birthplace and original home of humanity, from which the civilization departed and formed the Twelve Colonies on other worlds.[1] According to legend, there was also a thirteenth tribe who settled on a "lost" colony, a planet called Earth, whose location remained a mystery to the populations of the other twelve.'
Why watch a VHS copy of this episode? Well because it contains a very important set of scenes that never were aired! They have quite a bit to do with the mega dungeons of Kobol. According to Wiki:
'In scenes that were filmed, but deleted from the final broadcast of the episodes, Captain Apollo explains that in its final days, Kobol was stricken with terrible overpopulation and waste. The surface and atmosphere of the planet were in fact so polluted that only the absolute strongest of creatures could still survive. After the human inhabitants of Kobol fled the planet and founded the colonies, they deliberately destroyed all of their technology and spacecraft; it took several centuries to rebuild even the most primitive ships for exploring the stars. The scene where this dialogue takes place was filmed for the episode "Lost Planet of the Gods", but only appears onscreen in the expanded telemovie version (it was edited out of the original airing)'
So they destroyed their technology and space craft hmm? Could some of it survived? And are there other secrets on Kobol?

Into The Void - The Secrets of Kobol

Commander Adama: The Book of the Word tells us that a great star guided the Lords of Kobol away from the dying planet, across an endless black sea.
Col. Tigh: The void? Adama, there are probably as many voids in the universe as there are ideas.

I posted the other day about possibly using Battle Star as a basis for a game but there are other possibilities!
According to wiki :
'Kobol orbits an irregular variable star, and its encompassing system of planets lies immediately adjacent to a "magnetic void". The people of Kobol developed space-faring technology, and within the story it is suggested that their population likely reached the limits inherent in occupying a single planet, and, coupled with other disasters or factors (such as the star around which Kobol revolves), motivated humans to leave the planet.
Eden was the name of a city on the planet, and, according to Commander Adama (Lorne Greene), was "the first to fall" to some unknown cataclysm'
Who knows what other secrets Kobol may hold. The planet is still within the magnetic void. There are possibly some Cylon warriors left behind to stand watch should any others find this world. Then there are thousands and thousands of miles of ruins, pyramids, dungeons, and the Lords know what else waiting for others to find it.
I was struck by several things watching this telemovie. One there are miles and miles of  ruins. The whole planet seems very Earth like and why the Biblical themed destroying of all technology? There might still be some of this technology left in the ruins of museums, schools, and certain houses of worship as well as the old seats of governmental power.
Major Spoilers Ahead :
According to wiki,
'Adama performs the ceremony, Boxey as the protector gives Serina away. During the ceremony a bright star appears and Adama orders Tigh to scan for a planet in orbit. Apollo asks Adama what it could be and Adama says it could be the planet Kobol.

The Colonials land on the surface of the planet, where there are pyramids and ruins. Adama chooses a site for a camp, and posts a guard even though the planet is supposed to be dead.
Lucifer reports to Baltar that a star has appeared and guided Galactica to a dead planet. Baltar recognizes a chance to spring a trap, and orders Lucifer to prepare his craft. He will go alone, for only he can bring Galactica back to the Imperious Leader.
Adama, Serina, and Apollo explore the ruins. Adama suspects that it might be Eden, the largest city and the first to fall. Adama recognizes the seal of the Ninth Lord of Kobol. He was the last leader of Kobol before the thirteen tribes went to the stars. Apollo realizes that Adama is hoping to find the location of the thirteenth tribe (and Earth) by looking here.
The three find the entrance to the Tomb of the Ninth Lord of Kobol, which bears a warning of death for those that enter. Serina recognizes that Adama's medallion is the same as the seal on the tomb, and it acts as a key to open it.
They find the bodies of tomb robbers, and then are trapped by bars that descend, but lift when Adama uses his medallion again. They enter a room that appears to contain a sarcophagus.
Baltar enters through a different door, greeting Adama. Adama lunges at him, trying to strangle the traitor. Apollo pulls him off of Baltar, saying that he should be left to the council.
'

Quick Note about the Seal of the Twelve
According to the Battle Star Wiki :
The Seal of the Lords is a medallion that is the symbol of the Lords of Kobol. CommanderAdama normally wears this peculiar medallion with his commander's robes when in full dress.
He explains to Colonel Tigh that the medallion is a symbol of the Colonial faith as well as a symbol of power. The medallions are passed to members of the Quorum of Twelve; both he and the treasonous Lord Baltar have the last known surviving Seals.
The medallion is also used in the sealing ceremony, where the master of ceremonies wraps the medallion's chains around the bride and groom's hands as each holds the other's hands, with the medallion itself on top.
On Kobol, in search of answers to the whereabouts of Earth, Commander Adama uses the medallion as a key that opens the tomb of the Ninth Lord of Kobol, as well as to circumvent the cage-trap in the corridor leading to the tomb. The diamond-shape of the medallion also served as a mirror to reflect light to photo-sensitive eyes of the animal-figures within the tomb, thus opening the actual resting place beneath the faux sarcophagus (Lost Planet of the Gods, Part II).
You can find out more on the wiki right over HERE

This is the important bit,
' Adama suspects that it might be Eden, the largest city and the first to fall. Adama recognizes the seal of the Ninth Lord of Kobol. He was the last leader of Kobol before the thirteen tribes went to the stars. Apollo realizes that Adama is hoping to find the location of the thirteenth tribe (and Earth) by looking here.
The three find the entrance to the Tomb of the Ninth Lord of Kobol, which bears a warning of death for those that enter. Serina recognizes that Adama's medallion is the same as the seal on the tomb, and it acts as a key to open it.'I believe that the Lords of Kobol might have had some dealings with things best left undisturbed and they paid for it dearly
.

The Tomb world of Kobol 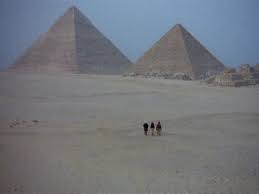 Kobol is a very interesting little world. Entirely desert and filled with ruins that look as if they stepped right out of the pages of a Egyptian tour book. The Lords of Kobol had ruled this world for generations with a super science without compare. Then one by one the worlds of the empire fell. This sounds suspiciously like another science fiction classic HERE
There are dark and some what ominous hints throughout the Battle Star Galactica series that mankind were pawns in greater moves by powers far beyond his ken.

The military and the religious seat of government on the world of Kobol were very closely tied together. There were sacred knowledge and secrets  passed down from generation to generation. The fall of man from Kobol is hinted at and teased about in the 'Book of The Word'. But only the mega-dungeons of Kobol hold the answer.