" As a member of a bold party of adventurers, you and your associates have trekked far into what seems to be a whole underworld of subterranean tunnels -- arteries connecting endless caves and caverns which honeycomb the foundations of the lands beneath the sun. Your expedition has dogged the heels of the Dark Elves who caused great woe and then fled underground. " 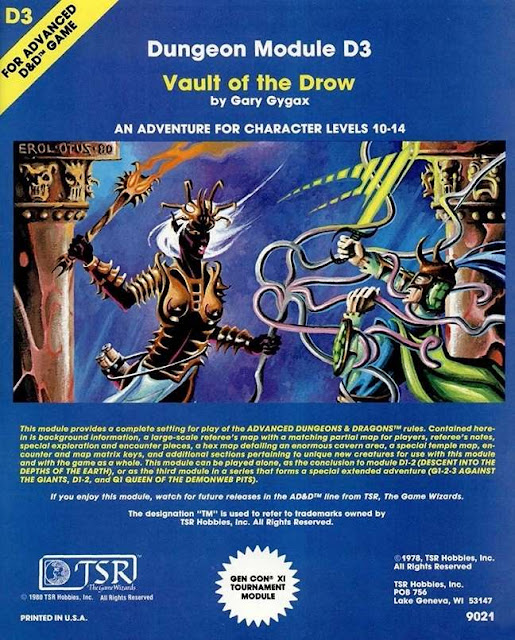 Is there a connection between the  Slavers 'A' series of adventures & D3 Descent Into The Depths of The Earth By Gary Gygax? You bet your PC's skin there is! That little package goes by the name of Edralve  a choatic evil cleric of Lolth whose been 'exiled'.  And has been acting as a slave lord throughout the whole 'A' series of adventures. According to the D&D Wiki;

"A native of Erelhei-Cinlu, Edralve was an exile from that city for some time during the late 560s to early 570s. By 574 CY, however, she had joined with Stalman Klim and other persons of malicious intent to form the Slave Lords, settling in the hidden city of Suderham in the Pomarj.
After the Slave Lords lost power in 580 CY, Edralve left the organization and returned to Erelhei-Cinlu."
"Edralve is a former protégé of Eclavdra and a former member of the Slave Lords." 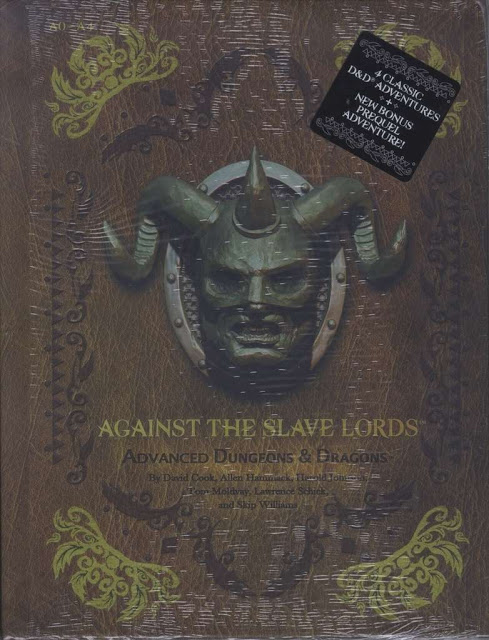 Yes that's right she survives the events of the slave lords modules & comes back to wreck havoc on the world! Some consider " The old Slavers series, the Yoko Ono of classic modules!" But what if the Slavers were part of a net work of conspiracy on Greyhawk & across the planes causing chaos in their wake. What if Edralve was working for the Drow the entire time of the events of the 'A' series of modules.
"As a member of a bold party of adventurers, you and your associates have trekked far into what seems to be a whole underworld of subterranean tunnels -- arteries connecting endless caves and caverns which honeycomb the foundations of the lands beneath the sun. Your expedition has dogged the heels of the Dark Elves who caused great woe and then fled underground. "

What if the Drow are behind all of the events of G1-G3: "Against the Giants"; D1-D2: "Descent into the Depths"; and Q1: "Queen of the Demonweb Pits"  including the slavers themselves. They finance the slavers like some 'Cold War' network of terrorists & spies weakening the infrastructure of Greyhawk & other campaign worlds making them ripe for the picking. This is after all the Drow way. They play the surface dwellers including the giants like fools. 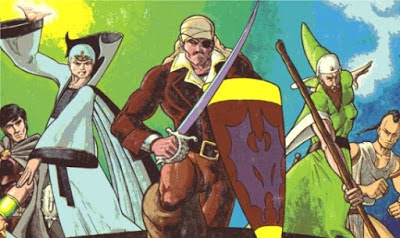 This is exactly how & why Lolth operates pitting one group of monsters against the humans whilst playing two ends against the middle. Their gold is holding up the giants from the 'G' series of adventures, their expertise is behind the rise in human on human violence, not to mention the raids in the middle of the night. The rise in the instability of the Greyhawk infrastructure is all their doing! The drow have the resources, the will, & the reasoning behind taking down the humans.

Oh I can hear the grumbling already what possible reason would the Drow be trying & succeeding to destablize the inner workings of Greyhawk. Hello, its organized chaos & mayhem two things the Drow not only excel at but make events bow to their wills! The destabilize the surface & then humanity follows! 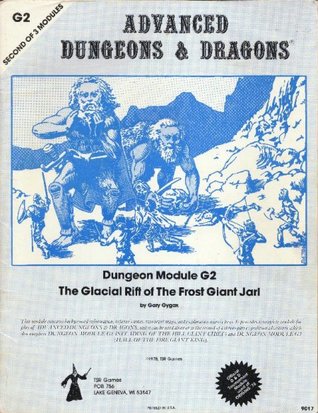 We can't stress how important these unseen connections of conspiracy are. They allow a DM to weave through decades of clutter & what not to be able to run the game that you want. The connection between Eclavdra may also lead into another of Highpoint's lucrative pass times namely piracy. This article contains a nice overview highpoit of this infamous adventure locations & more. Could the Drow be financing the slaver operation seen in U1 The Sinister Secret of Saltmarsh? 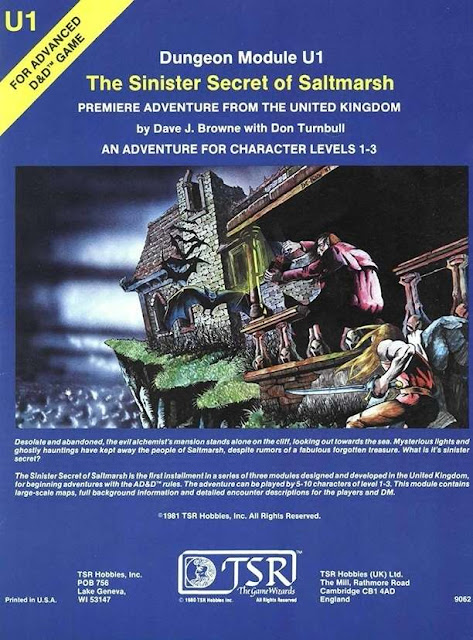 I believe the answer is yes & the connections are  much stronger then is implied in these simple modules for Advanced Dungeons & Dragons. The connections of conspiracy are there but what is the end game that the Drow are playing? We'll get into that tomorrow sometime.
Posted by Needles at 11:10 PM