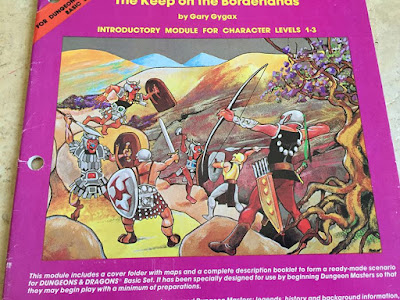 Ever since I was a kid, I've been obsessed with B2 Keep on The Borderlands for many years now. Last night I was looking into the history, backdrop, and as a jump off point for future campaigns. Keep on the Borderlands has so much history for me as a part of the swath of history of my gaming. This is the module that we as players and dungeon masters returned to again and again. The title of the module suggested something to me that echoed bits of Robert Howard's Conan and other classic pulp titles. Hell, we used this module for everything from Boot Hill, Gamma World first edition, Metamorphosis Alpha 1st edition , and even as a location for boot legging for Gang Busters minus the monsters but with cops and NPC's. 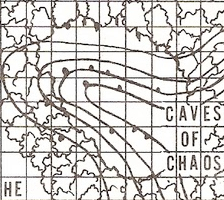 You can see an interesting video with the details on the background, history, and some of the details of B2 Keep On The Borderland module as well as the variations between the editions. There are so many echoes of cross popculture experiences with B2 that seem to happen to those of us who had the OD&D,Holmes, Moldvay, and Mentzer D&D editions. There are some subtle and not so subtle differences between the editions of B2.Artwork, cover images, and more colour the flavors and details of this adventure.

B2 has a smattering of a wide range of old school monsters that appear in The Keep on The Borderlands adventure setting; along with a nasty and very dangerous cult of evil which is starting to brew in the Caves of Chaos. There are a number of humanoid factions that can cause even an Expert level  party of adventurers more then a bit of pain. There is a great thread on B2The Keep on the Borderlands, Caves of Chaos with some wonderful resources including maps and some solid advice. There's also a Caves of Chaos Reimagined by Weem
which gives a really nice overview from the Caves themselves and the really weird structure and breakdown of the caves. These are the fountainhead of the corruption of the area. This gives a DM a perfect excuse  to expand the area with ruins and other opportunities for adventure encounters. This is especially true of the area around the mad hermit's lair.

There plenty of scope  to expand and detail the locations of B2 as your own, in the past I've placed the Keep and its environs on the edge of a country that has fallen into decay and decadence after fracturing into many minor baronies with swaths of wilderness between civilized lands. This gives plenty of room to place tribes of gnolls, orcs, kobolds,and more dangerous monsters where the DM wants and needs them. This also means changing the character of B2 to suit the DM's wants and needs for their campaign settings.  By using this option I was able to take a solo module in this case the Maze of the Riddling Minotaur and use it as a ruin just over the border in order to have it as a side quest for a party of mid and lower level adventurers to challenge the adventure and brave the maze of the minotaur. They had prior experience with this species of monster from B2.
Minotaurs are a monster that has been a part of D&D  since the beginning of the game;"The minotaur was one of the first monsters introduced in the earliest edition of the game, in the Dungeons & Dragons "white box" set (1974), where they were described as a bull-headed man, and a man-eater" In 1977 the minotaur as a monster came into AD&D with all of its viciousness preserved; "The minotaur appears in the first edition Monster Manual (1977), where it is described as a cruel man-eater, typically found in labyrinth the places in the wilderness and underground." 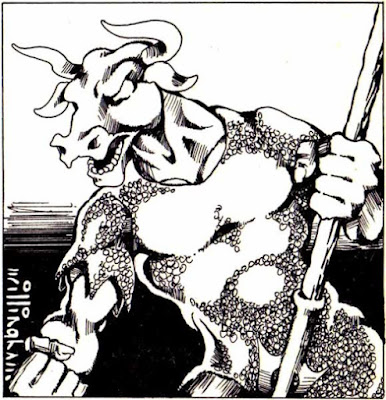 The Eighty Three adventure "Maze of the Riddling Minotaur" came out and I ran it as a complete side quest for my players by expanding the adventure with a few additional adventure elements from Dragon magazine. These included a NPC political plot as part of the adventure background and a few unique monster NPC's from the Creature Catalog I & II for some add flavor. The adventure is a perfect side jaunt;"Maze of the Riddling Minotaur is an adventure module published by TSR in 1983 for the Expert Set of the Dungeons & Dragons fantasy role-playing game. It is a solo adventure for one player character of level 1-10"
Vacros had a full blown background back tied into the Caves of Chaos and the minotaur in B2 was actually from the island of evil. This tied the two adventures quite neatly together. 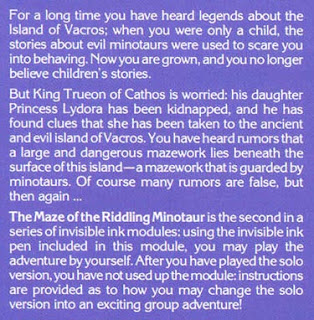 The ancient & evil Vacros was  a part of a decaying kingdom  now rife with horror,evil, and cults. This module has lots of bits and pieces that can be back imported into B2 to make an elaborate campaign setup and stepping stone. 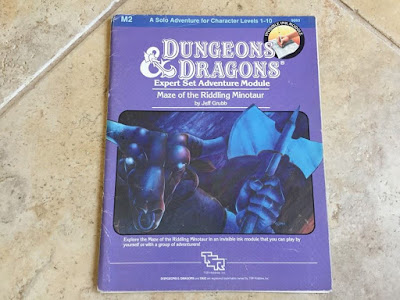 Minotaurs have always been one of my favorite servants of evil, I never understood the Minotaur race variation in Dragonlance ( I  personally have never been a fan of that setting and know nothing of it. If you enjoy Dragonlance more power too you). I quit AD&D at about the time when that campaign setting came out and I know nothing of it. For me the Minotaurs of  AD&D 1st edition are servants of chaos and evil. They  were and are my preferred monsters to place in both Blackmoor and Grayhawk as well as my own home game's settings. 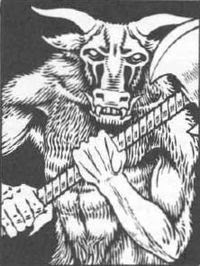 B2 Keep on The Borderland remains one of my all time favorite adventure modules to DM and run. It has lots of potential to take a campaign in the direction that the players and the dungeon master wants it too. With all of the the options that Keep on the Borderlands brings to the table it remains one of my all time favorites.
Posted by Needles at 9:59 PM