Its been a long while since I cracked open Carcosa Module six Barrens of Carcosa By Geoffrey McKinney.

The cover art by Luigi Castellani  depicts the Yellow Men of Dulaja worshiping a purple worm shoal. The cover artwork pretty much sets the tone for the module. Each of the Carcosa modules is a self contained module based not on Lamentations of the Flame Princess's retroclone system but instead Advanced Dungeons & Dragons 1st edition or OSRIC but they could easily be used with  LoFP. 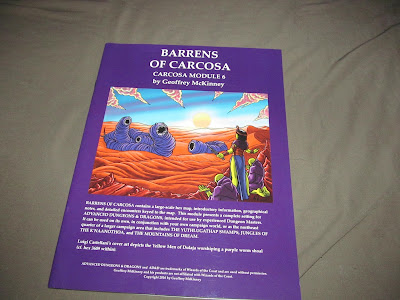 This module is a hex crawl in every sense of the word & it doesn't matter where you set your PC's down in the module. Module six has many of the elements that make Carcosa the unique experience that it is. There are lots of weird Lovecraft references, encounters with weird Spawn of Shub-Niggurath, & some very non traditional monsters. But this is module that's designed to be a bit more accessible because the stats in the module are AD&D first edition its a much more accessible module for a DM looking for a casual dip into the setting. Everything in the adventure is self contained & very DM friendly with a very brief overview of the module piece of Carcosa & all bits & pieces ready to go straight out of the gate.
" BARRENS OF CARCOSA contains a large-scale hex map, introductory information, geographical notes, and detailed encounters keyed to the map. " 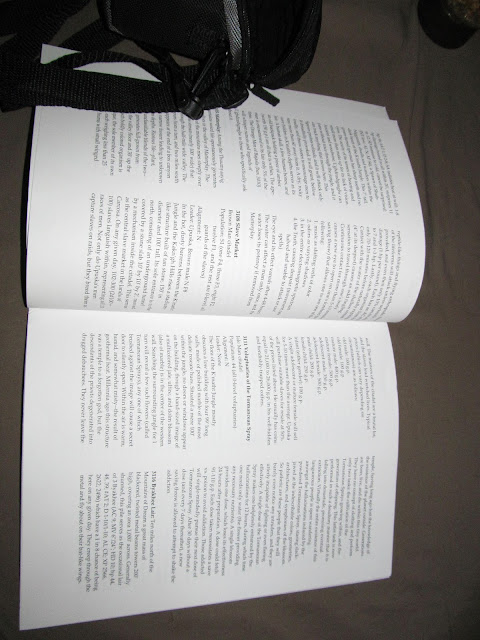 The module is on its side so my players don't cheat but you can get an idea of the layout.

The layout is clear & clean ready to go straight out of the box. The hex encounters are straight up well laid out & the descriptions are evocative without going beyond the top. This a module for any level PC but I'd clock it in at level four or five in my estimation. Encounters are lethal but not stupidly so unless the PC's blunder into certain keyed encounters. There are several colored people's cities & settlements while the technological levels are about 9th century Europe to the upper end of the Greys.
This module is made to be a bridge gap between the science fantastic setting of Carcosa & Advance Dungeons & Dragons first edition. The fact is that this module presents the setting in more at the table top adventure hex crawl. The maps read something more like a sustainable adventure campaign then the lethal brew that the original setting book was. The monsters are still the usual Carcosa fare of Illithids, aliens, mutants, dinosaurs,&  icky/slimy/oozy/wormy/tentacle-rape horrors but there's more of a traditional Dungeons & Dragons vibe to Carcosa module six. 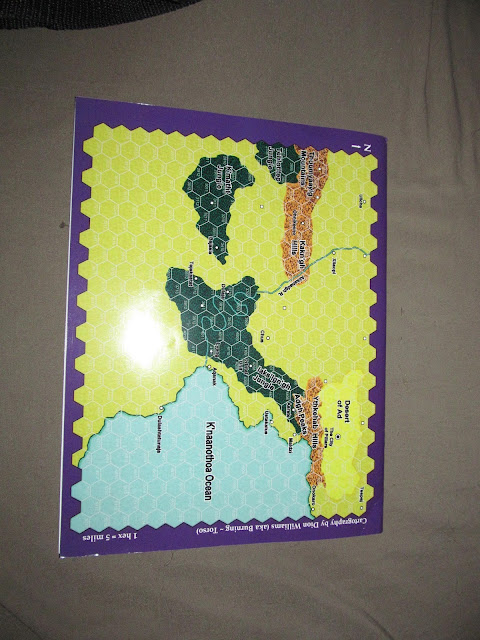 Barrens is a much more accessible module then some of the other Carcosa materials on the market & its self contained. A DM can run it straight out of the box & drop PC's into it. I've had several folks tell me that its not as balls to the walls gonzo as some of the Carcosa materials and personally this is a bit of a strength in my opinion. There are several ways of inexpensively adding in more gonzo material one of the best of which is  The Carcosan Grimoire. This is a community fan submitted Carcosa reference that has lots of sci fi & B movie goodness that can easily be added into Barrens of Carcosa without breaking the system. Can Barrens of Carcosa be run with original Dungeons & Dragons or B/X Dungeons & Dragons? Of course it can! Overall the module has a lot of plusses going for it if the dungeon master is used to running the type of adventure kit style that Barrens of Carcosa module six offers! 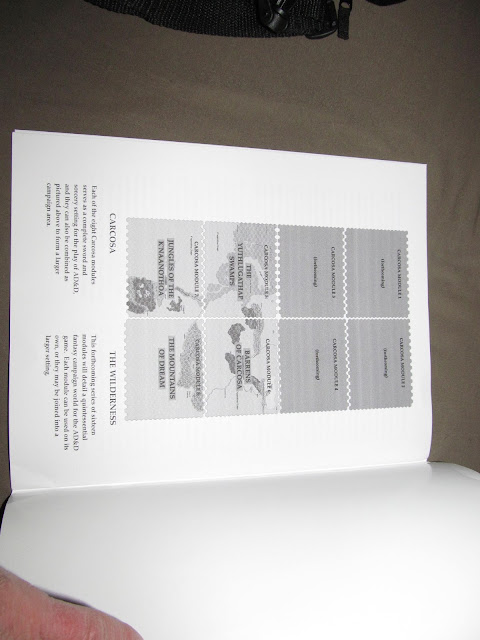 The kit approach is the exactly how these modules work taking each module as another piece of a greater campaign setting puzzle. Do you need LoFP's Carcosa book? Not at all but it can be added to the module to provide another setting layer. 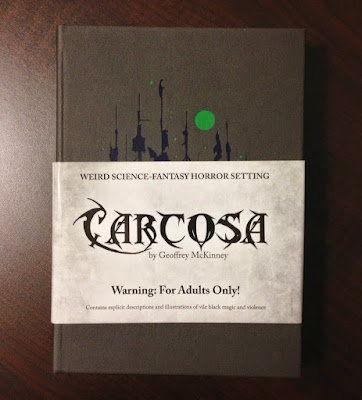 Carcosa is one of the great kitchen sink settings able to be used in a wide variety of ways & in some respects Barrens of Carcosa ties into the hex crawl encounter weirdness of the original. But I've had visions of dropping a party of Arthurian knights & warriors into module number six for sometime.  There are several ways of doing this within the context of the Arthurian literature & several nasty & dangerous witches capable of cursing a party right onto the accursed & lost planet. Elaine,  Morgan le Fay, & Morgawse are the heads of several covens of incredibly dangerous Chaos worship aspect. Each of these is more then capable of cursing a party of knights, warriors, & a mid level wizard off to the lost planet. 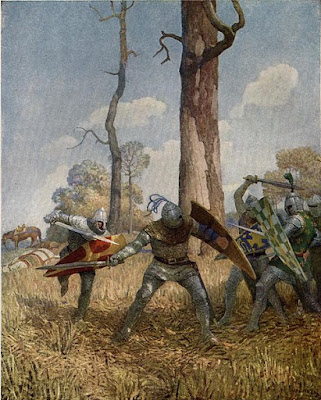 In point of fact there was some evidence of these witches having truck with Shub Niggurath in some of the more modern Lovcraftian literature. Dark Albion or Lion & Dragon  in fact could be used to fill in certain settlement deals within Barrens of Carcosa.
Posted by Needles at 11:07 PM