Deep in my heart, as in the hollow stone
And silence of some olden sepulcher,
Thy silver beauty lies, and shall not stir—
Forgotten, incorruptible, alone:
Though altars darken, and a wind be blown
From starless seas on beacon-fires that were—
Within thy tomb, with oils of balm and myrrh,
For ever burn the onyx lamps unknown.
And though the bleak Novembral gardens yield
Rose-dust and ivy-leaf, nor any flower
Be found through vermeil forest or wan field—
Still, still the asphodel and lotos lie
Around thy bed, and hour by silent hour,
Exhale immortal fragrance like a sigh. 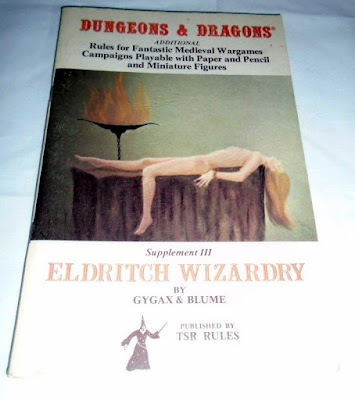 "Eldritch Wizardry introduced psionics and the druid character class.[1] The sixty page supplement added several other new concepts to the D&D game, including demons (and their lords Orcus and Demogorgon), psionics-using monsters (such as mind flayers), and artifacts (including the Rod of Seven Parts and the Axe of the Dwarvish Lords).[2] Any human of any alignment or any character class, except monks and druids, may have a chance to have psionic ability. Each of the character classes has its own list of psionic abilities which it may gain, and the book offers psionic attack and defense modes of various types.[3] The druid, first introduced in the Greyhawk supplement as a monster, is expanded in Eldritch Wizardry as a clerical sub-class, a priest of a neutral-type nature worship.[3] The book introduces seven distinct types of demons, as well as creatures that have psionic attack capabilities and/or astral or ethereal creatures, such as brain moles, thought eaters, su-monsters, and intellect devourers.[3] Eldritch Wizardry includes a modified combat system which takes into account a player's armor type, readiness of weapons, encumbrance, level of spell being used, and more.[3] The over twenty artifacts and relics included have tremendous powers unknown to the players, who must rely on rumor or trial and error" 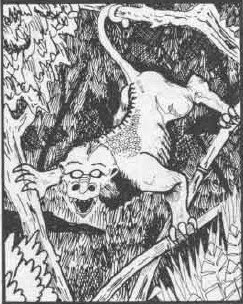 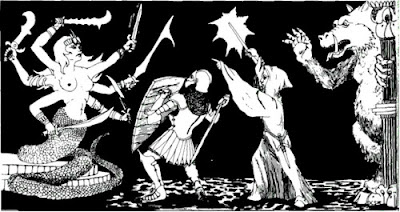 The artifacts section is one that we'd see more of later on in the Dungeon Master's Guide for AD&D first edition. These artifacts might be added into an off world haul or two sitting in the treasure rooms of a lone black wizard who rules nine star systems. The all powerful sorcerer Maal Dweb is exactly the type of black wizard who'd have an artifact or two laying around waiting to cause bloody havoc for a  dungeon master.
Both of the stories of Maal Dweb tie into the background weird of many of OD&D's classic artifacts.

CAS's Ubbo-Sathla (1933) gives a great case for why magic items are scattered across human history; the reach of the Old Ones & the Outer Gods is immense.
Because OSR games like Astonishing Swordsmen & Sorcerers of Hyperborea second edition takes place in the far future of Earth there is plenty of ways to connect up with CAS's world of Zothique.
Zothique's cycle blurs the line between science fantasy, horror, & the Dying Earth concept as fodder for old school games. Eldritch Wizardry plugs right into this vibe as a grab back of  'big boy' concepts for the OD&D game. This same sort of a grand standing at the table top fits well with the epic tone of AS&SH. There's  always been a sense of a greater whole due to some of the parts of Eldritch Wizardry. All of this plugs into the greater cycle of
Zothique.
Here the rich and dark world of Zothique  plugs right into the rich and weird history of OSR games. The DM is going to have to careful to not let the lack of game balance bother them. These are epic level quests that will cross the line from science fantasy & Weird Tales straight into the mythological areas for their games. The far future of CAS's
Zothique   is the perfect playground to introduce the PC's to some of the more fantastical elements of Eldritch Wizardry.

One tone is mute within the starry singing,
The unison fulfilled, complete before;
One chord within the music sounds no more,
And from the stir of flames forever winging
The pinions of our sister, motionless
In pits of indefinable duress,
Are fallen beyond all recovery
By exultation of the flying dance,
Or rhythms holding as with sleep or trance
The maze of stars that only death may free—
Flung through the void's expanse.

New shadows from the wings of Time unfolding
Across the depth and eminence of years,
Fall deeplier with the broadening gloom of fears.
Prophetic-eyed, with planet-hosts beholding
The night take form upon the face of suns,
We see (thus grief's vaticination runs—
Presageful sorrow for our sister slain)
A night wherein all sorrow shall be past,
One with night's single mystery at last;
Nor vocal sun nor singing world remain
As Time's elegiast.