"Several dangerous & diabolical NPC's showed up in the Caverns of Tsathoggua & a chance encounter with an unexpected guest of diabolical intentions makes things very dicey for the PCs tonight. " 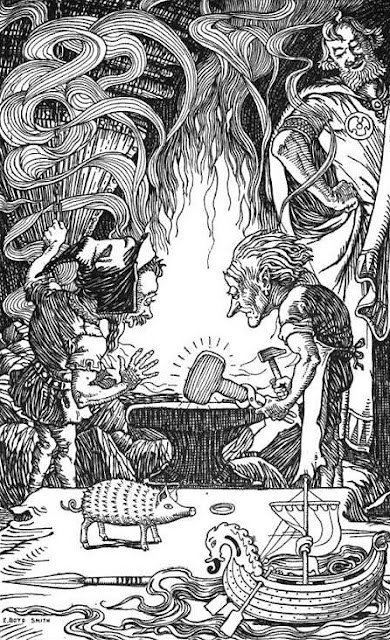 The third gift — an enormous hammer by Elmer Boyd Smith

In tonight's game the PC's managed to survive against several otherworldly NPC's including Captain Brand an NPC other dimensional pirate & agent of Chaos. The dimensional scoop of The Trinity of Awesome +1 managed to pick up the pirate whose been wandering the ether from another game campaign over a year ago.
The PC's managed to work over several minor monsters & defeat the minions but the Captain himself managed to escape. Several crystals & an encounter with some really nasty Norse mythological Dwarves convinced the players to finally get their act together & get the hell out of the dungeon. Needleham & Gingum remain one of the more dangerous locations within the Volcano Lands. Captain Brand's chaos mutant minion was attacked by a yellow orange slug monster who drained the poor bastard dry of their life force. There was little the party could do. 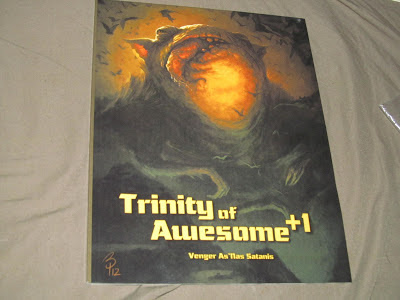 This was a heavily modified version of Venger Satanis's   Slaves of Tsathoggua with the encounter with oracle Despair actually being a Hyperborean demi goddess in tonight's game that almost got one of the PC's into her clutches. The player was a hair's breath away from being taken out of the game forever.
Finally the PC's managed to get away from one of the caves & sort of set themselves up for a quick trip over to  The Islands of Purple-Haunted Putrescence coming up in two weeks. Meanwhile the party are carrying several Norse mythological Dwarven treasures which they have no idea of the depths of crap they've gotten themselves into. 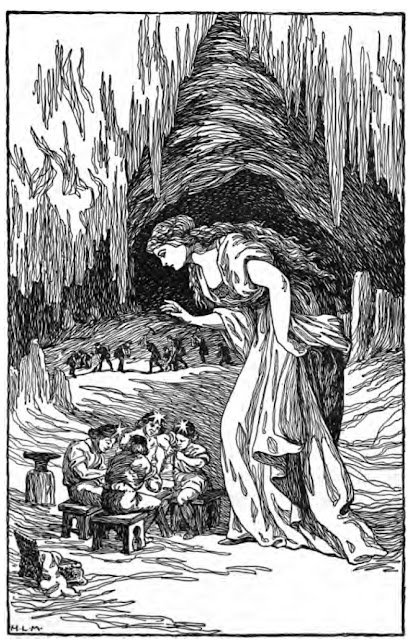 Freyja in the Cave of the Dwarfs by H. L. M


So part of the set up for tonight's adventure actually came from A.Merritt's Burn Witch Burn which appeared in Famous Fantastic Mysteries June 1942 issue. Several of the Dwarven treasures were inspired by the items that appeared in the background of this classic Merritt novella. 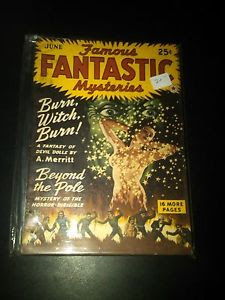 One of the other dimensional  gateways in tonight's game connected with a location that I've used before from Astonishing Swordsmen & Sorcerers of Hyperborea second edition namely  the Lug Wasteland. The Lug Wasteland might seem very familiar to my players & readers of this blog namely because its being featured in the New Kickstarter for AS&SH second edition's new adventure The Beasts of Kraggoth Manor by Tim Callahan. 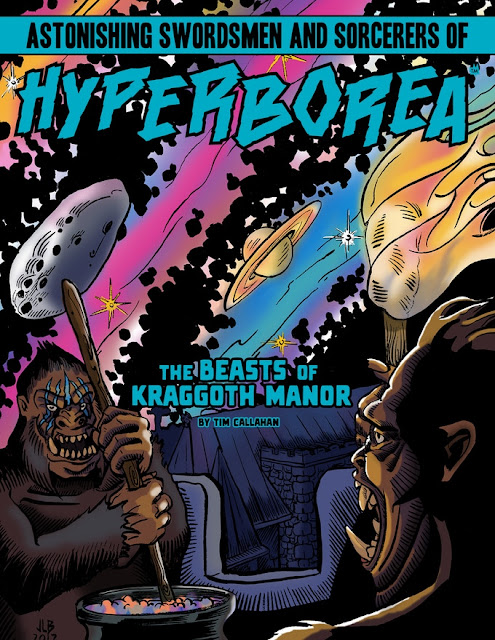 The Lug Wasteland will be coming up soon in my on going campaign because of its rich lot of Pre Green Death ruins & dungeons. The fact is that much of this region draws heavily upon Clark Ashton Smith's Tale of Satampra Zeiros, The (1931). So its a natural that this region will soon be appearing once again. The party managed to survive against several weird events & perhaps might live another day but it was a very narrow escape in several spots. Will they continue to survive and what is the strange Dwarven treasures connection to the events going on The Islands of Purple-Haunted Putrescence?!
Posted by Needles at 11:12 PM