"As adventurers, you may think you have seen everything: certainly your skills have brought you through unimaginable dangers. But now you suddenly find yourself in a place unlike any through which you have traveled: astounding, dangerous, and even amusing things confront you as you journey, both indoors and outdoors, through unique and wondrous realm of Dungeonland. "
Let's get the basics out of the way right off the bat & use the EX1 Dungeonland Wiki entry to get the very basics of the module out of the way; "Dungeonland (EX1) is an adventure module for the Dungeons & Dragons (D&D) roleplaying game, written by Gary Gygax for use with the First Edition Advanced Dungeons & Dragons (AD&D) rules. It is an adaptation of Lewis Carroll's Alice's Adventures in Wonderland, with the various characters from the book translated into AD&D terms" Personally I think its one of Gary Gygax's more inventive & interesting modules. 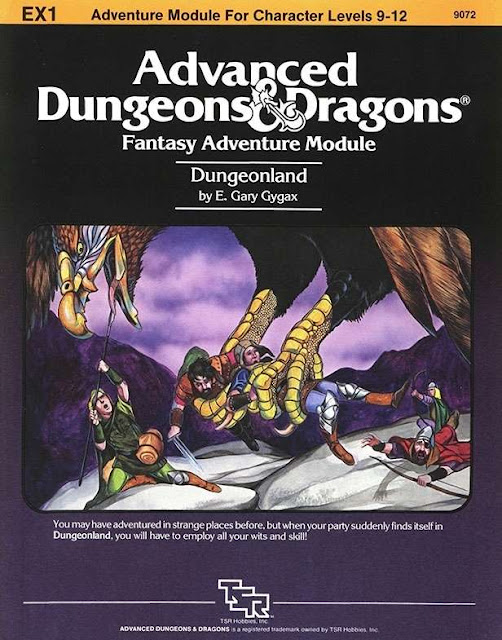 Hoping everyone had a brilliant Christmas holiday or whatever your celebrating. I've been doing a lot of thinking about demi planes or specifically those associated with EX1 & EX2 for Dungeons & Dragons. EX1 Dungeonland by Gary Gygax is intimately tied in with Castle Greyhawk. It has a reputation for both deadliness & a sense of whimsy. But this is one of those module series with a quietly underlying fairytale madness to both modules laced with lots of Gary Gygax's warped sense of humor.  But its the idea that both EX1 "Dungeonland" & EX2: "The Land Beyond the Magic Mirror" exist as both mini campaign & as demi planes tied to Castle Greyhawk. But where else are these module's tied to?! This question came up over the Christmas holiday speaking with friends. Reading through the EX1 Dungeonland product description on Drivethru rpg we get a solid history of the module's background in Gary Gygax's home game ( maybe it seems that there are some doubts about this but let's go with it. Read the comments section the module's Drivethrurpg entry.); "About Castle Greyhawk. Gary Gygax probably created Castle Greyhawk in late 1972, taking the idea of exploring dungeons beneath a castle from Dave Arneson's own Castle Blackmoor. Castle Greyhawk was thus perhaps the first actual D&D adventure location - which makes it all the more surprising that in the decade afterward, Gygax never produced a Castle Greyhawk supplement for TSR.

He offered hints of Castle Greyhawk's contents as early as Supplement I: Greyhawk (1975), when he mentioned the dungeon's "living room" and the fact that the dungeons contained a fountain of endless snakes. However, it wasn't until Gygax produced the World of Greyhawk Folio (1980) that he finally committed to detailing D&D's primordial dungeon, saying in The Dragon #35 (March 1980) that he was now hoping to produce "a huge map of the City of Greyhawk, modules based on the original Castle Greyhawk, and a series of offerings which depict the Elemental Planes of Greyhawk."
None of those ever come about. However, before he was forced to leave TSR, Gygax did manage to produce three adventures based on "demiplanes" - which were strange places that you could get to from Castle Greyhawk. EX1: "Dungeonland" (1983) and EX2: "The Land Beyond the Magic Mirror"(1983) detailed the first of them."

So the official Castle Greyhawk is dust & rubble in the worlds of TSR. But I'm not at all concerned about that instead I'm more interested in what happens to the demi plane of Dungeonland. We know that Mystara & Blackmoor have adventure elements of "Alice in Wonderland"  & Edgar Allen Poe in their background. The fact that both of these worlds might be connected to the demi plane of dreams is out there floating on the internet. Be damned if I can find it this morning but its out there. 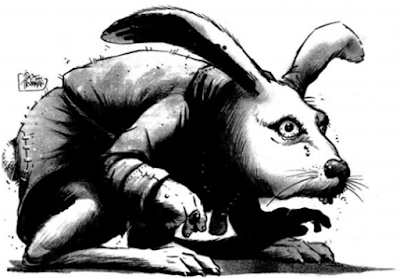 EX1 & EX2 are very high level adventures & have some quietly nasty surprises in store for the PC's & it makes sense. This demi plane is going to have to fight for existence among the myriad of planes. But Dungeonland isn't a place that ticks with the horrors of an 'in your face monster'. No this is the demi plane that feels like a fever dream happening all around your PC's. Its just as deadly but has the patience to take its time with the PC's & this is 'Alice in Wonderland' translated by the lens of Gary Gygax. There are some seriously dangerous NPC's to hand pick from these modules to get the motifs just so. Imagine PC's encountering these NPC's in a dark alley in their own home campaign & the confuse it would create. A slightly charred barrel lays at the back of the alley innocently. I've got some more twisted ideas about EX2 The Land Beyond The Magic Mirror.
Posted by Needles at 9:05 AM