Deem ye the veiling vision will abide—
The marvel, and the glamor, and the dream
Which lies in light upon the barren world ? . . .
The wings of Phoenix towering to the sun,
Nor opals, nor the morning foam, may hold
The hueful light that as from faery moons
Is mirrored on the sand; where many a time,
From fields that hem with golden asphodel
A river like a dragon coiled in light,
Rise to the noon the hovering minarets
And soaring walls of cities Ilion-like,
Till the dim winds are hung with palaces
Of orient madreperl.
For ever lost—
Like sunset on a land of old romance—
The splendor fails, and leaves the traveller
In bournless deserts flaunting to the day.
Mirage  (1922) by Clark Ashton Smith 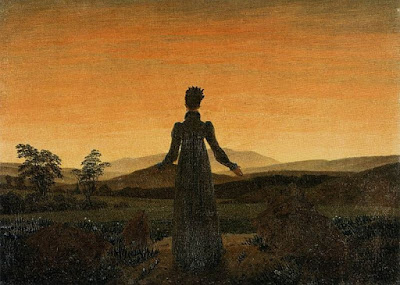 I know that my PC  wizard will soon die but at what hour?! Oh don't worry this isn't a 'Black Leaf no!' situation.
Over the weekend its been incredibly busy & that's a good thing but some part of my demented mind was always on Clark Ashton Smith's Zothique. Steve's Christmas game gave me a lot of pause & had me thinking about the Dying Earth genre & the OSR. Being on the other side of the screen for a change gave me a bit of pause & getting the chance to talk with other OSR guys. Getting the chance to play Castles & Crusades mixed with the Amazing Adventures! rpg was very cool. So much so that I had pre ordered the alternative cover bundle C&C from Troll Lords.


Slow down I'm still working my way through the books even though I've been running & playing the game. I've gotten a leg up on the system having run Amazing Adventures! rpg right out of the gate. But back to Zothique for a moment. I've always preferred CAS's  Zothique to the stuffy environs of Middle Earth or even Narnia. "Zothique...the idea of this last continent was suggested by the 'occult' traditions regarding Pushkara, which will allegedly become the home of the 7th root-race, the last race of mankind. However, I doubt if Theosophists would care for my conception, since the Zothiqueans as I have depicted them are a rather sinful and iniquitous lot, showing little sign of the spiritual evolution promised for humanity in its final cycles. Rosicrucianism seems to have some similar traditions regarding the lost continents."


Over the weekend I kept thinking about how Zothique's demon haunted lands, dream harried ruins & demented wizards  fit together with a Dungeons & Dragons style of campaign. Over the weekend I went over some of my notes for the Zothique D20 sourcebook. Yes, I realize that Astonishing Swordsmen & Sorcerers of Hyperborea fits the bill quite nicely for a far future world millions & millions of years in the future. But these days I use the OSR retroclone & its very polished high quality adventures as world source book & setting book. Zothique is uniquely Smithian in its decadence & weird style. Because its so unique there's an air of the dangerously supernatural & oddly occult  about it in certain rpg circles. I've got to laugh this B.S. off right out of hand. But the fictional fact is that this little piece of information has inspired me to create a rather nasty cult that seeks to return all life on Earth back to Ubbo-Sathla.
This isn't the first time that this cult has reared its head in various campaigns of mine & my friends. In fact it was suggested last week that this cult might have ties to some of the goings on in the events of Castle Amber (or Château d'Amberville). Who I'm I to argue?! Players & friends can give a dungeon master endless fodder if he or she listens. Could be a common thread connecting these various alternative epochs together? 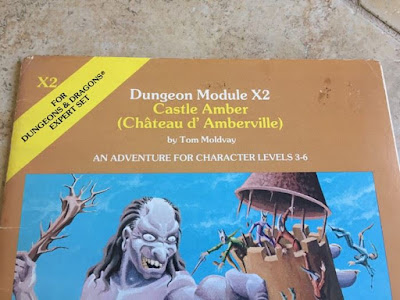 If Ubbo-Sathla plays a central role in Steve's game then there's going to a lot of Hell to pay? I've already seen some of his flare with using other members of the Mount Voormithadreth pantheon in direct opposition to the desires of the mad Outer God?! Our cleric was wielding a cross with an old school elder sign etched into the side of it. 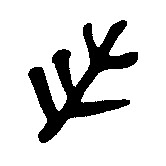 Steve name dropped several prominent NPC's from Tom Moldvay's X2 classic adventure during our session. So is he planning on dropping us into the Miocene, Castle Amber (or Château d'Amberville), or someplace even worse?! Because this is a mixed OSR &  Troll Lords game campaign there's lots of options on the table. Several NPC's have come into the mix from a variety of classic Dungeons & Dragons modules.
The wizard-noble Stephen Amber (Etienne d'Amberville) was rumored to be in Zothique while our party was there in the last adventure. The d'Amberville family was well known to the bandit tribe that we were staying with during the last game. And we pasted a noble house with the d'Amberville name on it. So what the Hell are the d'Ambervilles doing in the far future of Zothique? Knowing  the dungeon master's devotion to all things Clark Ashton Smith as I do our party may be for a serious ride. I've already got another PC standing by but I do think that Tom Moldvay's X2 Castle Amber (or Château d'Amberville) is going to be playing a very serious role in this mini campaign. It all wraps up by New Years!