The Free OSR Weird Fiction Resources of A.Merritt & Astonishing Swordsmen & Sorcerers of Hyperborea As Well As Your Old School Campaigns 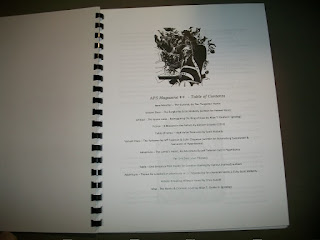 My schedule has been more then a bit erratic as of late with work to say the least, so I've been dividing up my time over the last couple of weeks here at Casa De Fabiaschi to concentrate on OSR sword & sorcery & pulp material that I already have. This turn of events has not going unnoticed in certain corners of the OSR namely those garage band marketing publishers and firms who are pumping out the usual fire hose of titles. So I've put a moratorium on reviews for the next six months because of work & familial concerns at home. Work has been going like gang busters with work. So  I've had to devote my time to getting articles,blog posts, & whatnot ready to go for readers of this blog. So where does that leave us with? Well. it left me to dip my wick into the deep end of weird fiction for Astonishing Swordsmen & Sorcerers of Hyperborea in the stacks of my gaming collection. I was specifically looking at AFS magazine issue #4, which if you're lucky enough to have a copy is one of their best. The contents speak for themselves and reads like a whose who of OSR gaming. But there's a specific adventure I'm going to be talking about tonight.


Fiction – A Blizzard in the Sahara by Aleister Crowley (1911)


Adventure – The Lamia’s Heart, An Adventure By Jeff Talanian (set in Hyperborea

AFS magazine jacked up the idea of OSR fanzine & took it in a different direction. The thing about the OSR material  was the quality of the articles. The magazine covers every retroclone from Swords & Wizardry, AS&SH, & even Holmes Basic. Do yourselves a favor and pick up copies the next time the magazine is published.

Theme for a Jackal  by Scott Moberly really got me thinking about taking AS&SH's Hyperborea in a different direction & showed me a really well done Weird Tales style of campaign kit. The whole issue is outstanding really and acts as a sort of AS&SH preview of coming attractions for AS&SH second edition. But once again I digress. The adventure has a sort of Clark Aston Smith feel mixed with something I couldn't quite put my finger on. Then it hit me early this afternoon, it reminds me of A.Merritt's science fantasy/sword & sorcery pieces of fiction. His life is as interesting as the fiction he wrote & he remains one of my all time favorite writers bare few. His writing have a timeless and almost dreamlike quality that reflects many of the ideas that seem to present themselves in  the Theme For A Jackel adventure and earlier Moberly AS&SH adventures. 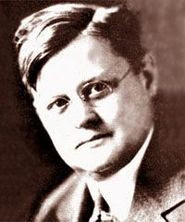 If H.P Lovecraft is the father of cosmic horror then A. Merritt is the father of his own pulp style & sure has hell doesn't get his due today. "Merritt's writings were heavily influenced by H. Rider Haggard,[6] Robert W. Chambers,[7] Helena Blavatsky[8] and Gertrude Barrows Bennett (writing as Francis Stevens),[9] with Merritt having "emulated Bennett's earlier style and themes."" Umm. no I think Merritt doesn't emulate but improves upon Bennett's style of writing & makes it his own. 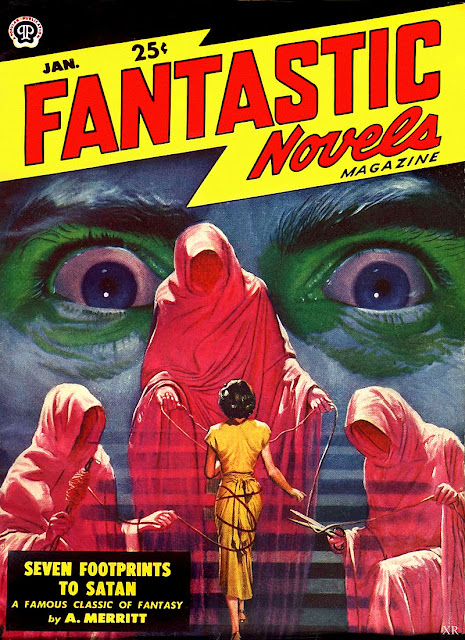 "Merritt's stories typically revolve around conventional pulp magazine themes: lost civilizations, hideous monsters, etc. His heroes are gallant Irishmen or Scandinavians, his villains treacherous Germans or Russians and his heroines often virginal, mysterious and scantily clad." Once again more pulp hand waving dismissive B.S. by Wikipedia. What really set's A.Merritt's work apart is his worlds, settings, originality, & pulpy sensibilities. Many of his novels & stories are now within the public domain. So let's get you some decent public domain downloads
Posted by Needles at 10:16 PM