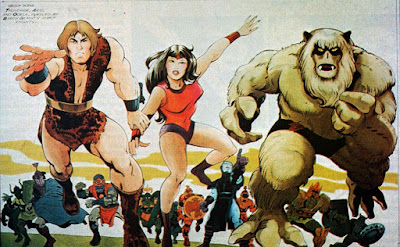 The concept artwork of Jack 'King of Comics' Kirby for Thundarr

So last night after getting done shovel a mountain of snow I settled down to read through some C.L. Moore's North Westsmith stories & began to think about what the hell was happening on Old Earth. Most of Old Earth's population had settled out on Old Venus & Mars but there were other inter system colonies. These were implied by other writers including Leigh Brackett, her husband Henry Kuttner, & Clark Ashton Smith. I haven't mentioned Edgar Rice Burroughs because he started part of this sword & planet business with a Princess of Mars.
Now what does any of this have to do with that classic Saturday morning cartoon Thundarr The Barbarian? Quite a bit actually along with the OSR.
Way back in October I did a series of Thundarr The Barbarian related blog posts for The  Adventurer, Conqueror, King, Rpg system.

Mars is crammed with adventurers, outlaws, refugee's, etc. from across the solar system. North Westsmith is always running supplies, contraband, etc. along with his Venusian partner looking for the next job but they're always in high demand. Basically Earth has suffered cosmic destruction because something went very wrong back on planet side. Mankind was moved out into the solar system.
"It was a motley crowd...  hard-faced Earthmen in space-sailors' leather, sleek Venusians with their sidelong, dangerous eyes, Martian drylanders muttering the blasphemous gutterals of their language, a sprinkling of outlanders and half-brutes from the wide-flung borders of civilization."
C.L.Moore - Dust of Gods

So it would seem that at first that mankind has spread out among the stars or was he forced out into the solar system during the golden age of exploration when the time barriers were broken. The world of Thundarr isn't our world, but could have the great nations of the Earth have broken through the dimensional barriers into another parallel Earth. They let in energies from other dimensions.

But where would such energies come from? Well looking at Apes Victorious I think I sort of know. Time moves at different rates & in the year 2573, the the American National Space Administration - launched a space vessel from Cape Kennedy on January 14 1972. They were well on their way to a practical FTL drive system using a time dilation principal. We can see this in the opening sequence of Planet of The Apes.

So what happened to the Earth during the year Nineteen Ninety Four to cause things to go awry? During the run up to the time of cosmic destruction other stable gateways were opened. These gateways lead to other Earth like worlds & teams recovered other relics & artifacts from other branches of time as well as space. Mankind made incredible strides in space technologies, genetic engineering, etc.  but then mankind turned on itself from within as factions of cults, risen species, etc. took out the Earth from under mankind's feet. Mankind had been adapted for life on other worlds or humanoid species captured from other versions of Mars, Venus, Mercury etc. 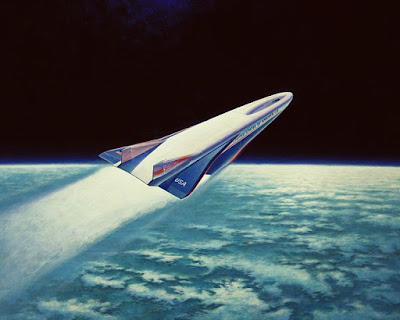 Another world might have had  the rise of genetic supermen, the retro technology of the Icarus looks very similar to the sleeper/cryo units of the Botany Bay. Did this world suffer the effects of the rise of the supermen as a result of genetic engineering adapting the human species to interstellar travel? The scientists of 'The Mindok The Mind Menace' also were woken from a cyro sleep similar to both the USS Botany Bay & the sleep pods from 2001 A Space Odyssey. 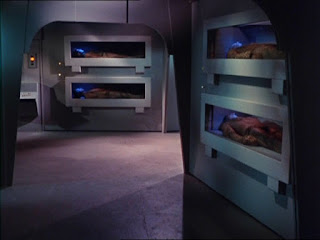 What about the time/space gate technology of Thundarr The Barbarian Episode The Portal Into Time? The Moon Dial relic was a piece of recovered Great Race of Yith time travel technology that led to an alternative version of the late Eighties Earth. This leads to time period domain level play for the Adventurer, Conqueror, King rpg system  for PC's. But if we're getting into the FTL branch of other dimensional gate technology then not only does The Forbidden Zone of Planet of the Apes begin to make sense. But then the recovered alien technology of the Time Tunnel  suddenly comes into focus after the recovered 'Krell' technology in the form of the Robbie the Robot from the Invisible Boy film of 1957. The Invisible Boy film has a back story or subplot  of Robbie being brought back to Fifty Seven. "According to a subtle back story in The Invisible Boy, the robot is the same character as that in Forbidden Planet, which is set in the 23rd century; Robby is brought back to the film's mid-20th century era by time travel."  The leaps of the A.I. technology in the film are direct results of recovered alien technologies. 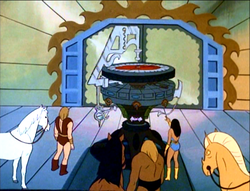 All of this leads back to The Sword of Rhiannon from 1942 by Leigh Brackett  which has mind transfer time travel as a central part of its plot set on Mars. "The protagonist is Matthew Carse, a 35-year-old former archaeologist-turned-thief in the Martian city of Jekkara. He is approached by Penkwar, who attempt to coerce Carse into helping him sell a relic stolen from a Martian tomb, the Sword of Rhiannon. Rhiannon was a legendary figure from the ancient Martian race of the Quiru who made the Promethean decision to share Quiru science with another race of Martians, the Dhuvians. Like Prometheus, his actions did not go unpunished: he was sealed in a tomb and became known to history as "The Cursed One". The Quiru left Mars to the Dhuvians and other hybrid races soon afterward." This is also central recovered Great Race of Yith techniques that we see again again and again in her solar system fiction. There's also the C.L Moore Northwest Smith story elements of powerful disembodied alien races & Lovecraftian god like races sprinkled throughout her series of novellas. 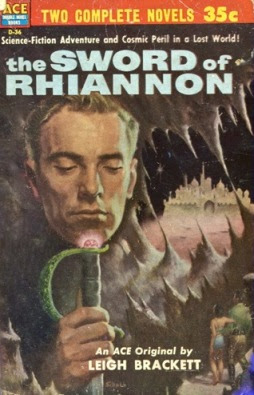 This leads back to the fact that In Planet of The Apes we're seeing the beginnings of hyperspace/dimensional gate subspace technologies being used. This is something that the 'Krell/Great Race' often used to move their ships, travelers, etc from one point to another. The use of subspace gateway technology won't be realized until well into the Federation era. Surely, Northwest Smith couldn't exist in such a time period as Goblinoid Games Star Ships & Spacemen's second Edition age? Actually he could, star ships of the Star Trek style cost billions of credits and let's not even think about that whole 'we don't use money' crap here.
Northwest Smith & others of his ilk operate under the radar as many other space sailors hauling cargoes & contraband that the human colonies need to barely survive. The star ships battle horrors from beyond the human pale out in the deep depths of space beyond Yuggoth. 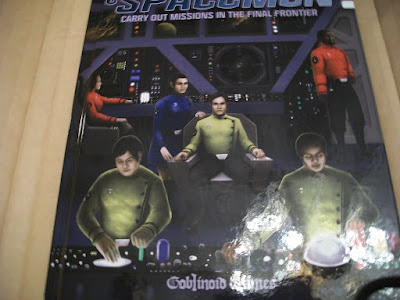 Earth is a mutant hell hole controlled by aliens, mutants, scum, Lovecraftian gods, & apes control a good portion of the wastelands of what's left of Earth's North American West Coast, parts of Canada, Alaska, & other edges of the map. So there's your Realms of Crawling Chaos Labryth Lord, Mutant Future cross wasteland sewn up for Apes Victorious. Because in Apes Victorious there are conversion notes for compatible games including: Labyrinth Lord, Mutant Future, Starships & Spacemen. 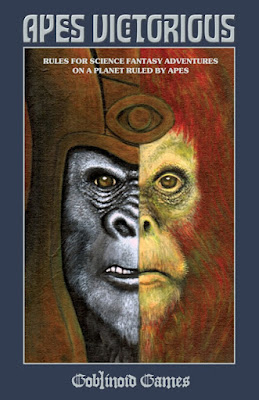 But what does this have to do with the 'Old Mars' &  Clark Aston Smith solar system? Everything actually, the back of the holy Therns has been broken & while the human colonies cling to dear life the rise of Black Gate cultists out in the wastelands thrive. The Martian equivalent of wizards of Earth, these black hearted fools dally with ancient Martian demonic horrors and worse. They have become so bad in some areas that alien and human mercenary forces hunt, battle, & exterminate them wherever & whenever they can. We'll get into more detail on these groups tomorrow. 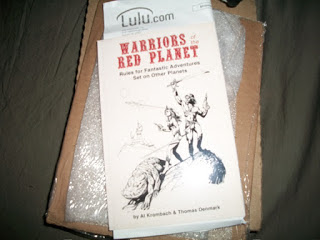 When it comes to domain level play Warriors of the Red Planet is designed to work with Adventurer, Conqueror, King enabling a dungeon master to plug and play that system into larger planetary military style games creating factional play in the wastelands of a pulpy 'Old Mars' or Venus. This also brings in another top drawer OSR supplement in the form of Dark Albion's Cults of Chaos that can be used to represent different faces of the Black Gate faction from fertility cults to military brotherhoods. Cults of Chaos is dark, evil, and ready to be used right out of the box. 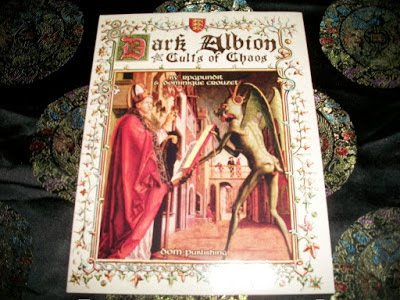 So how does this all fit in with Astonishing Sorcerers & Swordsmen of Hyperborea? 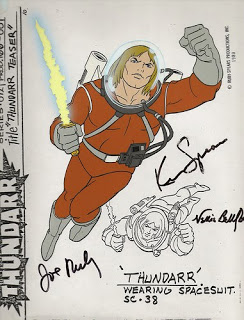 Hyperborea has always been that last refuge for the peoples of Old Earth out near Saturn & the eldritch horrors that dwell near the outer edges of where the Boreas Winds blow. A hairs breath away from the horrors that were wrought upon the Earth of myth & legend under the Broken Moon!


“The skies are haunted by that which it were madness to know; and strange abominations pass evermore between earth and moon and athwart the galaxies. Unnamable things have come to us in alien horror and will come again.”
― Clark Ashton Smith

This post is not an attempt to violate the copyrights or trademarks of any of the films nor properties named in this post. All ideas are for a private table top rpg campaign. None of the ideas or opinions expressed in this post are meant to violate the trademarks nor copy rights of any of the table top rpgs discussed nor are they in away responsible for the thoughts or opinions of the author. The writing, ideas, and opinions are copyrighted and trade marked to the author and Dark Corner productions. This post is for entertainment & educational purposes only.
Posted by Needles at 10:10 PM