"In a rain-soaked graveyard, a small group of men stands round a coffin bound with heavy chains. 'We are here to mourn the passing of Jean de Cardeau, ' intones the village priest. 'Let us pray that his rest is eternal, and that he never returns.' As the pallbearers lift the coffin, something scrapes on the wood from inside. Quickly and without emotion, the attendants slide the casket into a crypt. Then they seal the door and flee. Behind them, unheard, a dull thudding begins, growing louder with the onset of twilight. There can be no peace for those who linger in the earthly realm after death. And there can be no sanctuary on the Night of the Walking Dead! Set in a zombie-infested swampland, Night of the Walking Dead is an ideal first-time Ravenloft adventure. Players must unravel the mystery behind a string of murders and disappearances in a village plagued by ambulant undead - and all is not as simple as it seems! The hour of fear is upon us. Are you ready to face the demiplane of dread?" 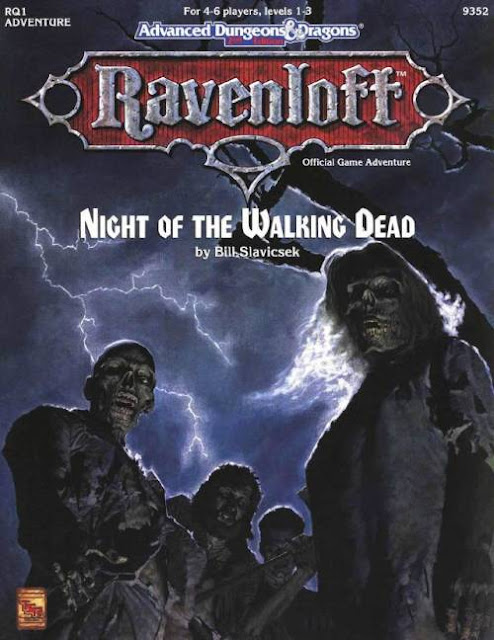 "RQ1: "Night of the Walking Dead" (1992), by Bill Slavicsek, is the fourth Ravenloft adventure. It was published in February 1992", that's the official history of this module for Ravenloft.But I've run this adventure too many times to count & I'll probably run it again. This isn't your average dungeon crawl but instead we're into the deep realm of investigation & role playing with NPCs in a Carribean setting. The Island of Terror: Souragne, including the village Marais d' Tarascon is an adventure location straight out of a 1930's or 40's Univesal classic horror movie. Yes I'm mentioning 1932's White Zombie starring Bela Lugosi produced by Edward Halperin and directed by Victor Halperin. We get introduced to the a new monster in the NPC of the zombie lord whose machinations the other undead must follow. These things used correctly can be very nasty for players & their PC's. 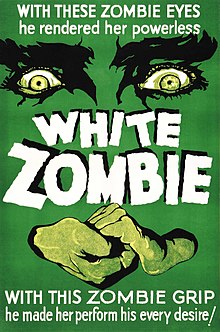 Now this is an adventure for PC levels one to three but make no mistake that I've had to bring in an NPC priest for healing more then a few times for even experienced groups of players. The reason is the increase in the sheer number of undead. They continue to build & grow in monster numbers. PC's are going to have their backs against the wall in no time. The fact that this is only a thirty two page module speaks volumes about it. Adam Morris in his Amazon review of the module brings up several important points about RQ1: "Night of the Walking Dead" (1992); "Certain elements seem glossed over, and other suggestions are impossible to carry out. A chase scene is called for, but based on the map, it seems hard for a chase scene to ensue--there is much space between houses and one does not get the sense that in this small town anything resembling an alley or a wrong turn could actually exist."
Don't worry about any of this & simply run RQ1: "Night of the Walking Dead" (1992) as is straight from the can. Part of the avantage of the module is the fact that it can be played over one to three sessions. This is a really nicely done Ravenloft  introduction module with several up tick ways of handling some of the stress of dungeon mastering. You've got hordes of undead, you've got an open adventure plot with real PC consequences, & an adventure plot connection with a full resolution for a change.

And this brings up the Advanced Dungeons & Dragons 2nd Edition  Ravenloft metaplot of the Grand Conjunction & here I'm gonna reference the official RQ1: "Night of the Walking Dead" (1992) Drivethrurpg entry; "RA3: "Touch of Death" had introduced the idea of "Hyskosa's Six Signs", a fragmentary prophecy that foretold an apocalypse based on six events — one each of which had appeared in RA1: "Feast of Goblyns" (1990), RA2: "Ship of Horror" (1991), and RA3: "Touch of Death" (1991). "Night of the Walking Dead" adds a fifth verse to the prophecy (leaving just one unknown) and as usual ties one of the verses into the happenings of the adventure, revealing a zombie-filled eclipse:
The light of the sky shining over the deadshall gutter and fail, turning all to red.

These verses were elements of the six-part Grand Conjunction metaplot. Unfortunately, the fact that the Hyskosa prophecy had only appeared in the story's third adventure resulted in one big problem: the order that the adventures were published in didn't match the levels that they were intended for! Some fans suggest that different characters could play in different parts of the Grand Conjunction metaplot. However the more popular response is to reorder the six adventures by level. This has almost no effect on the overall arc since the first four parts of it are very loosely connected:
Now taken as a whole this looks like a giant sink hole of a horror plot for Ravenloft & simply a second edition AD&D TSR trick to get more money out of their players & dungeon masters. Not so at all. This is in fact a fully thought out adventure & level path for Ravenloft. Think about this, your player's PC's start out in RQ1: "Night of the Walking Dead" (1992)  then slowly adventure through 'RA3 Touch of Death' should they survive then they'll eventually get to twelveth level in many years. 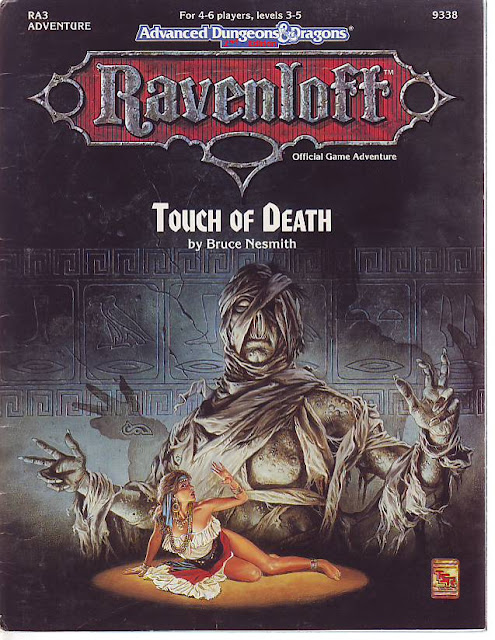 The Advanced Dungeons & Dragons 2nd Edition  Ravenloft metaplot of the Grand Conjunction if used & reworked for the Ravenloft dungeon master's campaign can be a very rewarding event. But its the time & commitment on the player's part that's gonna make this work.
That being said "RQ1: "Night of the Walking Dead" (1992), by Bill Slavicsek is a module with some minor problems but a  solid addition to any Ravenloft fanatic's libarary.
Posted by Needles at 5:47 PM