So I'm speaking with friends last night about the last travesty of my using Legion of Gold as a funnel for a post apocalyptic Dungeon Crawling Classics game using the Crawling Under A Broken Moon rules. So the big complaint that I heard from my friends and players was that they couldn't afford Legion of Gold but loved the ideas of such a funnel. Too bad there isn't a free Gamma World module that could be used in much the same way? Well actually there is! In fact this module has a straight up dangerous high level and very lethal faction from Gamma World introduced way back in an early issue of Dragon magazine. It really doesn't matter which one because everything you need is actually in GW5 and its free. It happens to be for second edition Gamma World and that's really not going to be a problem.
GRAB IT RIGHT HERE 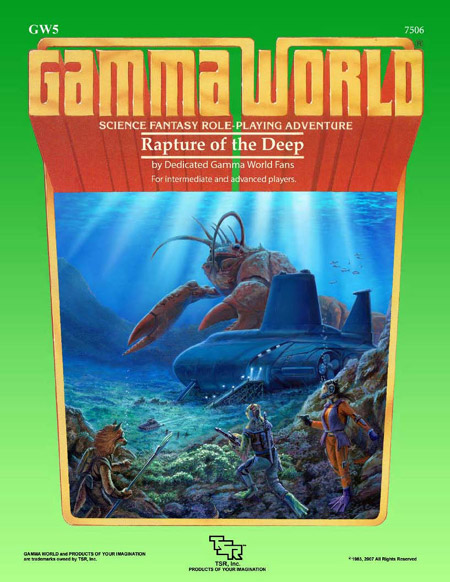 So what exactly is GW Five Rapture of The Deep and why is it free?
It's a fan made module created to fill the gap in the TSR GW sequence, GW5. For intermediate to advanced players. Here's where the funnel takes place your PC's are some of the victims caught within the attacks happening along the former Florida panhandle.

"A terrible menace from the sea is threatening villages all along the coast. Whole shoreline communities have been disappearing without a trace.
After going through the usual DCC funnel style experience using a bunch of aquatic mutants and their gear, the PC's should have a small side adventure in the ruins of Florida.  Then this bit get's them straight into the action;
"The remaining area inhabitants have banded together and sent for a group of experienced heroes to help. They want to know what could be causing these horrible events, and more importantly, what can be done to put a stop to them. Is it some new terrifying monster from the depths? Or is there something more sinister at work? "
The biggest hurltle the dungeon master and players might have is the use of the underwater rules for DCC but they are out there in the wilds of the internet if you do a bit of research. Here's some that might be of use.
"The adventurers will travel deep beneath the waves to discover the answer. Can they survive the strange and dangerous ocean depths of Gamma World? Can they solve the mystery before it's too late? " This adventure is an extended campaign for underwater post apocalyptic adventure and there is a ton to encounter and deal with in Rapture of the Deep. This is an underwater sandbox that I've seen several side adventures worked into the background of play over the years and even with DCC it shouldn't be any different.
So that's really the set up for the post apocalyptic DM and his players. The adventure contains a whole plethora of Gamma World underwater madness including: " game master notes, background information, maps, rules for underwater adventuring, new equipment, and over 30 new aquatic creatures."

Rereading through Rapture of the Deep it brought home the opportunities for expansion of several set pieces I've seen used in Gamma World, Mutant Future and other PA games that other DM have used one of which has been floating space ship launch sites controlled by A.I.'s and machine intelligence gods. Many of these ideas were perfect for off of the coast or Florida and Gulf of Mexico, this fits in perfectly with the Merica of Crawling Under A Broken Moon. There are some free resources to that end right over HERE 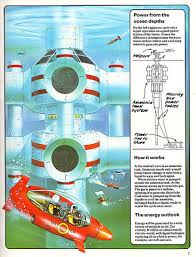 Rapture of the Deep features an extensive style of underwater campaigning and this adventure could take months for a group of experienced players to go through. Have several PC's ready and make extensive use of this time to establish an underwater domain or base for PC's because by the time they're done your going to have very high level adventurers at least three or forth level in DCC. If they survive the experience. For myself I used the pattern of the movie Leviathan from 1988 as the pattern for the domain that the players had. A roving under sea mining and scavenging  platform that the PC's managed to free from its A.I. god became they're domain. This same formula could easily work for a DCC game.


GW 5 has its own set of challenges but also an extensive set of rewards and ideas for a range of extended post apocalyptic play. The module remains a favorite of mine. For issues of Crawling Under A Broken Moon that would help I suggest issue #11, 10, 7, UX01: High Caliber Hijinks, and more. Hell just buy the whole damn run and you won't be sorry. More Gamma World and DCC goodness coming up. 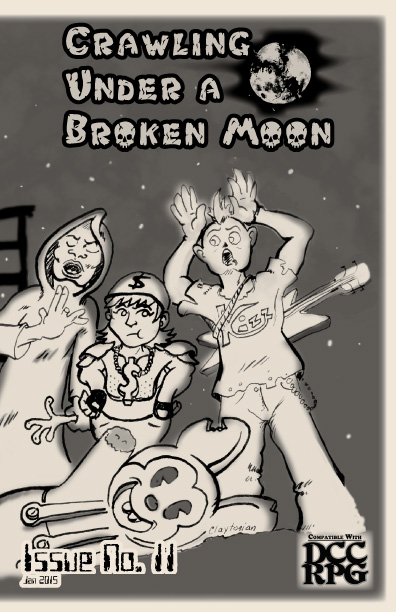