When it comes to the holidays they often leave little time for me to pick up on the pieces of my back gaming hobby. The back game is the second game that a dungeon master is always playing. The research, writing, prepping, & learning that goes into making a successful campaign. Today I zipping around Twitter as I sometimes do.
I came across my friend  Jeffrey Talanian 's Tweet;
"The back cover of AS&SH, featuring art by Charles Lang. In his foreword, Stuart Marshall wrote, "This is no world of epic, heroic fantasy. Weird fiction was always on a smaller and more personal scale. In heroic fantasy, you’re trying to save the world. " "...In weird fiction, you’re mostly just trying to prize the gem out of the statue of the spider-god’s eye socket. Success is survival with increased wealth." 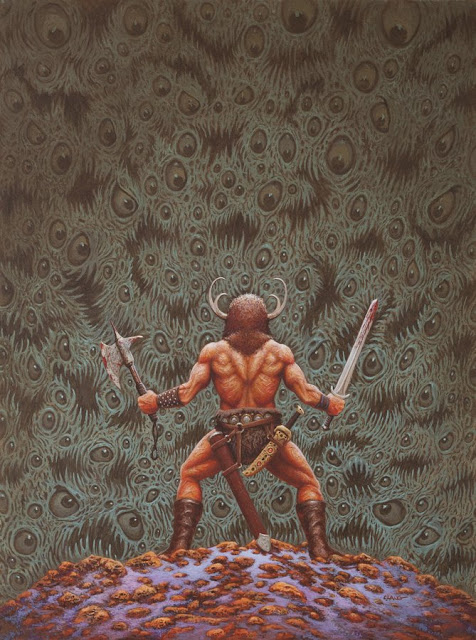 The Astonishing Swordsmen & Scorcerers of Hyperborea rpg traces its own roots from not only the weird fiction of the Thirties but also the Sixties & Seventies Swords & Sorcery literatures. According to the wiki entry on Swords & Sorcery; "In his introduction to the reference Literary Swordsmen and Sorcerers by L. Sprague de Camp,[9] Lin Carter notes that the heritage of Sword and Sorcery is illustrious, and can be traced back to mythology, including the labors of Hercules, as well as to classical epics such as Homer's Odyssey, the Norse sagas, and Arthurian legend.

It also has been influenced by historical fiction, for instance that of Sir Walter Scott which was influenced by Scottish folklore and ballads.[10] However, very few of Scott's stories contain fantastic elements; in most, the appearance of such is explained away.[11] However, its themes of adventure in a strange society influenced the adventures set in foreign lands by H. Rider Haggard and Edgar Rice Burroughs.[12] Haggard's works included many fantastic elements"
This brings me to the fact that Sword & Sorcery is paradoxical in its nature because Homer's Odyssey,the Arthurian legends & even the Norse sagas are about kingdom or empire  spanning destruction & the saving of that setting. Are some of these tales are about world spanning threatens & that brings us to the fact that out of the Sixties & Sevenities came Elric of Melniboné created by Michael Moorcock. The first Elric story The Dreaming City appeared in  1961. The character of Elric shattered the conventions of Sword & Sorcery. But first & formost he is a mercenary outcast dependant upon his sorceries & the the demon sword Stormbringer. 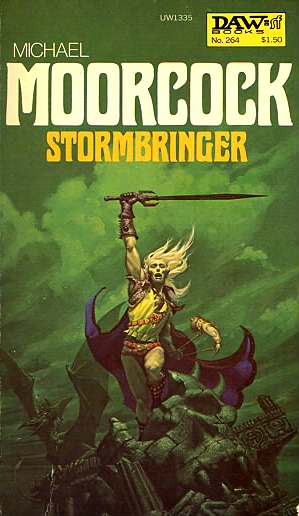 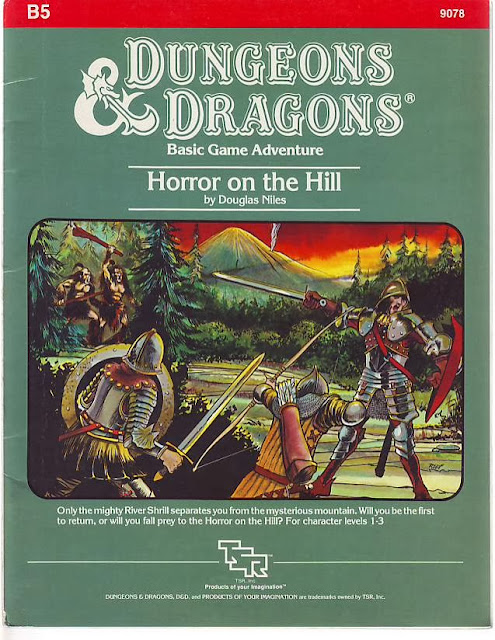 With a combination of Douglas Niles B5 Horror on the Hill & Gary Gygax B2 Keep on the Borderlands used with AS&SH then we get 'Epic Weird Fantasy' in the D&D tradition. A small scale adventure series with a tapestry of greater conflict with a campaign setting. Robert E.Howard's Beyond The Black gives the very principals of using armies or greater threats to a campaign with the story's plot;"The foreword to the story tells of Conan's journey to Punt with Muriela, a scam perpetrated against the worshippers of an ivory goddess, and then into Zembabwei, where he joins a trading caravan on their way towards Shem. Around 40 now, Conan visits Cimmeria and finds his old friends are now fathers. Bored, Conan sets off for the Bossonian Marches and becomes a scout at Fort Tuscelan on the Black River, at the western border of the newly conquered Aquilonian province of Conajohara.
A young settler named Balthus encounters Conan in the forest slaying a marsh devil. Accompanying the young man back to the Fort, Conan finds the corpse of a merchant left by a Pictish wizard named Zogar Sag and slain by a swamp demon. The fort's commander, Valannus, desperately asks Conan to slay Zogar Sag before he raises the Picts against the whole borderlands, especially since their fort is vastly undermanned after the Aquilonian king, Numedides, has foolishly decided to withdraw most of his army. Taking a hand-picked team of scouts and Balthus, Conan sets off stealthily in his canoe."
Its not always about simple survival & treasure sometimes its about setting up the rest of the campaign from the ground up. Basic tactics, play follow through, & even allowing the player's PC's to shine can lead into a solid foundation of Sword & Sorcery play.
Posted by Needles at 8:14 PM