This one is a hell of a tale! A classic of the Sword and Planet genre with a real sword thrust into adventure by one of the first ladies of planetary romance.  The material is far more cynical and hard boiled then other later Mars stories she did. It is still a classic and very well done. 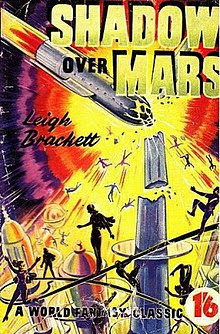 The Blurb:
How would Rick fulfill the prophecy that linked his name with the destiny of a dying world? He was a man without a planet, and he owed allegiance to nothing — except his lust for power!"

According to wik there were a couple of reprints and incarnations of this novel :


The novel was first published in the Fall 1944 issue of Startling Stories. Its first book publication came in 1951 with a paperback edition distributed by Sydney Pemberton but it is more widely known for its appearance as Ace Double F-123 with Robert Silverberg'sCollision Course. This edition was retitled The Nemesis from Terra

Plot With Spoilers  once again according to Wiki :

Like much of Brackett's work, the novel is set on Mars, where tension is building between rebellious Martians and humans in the thrall of the Company. At the beginning of the novel, the protagonist Rick Urquhart is attempting to evade the Company when he encounters a Martian, who makes a prophecy that he will ultimately rule the planet. He is forced to kill her in self-defense but the company soon catch up with him and send him to back to labor in the mines.
However, he is able to escape and meets Martian-rights activist Mayo McCall. He is captured by the Martians and made to atone for his murder but after a failed rebellion, Rick becomes their greatest hope for success and the stakes are raised when Company operative Jaffa Storm kidnaps Mayo. To discover his fate and rescue Mayo, Rick sets out to the Martian North Pole, home of the mysterious "Thinkers".
Using 'Shadow Of Mars' For Your Old School
Campaigns

Shadow of Mars is an interesting departure from Brackett's later Martian tales. The Company is an almost 'East India Style' corporation exploiting Mars and its resources. The tale makes an interesting distorted mirror of what Barsoom was in its dying period and what it might become under the thrall of the Earth.
Though it doesn't fit well with Brackett's other Martian tales it none the less makes interesting fodder for a campaign set upon Mars during the heady days of the stories events. Adventurers could be playing right against the same backgrounds of the story and still manage to shine in their own way.
For my own post apocalyptic Mars 'The Company' and its remains have be deviled PC's a number of times. A constant thorn to be dealt with as the East India company was.
I think that this tale takes place in an alternative version of Brackett's solar system. This tale doesn't quite fit in with her other tales but it none the less could be set within another version of those worlds. Details of Leigh Brackett's Solar System Right
HERE
All in all I think that Shadow Over Mars is a decent jump off point for a campaign and an interesting read. Her later tales would establish the writer's voice far more but this is a decent place to star into Ms. Brackett's science fictional pulptastic universe.
Posted by Needles at 7:34 AM