Review and Commentary On "I, Frankenstein" For Your Post Apocalyptic Campaign 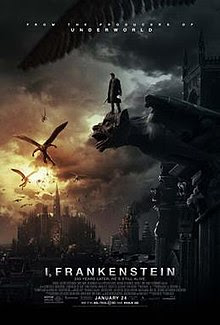 Last night, I got dragged out to the movies and dinner kicking as well as screaming to go see I Frankenstein.
This one is a rental folks. It was a good entertaining CGI train wreck of a movie.

Let's start out by saying that this movie has absolutely nothing to do with the Mary Shelly  book, beloved Universal  films, or any other pop cultural icon that resembles Frankenstein.  This film is based on a comic book!
Thanks and now we can proceed.
Here's the plot with giant spoilers ahead from Wiki !
In 1795, Dr. Victor Frankenstein (Aden Young) creates a monster (Aaron Eckhart), and then rejects it. In a fit of rage, the creature kills Frankenstein's wife, Elizabeth (Virginie Le Brun), and Victor chases it to the Arctic to get revenge, but succumbs to the weather. The being buries its creator and is then attacked by demons before being rescued by gargoyles Ophir and Keziah, who bring it before the gargoyle queen, Lenore (Miranda Otto), and their commander, Gideon (Jai Courtney). Lenore explains that they were created by the Archangel Michael to battle demons on Earth, and names the creature "Adam", inviting him to join them, but he declines and departs after being given gargoyle weapons that allow him to destroy demons.
Throughout the centuries, Adam fends off the demons that pursue him. During a modern-day confrontation at a nightclub, a policeman is killed. While Adam is summoned by the gargoyles once more, the demon Helek (Steve Mouzakis) reports that Adam is alive to his leader, demon-prince Naberius (Bill Nighy), who is disguised as billionaire businessman Charles Wessex, and his right-hand man, Dekar (Kevin Grevioux). Wessex has employed scientist Terra Wade (Yvonne Strahovski) to conduct experiments with reanimated corpses, and sends a group of demons led by his most formidable warrior, Zuriel, to attack the gargoyles' cathedral and capture Adam so he can unlock the secret to give life.
Before Lenore can punish Adam for the policeman's death, the cathedral is attacked, and Adam convinces Ophir to release him. In the ensuing battle, a number of gargoyles, including Ophir and Keziah, are slain, while Lenore is captured and brought to an abandoned theatre. Adam and Gideon head there, where Gideon exchanges Lenore for Frankenstein's diary with the secrets of the experiment. Adam follows Zuriel to the Wessex Institute, where he learns Wessex plans to have demons possess reanimated corpses that cannot be destroyed. He retrieves the diary and escapes, and later confronts Terra before they are attacked by Zuriel, whom Adam manages to kill.
Adam warns the remaining gargoyles of Wessex's plan, and Lenore sends Gideon to kill him and retrieve the diary. After a violent fight, Adam is forced to kill Gideon and then decides to burn Frankenstein's diary and destroy its secrets before the gargoyles come after him. Adam evades them, leading them to the Wessex Institute, where they join battle with Naberius's demons, killing Dekar early in the fight. While the battle progresses, Adam ventures into the Institute to rescue Terra, who had been kidnapped by Wessex, who takes the form of Naberius and activates the machine. As the gargoyles attempt to stop the reanimated demons, Adam battles Naberius and carves the symbol of the Gargoyle Order on him, banishing him to Hell alongside the other demons, and causing the entire building to collapse.
Recognizing Adam's bravery, Lenore rescues him and Terra and forgives Adam for Gideon's death. Adam retrieves his weapons and, after bidding farewell to Terra, departs to continue his immortal quest to rid the Earth of demons, embracing his role and his true name "Frankenstein"
Look not even the cast of Underworld could put this movie back together again. This film was an unholy amalgamation of  the themes of Underworld, Constantine, Abe Lincoln Vampire Hunter ( substitute Demons for Vampires) and a whole bunch of tropes from horror films. That's the lineage of this movie.
According to wiki :

Kevin Grevioux of Underworld sold the original screenplay to Lakeshore Entertainment in 2010.[3][4][5] It is based on his Darkstorm Studios graphic novel of the same name.
So basically this is a rental, many of the themes are things we've seen in films, comic books, and other film productions before.

Bottom Line this one is a rental! Enjoy it for a bit of mindless entertainment on a Saturday or Friday night.

Using "I Frankenstein" For Your Old School Post Apocalypse
Campaigns 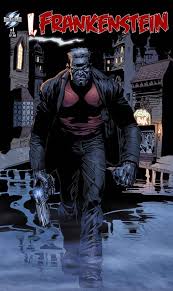 The truth is that this film would make a great cheestastic Old School Post Apocalypse Campaign! I'm not going to lie here. All though out the film I kept thinking that the PC's could be other experiments from Victor Frankenstein who have awakened within the wasteland to a world that has gone to Hell.

The demons, gargoyles, etc are all available in AD&D and Labyrinth Lord From Goblinoid Games. Hell, I kept seeing Mutant Future in every dark twisting set piece in this film. Gargoyles, Flesh Golems, etc. its all there.
I see the PC's waking up on the slab after hundreds of years and tracking down the Monster and heading into the wilderness of the wasteland. Heck if you didn't want to use 'I Frankenstein' ( personally I wouldn't). I'd use 'Jess James Meets Frankenstein's Daughter' and continue the work of Victor's latest descendant. Simply add in Orucs or some other demon lord's influence upon the plane!
Heck my fellow blogger Tim Snider did all of the hard work for the Mutant Future campaign right over

HERE  with his Prometheoids.
The campaign setting could serve as a bridge between a labyrinth Lord Gothic game and Mutant Future!
With a party of the mad bastards you can really lay into the powers of the post apocalyptic world!
Posted by Needles at 10:59 AM