"In the temple district of Arenjun, Zamora's notorious City of Thieves, stands a glittering tower said to house a fabulous jewel called the Heart of the Elephant. The city's thieves avoid the tower and the jewel, fearing its master, the sorcerer Yara, who is said to be 300 years old. The PCs, being brave or foolish (or both), have no such hesitations. They set out to steal the jewel from the wizard. Inside the tower, the PCs learn why the jewel is called the Heart of the Elephant and how it turns out to be their key to destroying Yara. The PCs should have little trouble getting directions to the Tower. At the same time, they hear rumors of Yara's dark powers, his incredible age, and how his power is drawn from the magical jewel. No unwanted visitor has ever returned from the tower." 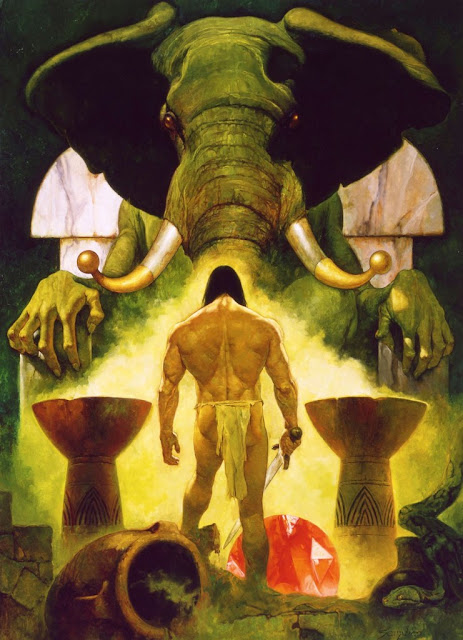 Venture in the footsteps of young Conan as he braves the terrors of the Tower of the Elephant in Arenjun, Zamora's City of Thieves!  Written by  Robert E.Hoaward is a classic Tower Of The Elephant, first appearing in in Weird Tales, March 1933. This is one of the most iconic of the original Howard Conan tales. It has a little bit of everything a dangerous adventure location, vile traps for would be thieves, barbarian wisdom, & much more. Castalia house has an excellent breakdown of the Robert Howard classic here.  Jason Vey threw down the gauntlet today saying that he'd be using his Free Grey Elf Original Dungeons & Dragon  Conan  rules to run the Free D20 HS4 The Lost Caverns of Acheron adventure. The truth of the matter is that I've already got a Sword & Sorcery  Castles & Crusades/Siege engine game already going. 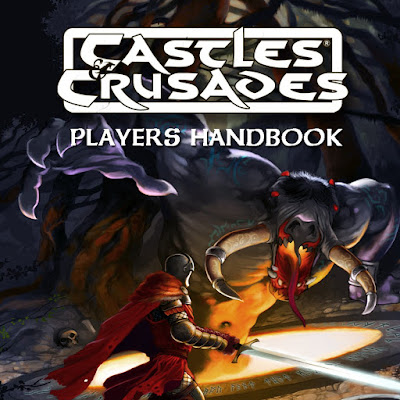 This brings me to what I'd do with the Free Tower of the Elephant 20 adventure from the incredibly useful https://hyboria.xoth.net site, Tower of the Elephant:  adapted and edited by Wesley Connally. Written by Thulsa.  Now Tower of the Elephant is great for a mid level party of adventurers & has everything I would possibly need to run it straight outta the gate. Except I wouldn't be using it on Conan's Hyboria. Instead I'd set Tower of the Elephant on Clark Ashton Smith's Zothique. There are several reasons for this:
Yag-Kosha is a transcosmic being & they exist on a multiplicity of planes at the same time. That means that there's already a version of the Tower of the Elephant even whist there's one during the  the Thurian Age;" Long before the dawn of man, and before even the Thurian Age began on Earth, a conflict raged on the far-distant world of Yag. The noble and peaceful people retreated into exile across the stars, coming at last to Earth. Here they hid in the deep jungles, living simple lives, not interfering with the evolution and history of mankind. However, as time went by, more and more of the people died, and at last only Yag-Kosha remained. "
Adapted by Marvel in  Conan the Barbarian I#4 (April, 1971)  this is one of Howard's seminal tales & a very deadly adventure location. Caution should be used when using this adventure & this is one that could easily be used with Dungeon Crawl Classics easily. For Amazing Adventures several of the artifacts, details about Yag-Kosha race, & more can easily be adapted to your campaigns as background material. 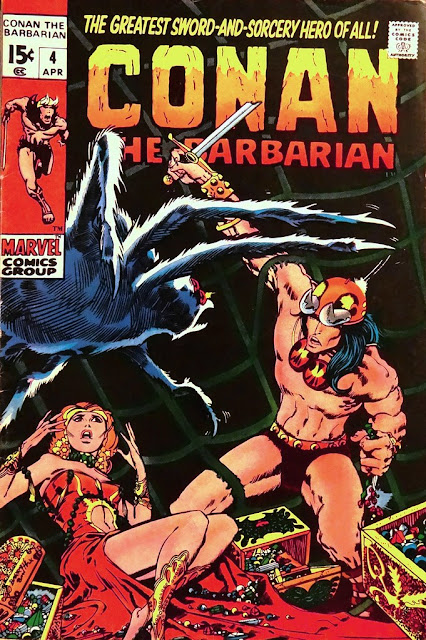 On Zothique the tower is shunned by most right thinking peoples & exists within an urban capital city. There are numerous rumors about Yara. the wizard but its a place of horror & time haunted weirdness. Within it a facet of Yag-Kosha still acts upon his eternal vengence on the wizard. PC's can enter the tower, help with the vengence, & take treasures but Heaven help them should they try to deal with Yag-Kosha himself. The write up on YAG-KOSHA on the Appendix To the Marvel Universe Handbook site has additional details. Yes there is a Tower of the  Elephant box set for the D20 Conan game but I don't have access to it at this time. So instead I've opted to take the PC's into a slightly different direction. This adventure could easily be adapted into Astonishing Swordsmen & Sorcerers of Hyperborea.
Posted by Needles at 12:03 PM