When I need a bit of inspiration for an OSR  campaign or retro gaming piece that I can insert into a game I turn to Foot Print magazine. The reason is simply that most of my players have dismissed this venerable retroclone/AD&D first edition periodical. That's fine with me. The fact is that besides  Fight On. This is the one that I turn to. Issue seven is one that I've found particularly useful over the years.  What's in it? 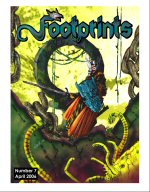 Footprints is one of those periodicals that has an interesting reputation among certain circles of OSR gamers & old schoolers. The material is top notch & the layout is well designed but its never gonna replace The Dragon or its later incarnation of the Dragon magazine. Footprints was never meant to, instead its been an attempt to fill a void left among old school & OSR'ers.

Footprints is one of those fan/professional zines that has lots of potential to be really customizable to your own gamer & campaign needs. The material has lots of really cool niches that you didn't know you needed as an Advanced Dungeons & Dragons first edition player or dungeon master. The lay out is easy on the eyes, the cartography is professional, & there's lots great stuff in these downloads.

From the Dragon's foot Blurb :
Here's a quick look at the contents:
Artisans (NPC class)New Spells Little Prayers (article/spells)Cat Of Nine Lives (monster)Boggarts! (article/monsters)Scion Of Cthulhu (monster)Spells for the Sophisticated Travelling WizardClerics Turning Undead (article)Random Encounters (article)Master Encumbrance Guide (article)
Over the last day or so I've been going over AS&SH as well as OSRIC while planning an adventure set. I've turned to a series of notes that I made a few years ago involving this particular issue of Footprints.
Using Issue Seven For your OSR Campaigns
Artisans (NPC class) - These folks are the forgotten NPC class in many fantasy, science fantasy, and sword & sorcery campaigns. Especially a game like AS&SH Artisians are essential to the success or downfall of a tribe of warriors or barbarians. These folks can also be the cause of warfare as well as politics.
New Spells - These are another great source of spells for your OSRIC or AD&D first edition game. A nice cross section of spells.
Little Prayers (article/spells)- Clerics need love too and this is an excellent article for dealing with the cleric aspects of a campaign. With a bit of work this is a perfect excuse for adding in more politc to your clerical campaigns with these spells playing a role.
Cat Of Nine Lives (monster)- This is a great monster and adding these guys into a science fiction or science fantasy game can really throw the players.
Boggarts! (article/monsters)- These are a classic monster that needs more love and play time in games.
Scion Of Cthulhu (monster)- These Locecraftian horrors have seen a workout in my campaigns and adventures. From Carcosa to Stars Without Number, the Scion of Cthlhu has made appearances in one form or another my players hate these things.
Spells for the Sophisticated Travelling Wizard- I've used this article for spell slingers in Spell Jammer to sophisticated traveling wizards in science fantasy campaigns. Wizards are great sources of adventure and this article adds yet another backdrop for them.
Clerics Turning Undead (article)- Clerics and undead are always an unholy combination and this article goes towards trying to clear up the confusion. Mostly for OSRIC and AD&D first edition with some cross over into other editions.
Random Encounters (article)- A good overview on random encounters in games and a welcome article. Well written as well.
Master Encumbrance Guide (article)- This article is welcome because encumbrance seems to cause lots of arguments among players. Articles such as this one help with this issue.
All in all this is one of the most useful issues of Footprints at least to me. The articles are well balanced and informative. Get this one while you can and go to town with it for your OSR sets of adventures!
So while most of this issue of Footprints makes itself useful for AD&D first edition & OSRIC there's lots of room to really customize it to your own campaigns. This makes Footprints a very underrated resource in my personal opinion. Dragons foot can be a bit of a mine field as a forum but the material is top notch.
Posted by Needles at 10:04 PM