Path Of The Monster's Fury - A Frankenstein Laden Psychic Power 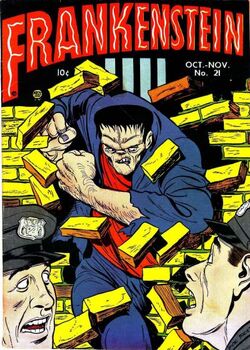 Monsters are made in the nightmares of their creators & this path of power is frought with it. The power was created in the mid-20th century by a villanous American scientist who drew inspiration from Mary Shelley's classic novel.  The monsters are made from the animated parts of the dead & reanimated by power beyond the ken of men! The world powers of Earth used these creatures as fodder for their military domination of the planet. This path has been thrust upon those who have access to it tremendous abilities. These creatures are remorseless killing machines & will berserk gaining dangerous adrenaline levels of strength & resistance.
For far future games there are cults who are still engaged in the practice of creating these monsters & the bodies of adventurers may be fodder for them! These cults will invest time & money into their creations. They have been known to rent them out as mercenaries!
Any characters using this path or being used are -1 or -2 on charisma due to their appearance. A rare few however are +1 or +2 but have the scent none the less.They gain +1 on constitution  & stamina. However the monster gains the Scent of the Unnatural. No matter how human they look or act they are artificial & outside of the world of the natural. They are at -1 on all social rolls & may be driven from their domiciles from time to time.
A good example of the type of creature for whom  these have been create can be found Here
Sense The Naturals Level 1 - The monster is able to sense humans & near humans around him. His senses are supernaturally sharp for 1d3 rounds. All skill checks at +1 for sensing traps, & hidden doors. Any sharp noises, heavy metal music will cause pain to the monster. These creatures take double damage from fire & acid. They are subject to fear as well.
Call of The Lightning's Fury - Level 1 The character is able to absorb massive amounts of electricity without harm. In fact if damaged the character is able to heal 1d3 points of damage under the influence of the stuff. They may do nothing else while electricity rains around them.
Wrath of The Monster - Level 2 The user gains +1 on all combat rolls. Those around him must save versus fear as the unnatural wrath of the thing is unleashed! His face becomes a thing of horror & terror. Even friends must make this saving throw as they see the true face of the beast unleashed!
The Cold Comfort of Death Level 2 - Cold of any type will simply put the horror into a state of suspended animation or deathless sleep. The body's cells are not dead eternal lie & so the monster is perfectly preserved against most environment hazards. A jolt of electricity doing 1d20 points of damage will animate the monster & restore 1d4 hit points though.
Release the Fear Of The Monster Level 2 - The creature creates a minor effect that causes those around him to stare in awe for 1d3 rounds. The player & dungeon master create the effect!
Horror  Of The Wretched Level 3 - The monster pulls from the depths of his tormented soul the fury of a thousand lightning bolts to rip the wings of angels & demons. His wrath knows no bounds & he is able to damage creatures such as demons, ghosts, & monsters gaining a +1 to all of these attacks. This extends with weapons at hand including ad hock weapons! The monster is a picture of demonic fury & even those he is attempting to help must make a save versus fear!
Storm of The Dead Level 4 - The creature releases a bit of the animating force from within himself doing 1d6 points of damage to those around him in a 20 foot radius. The effect will last from 1d3 rounds. Those exposed to this must save versus fear or head for the hills.
Strength & Wrath Of Beyond! The monster gains a berserk state for 1d20 rounds & is +2 on all combat rolls. Friend & foe alike will not be known & the beast will tear everything around him as long as he can for an addition 1d4 rounds. This ability is a state of raw rage & those who use it will be weakened for  1d3 rounds afterward & must make a constitution roll to keep standing!  This state causes fear in all creatures around them!