So tonight we're doing a bit of conversion on characters over to the Buck Rogers system, BSing, & generally doing nerd stuff. I've reserved a copy of Cowboys & Aliens for us tonight & I'll let you know about it.
I'm going to take this opportunity to talk about one of my favorite games -- ever.
Boot Hill 3rd edition 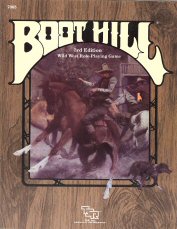 Character creation is simple and direct, rolling two ten-sided dice and using modifiers listed in the book. Characters have scores in strength, coordination, and observation. Basic rules are: roll a twenty-sided die, and attempt to roll under under your attributes or your skill rating. Secondary scores, rated one 1-10, are stature and luck. Adding all these up to provide the character a number of skills. With experience, you can improve your attributes and skills.
It does exactly what it says on the box! Its a fast representation of the old west as it exists within the creative unconsciousness.
There are stats for every one in this game from Jesse James To The Lone Ranger & even stats for Gary Gygax himself as Grandpa Gygax
This system enables you to rattle off Npcs & Pcs quicker then a movie six shooter. However good luck finding a copy of the game. At 69.95 the Amazon scalp hunters are after blood. More later folks
Posted by Needles at 9:19 AM