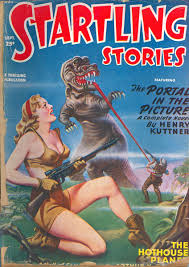 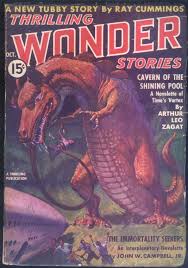 Gibbering Hathac-skegth
# Appearing : 1-3
AC: 6
Movement: 9
HD: 14
% In Lair: 85 %
Treasure: Nil
Gibbering Hathac-skegth are terror weapons brought to Carcosa over 4,000 years ago. These monsters stand 17 feet tall & are the most dire & terrible creatures around. A curse upon the brain of madness that created these terrible titans. They are hunters of  opportunity & their burbling hunting roars can be heard for miles. The sound carries though their fetid jungle home. Through some weird effect sounds far away when these monsters are camouflaged right by.
The first indication that these monsters are close at hand is a lashing attack by their barbed tongues which will cause 1 point of damage upon the target once it wraps around the victim. It will cause an addition damage each round until the fool is drawn into the mouth where they will be bitten for 1-6 points of damage.
Anyone who survives the vile attentions of these monsters will subject to disease of the worst kind which lives in the mouths & breeds in the gullet of these monsters. See matrix for disease type. Only science & some spells may cure. They will ignore other attacks made against them as the thick hide protects the monster against all but the most dangerous attacks. The tongue will regenerate in 1d3 days & extends 20 yards. The monster reels the prey in & can strike with it ever other round. They have been know to make a toxic spit attack as well. This spit will be septic & caustic causing 1d3 points of damage as well. The victims will be subject to disease.
The sound of combat will attract others of this horror's type which will try to steal prey from the beast. These beasts are found throughout space & have been seen on many worlds. There are several different mutations of the basic species & all breed true. There are several alien races still breeding the things in space & traffic in these horrors is quite rapid.
Please note that these monsters are done in the old version of Carcosa & not the newer version. These monsters may be used with other retro clones with some adjustment & would make a fine apex predator in other settings as well.
Posted by Needles at 9:34 AM