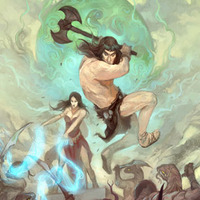 So I just was reading through D101 website & came across this little tid bit. Blood of the Dragon is the first C&T module for low levels (1st-3rd). Which after reading through Crypts & Things the characters are going to need.


Under a land shrouded in volcanic ash punctuated by rocky spires that tear at the sky they say the Dragons sleep.  Tyanos the Black, Trickster god of the long dead Hu-pi people stole their blood and  bottled it for his insane delight. As drink of the gods it confers immortanlity to mortal man, but at what terrible price?
In fact the very quest for this elixir is insane. A trip into a harsh and unforgiving land of the Spires, a poor and bandit ridden weirdland, inhabited by the likes of Black Joop, Nigus the Headless and the Mother of Hydra. Names that should send a shiver down your spine. So pick up your sword, down the last of your ale to steady any nerves and stride off towards a great adventure into the Ash Plains.”

Blood of the Dragon is the first C&T module for low levels (1st-3rd).  It was originally intended to be a one page dungeon, inspired by some inane Twitter banter between myself, Sacha Ratcliffe and John Ossoway. Then it grew like a small shoggoth and was next slated to be the introductory adventure included with C&T. Then it out grew that spec and mutated into its current form of a standalone adventure module.
I’m still pulling it together but my plan is to have a couple of adventure locations detailed , so you can get stuck in and play straight out of the box,  a guide to the land and encounter tables which facilities sand box play, and some colourful npcs that the pcs can meet and inevitably rub up the wrong way. There’s also already one new monster group, a tribute to a certain 70s Sci-fi movie series that stared Roddy McDowell in a mask

.
The idea here that they're paying tribute to Planet Of The Apes is awesome! I'm a sucker for all of the old original White Dwarf adventures. This isn't really nostalgia talking here but honest to God thinking & planning on my part. I have & have not used in a very long time Runequest mostly because of the scale of the setting. However with Open Quest being on the market that might have to change.

Perhaps this is the Grognard in me, but I'm used to picking up a module and either sitting down and coverting stuff out beforehand or just doing it on the fly - I know what a goblin is like in AD&D so I don't care what the "fiddly bits" in the text say a goblin does, I can convert that pretty quickly. I did that back in the day with everything from Tunnels and Trolls to Stormbringer to Middle-Earth Role-Playing - why would I stop now?
This product has me very intrigued

This looks like its out for the Open Quest. From the description on lulu -
Know, oh Emperor, that between the years when the Dragon Drakkar froze the evil Serpent Empire and the rise of your own father’s domain to the south, there arose barbarian kingdoms in the Savage North…” Contained within is a Saga of Swords and Sorcery action set in cold barbarian lands, where savage warriors stalk evil monsters in mist shrouded forests. New lands and religions to explore and four adventures for OpenQuest. This book is also compatible with other D100 systems. Written by John Ossoway (author of Cthulhu Rising) with setting info and cults by Newt Newport
You can find this product on lulu Here

Now what the hell does this have to do with space opera? Surely you can't be thinking of using something like Crypts & Things or Open Quest for space opera?
Not only can you but you can do so with stuff that's within the public domain & not pay through your ears to do it.

H. Beam Piper is an author who should be counted among the greatest science fiction authors of eternity. Written in 1962 Space Viking is reads sort of like what if Robert Howard wrote science fiction & space opera.
The plot goes- Lord Lucas Trask of Traskon lives on the Sword World of Gram, but is opposed to the Space Viking raids, on which numerous of the most talented Sword Worlders leave and never return. However, when his bride is killed a half-hour after their wedding, Lucas fits out a Space Viking ship and sets out for revenge. Sickened by the waste of the Space Viking life, he finds himself returning to his older convictions: that it is better to build than destroy. But, he finds that there are many who find destroying a simple and easy life, and what is the murderer of his wife up to? This is the story of one man's odyssey across the remains of the old Federation, his life, death and rebirth.
Simply use the character class from Crypts & Things add technology & monsters. The book is easily available, well within the public domain, & lends itself to actual campaign play quite easily. Read the book here

Others have gone into far greater detail about the Space Viking such as the esteemed Old School Heretic blog Here
What many blogs that I've read fail to tell you about Piper's work is that he wrote stories & books that connect to one another. His works such as the Cosmic Computer over lap one another. You can read more about those Here
Piper is almost the complete opposite of Robert Howard -
This conflict makes excellent adventure & if you want to add this to a game I love. Grab Human Space Empire's timeline. Grab your ship & go off raiding & pillaging.
The best articles I've seen for Piper's work is Here 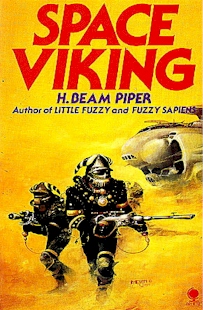