CARCOSA Monster - The Tribes of Lloat-bothuai - The Jungle Horrors 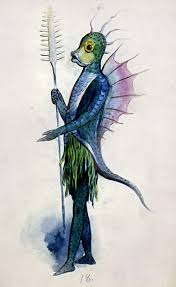 # Appearing:1-50
AC: 4
Move:9/24
HD:1+1
% In Lair : 85
Treasure:B taken from Deep Ones in raids
Beyond the blasted besalt planes of lower Carcosa lays the fungi forests of Nomm where few sane men venture. These places of fungi infested nightmare & dream are home to a species of gill men know as the  Lloat-bothuai. Brought as shock troops & experimental fodder by the space aliens of Carcosa. These foul things would be comical if not for the outrageously aggressive manner which they protect their homes & territories.
The Forests of Nomm are a place of perpetual  moisture that rains from the tops of the giant mushrooms that spring up over night here. The monsters hunt among the giant fungus with spear, blow gun, & net Their spears are tipped in the bacterial/fungi poison that they brew here. The stuff will paralyze anyone hit by one of these vicious barbed implements of doom. Unless a saving throw is made in which case the victim will simply turn blue & within 2 rounds stop breathing. These  freakish monsters have additional defenses as well.
As a  species they  have potent neurotoxins secreted from glands at the base of their needle-like dorsal fin spines which stick up when disturbed or threatened. Those who engage in hand to hand combat  will take 1d3 points of damage & must make a save or be hit with an burning pain.
The pain is said to be so severe that the victims of its sting want the affected limb to be amputated.
It is said that they sew up their victims lips after laying a clutch of 1d10 eggs within the mouth of the victim which hatch & eat the victim from the inside out in from 1d10 days. Only expensive super science or spells may stop this horrid process. 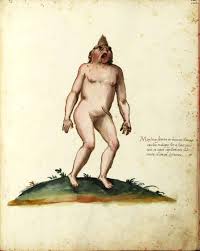 The Forests of Nomm grow cold & silent at night & because these nightmares evolved in the alien depths of some nameless forgotten sea they are immune to the effects of cold. They function as well at night as during the day. Their cold unblinking eyes picking up everything around them. It is said they sense the warmth of  human bodies but bright light does not bother them. They can function above or underwater with easy.
They have a racial hatred of deep ones & the two make war whenever they encounter one another. They often use blow guns which are seeped within their feces. The darts do only 1d3 points of damage but will cause bacterial infection unless a save is rolled. Still wounds caused by these darts will heal with strange jagged scaring & disfiguring brown welts.

Many  races of  Carcosa will kill  the Lloat-bothuai.on sight because of their bad reputation & horrid rites which they preform under gibbous moons when the stars are right. It is unknown who or what is worshiped. Tribes that have camped near Nomm report children & old folk missing in the night. They speak of giant white flesh less worms & hideous piping music in the night.
Posted by Needles at 10:07 PM