When I was a kid my dad got me a copy of  Carson of Venus  by Edgar Rice Burroughs. My dad was really very cool about getting me interested in the habit of reading and this was one of the books that got me started on that road to ruin.
According to Wiki :

"The novel, which was written two years before the outbreak of World War II, satirizes Nazi


Germany by including a fascist political faction called the "Zani." There is also a character named "Muso" as a reference to Benito Mussolini. Unlike the first two Venus novels,Carson of Venus focuses on spy intrigue and war instead of wilderness adventuring.


It is sometimes known as the Carson Napier of Venus Series, after their fictional main character, Carson Napier. Carson attempted a solo voyage to Mars, mistaken navigational calculations finds himself heading toward the planet Venus instead. The novels, part of the Sword and Planet subgenre of science fiction, follow earthman Napier's fantastic adventures after he crash-lands on Venus, called Amtor by its human-like inhabitants"


Carson of Venus is pure Burroughs with lots of daring do, exotic locations, bumbling of Napier, weird political commentary and lots of sword and planet action.
The Carson of Venus distills Burroughs ideals into a new setting and he does it with a bit more polish in some places then we see in later books. Here he's not afraid to experiment with the action and pile on the thinking at times. The location is the thing in this book.
Napier isn't suffering from the usual 'White Man's burden here. He's the fish out of water on an alien world of pretty intense savagery. Amtor isn't a pretty world or particularly nice at all to him or his space princess. They literally have to fight one thing after another just to survive and get through. It is done with a fine bit of style though.  The style of Venus in science fiction and fantasy has almost always been one of pulptastic imaginings especially with weird dinosaurs, slimes, and swamp monsters.  The novel has these in spades.
Do yourself a favor and find a copy today.
Venus has been making a comeback over the last couple of years in both OSR circles and with a movie being made.


"In 2004 film rights for the entire Venus series were secured by Angelic Entertainment, Inc. a film production company based in San Diego, California. Carson Napier (formerly announced as Pirates of Venus) is to be the first film put into production. A screenplay forPirates of Venus was completed and registered with the Writers Guild of America in September 2007. Bruce Pobjoy, Head of Production for Angelic Pictures, states that their intention is to be loyal to the integrity of Burroughs' writing, while at the same time updating, and modernizing the story for today's sensibilities, and sophisticated movie audiences. The film will utilize digital techniques such as used in Sky Captain and the World of Tomorrow, Sin City and 300 to display the exotic world of Amtor hidden beneath Venus’ clouds.[1] [2] The film is expected to be released in 2014"
The official movie website can be found right over HERE


Adventuring on Amtor For Your OSR Make no mistake Amtor is Old Venus and its a water world with some very tight twists to it.
I've used the setting a number of times and its always a trip to watch jaded players suddenly discover some of the weirdness that Atmor has in store for them.
Venus has always had its weird little water soaked place in Science Fiction and its only with games like Space 1889 and OD&D where it really got a chance to shine. You can find more about the depictions of Old and New Venus right over HERE
Complete maps of Amtor can be found right over
HERE.

Amtor is a verdant world shielded from the heat of the sun by a (nearly) perpetual cloud cover. The portion depicted, largely confined to the southern hemisphere's temperate zone (or Trabol, as it is known to its inhabitants), is primarily oceanic, but includes twocontinents and a number of large islands.
The main continent is Thora, extending also far into the tropical zone of Strabol and the arctic zone of Karbol -– possibly as far as the south pole. Several smaller land masses projecting into Trabol from Karbol appear to be peninsular extensions of Thora; these include Bombaj, Ator, Rovlap, Vodaro, and Vaxlap. Interspersed among these are the great islands of Ganfal, Malpi, Donuk, Movis, Nor, Anlap, Vepaja, Trambol, and Zanbo. The unnamed second continent is a largely tropical landmass north of Vepaja and west of Thora.
Amtorian vegetation, particularly on Vepaja, tends to be gigantic. Vepaja is notable for the enormous forests Napier first encounters upon his arrival, with trees reaching into the inner cloud envelope. Elsewhere, the geography of Amtor is more varied, and he also travels through a dismal pine forest, grassland plains, glacial valleys, and several mountain ranges.
Cartographers of Amtor's southern hemisphere believe their world is a flat disk, with the fiery equator as a point at the center, while the south pole is distributed around the edge. Amtorian maps therefore greatly distort the distances, sizes, and shapes of surface features.Den Valdron has a wonderful article that goes into much more depth about Amtor  Right over HERE

Wiki does a nice job of covering the basics for Amtor and its people.
Here's the Wiki entry:
The human natives of Amtor are a generally inhospitable lot, often trying to murder Napier, kidnap his princess, or both. Their nations are rather loosely connected, partly because the geography is strewn with impassable mountains, impenetrable forests, and unnavigable seas (which Napier nevertheless passes, penetrates, and navigates), and partly because their maps are somewhat unusual. In spite of their relative isolation from each other, a worldwide language is current among all peoples. The level of culture runs the spectrum from savagery to advanced technology; some nations possess a longevity serum, atomic ray guns, and nuclear powered ships. Radio is unknown (the ships are reduced to communicating by flags), and there are no native aircraft; Napier designs and builds the first, based on Earth technology.
The other impediment to communication, Amtor's quirky cartography, stems from the inhabitants' bizarre cosmology, which at least in the southern hemisphere where Napier lands holds that the world is a flat disc floating on a burning sea, with a rim of ice and a center of fire. As the "rim" is actually the south pole, and the "center" the equator, Amtorians have an extraordinarily distorted view of their planet's surface, and their maps are warped accordingly. Due to the perpetual overcast, they have no celestial markers to correct their geographical mismeasurements, let alone on which to base the concepts of a solar system, other worlds, or the stars. The difference between the observed and theoretical versions of geography are reconciled by a pseudo-scientific "Theory of Relativity of Distance", which resolves the problem by multiplying by the square root of minus one. Napier finds it difficult to counter this rationale, noting that "You cannot argue with a man who can multiply by the square root of minus one." Such wry digs are typical of the series.Den Valdron has another  wonderful article that goes into much more depth about Amtor's Cultures right over HERE
Monsters of Amtor! There are some seriously messed up alien lifeforms that are just waiting to devour your adventurers and planetary explorers.
These run from the 'Vere' to the 'Tongzan'!
This time the master of the monsters is Sean Philips over at the ERBzine.
He's got a killer article up about every single beastie found in the books.
Right over Here 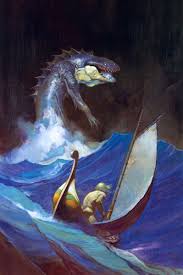 Edgar Rice Burroughs wasn't the only author to write about Venus. There have been a metric ton of pulp authors who wrote about the cloud shrouded planet. There is  however an article that goes into possibly placing a number of the pulp Venus sources into the background of Amtor!
This article also by Mr. Valdron does an excellent job of dealing with the science fantasy of the weird world of Venus.
You can find that right over
HERE
Carson of Venus is not within the public domain and is the property of the Burroughs Estate. This blog article is for entertainment purposes only and does not seek to break the trade marks or copyrights of any of the holders of this material. Artwork is being used without permission only to demonstrate the background of the 'Carson of Venus' books. These images are the property of their copy right holders.
This blog owner would like to thank the ERBzine owners and the writers for inspiring this article.
Thank you.
Posted by Needles at 8:31 PM