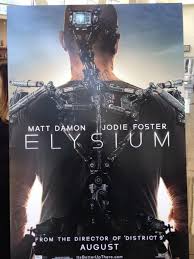 So I got dragged out to Elysium today. This new movie stars Matt Damon as sort of futuristic resistance fighter/Ex-Con who lives in the ruins of Los Angles.

Here's the basic plot from Wiki with major freaking spoilers
In 2154, two classes of people exist: the wealthy, who live on an advanced space station called Elysium, built by the Armadyne Corporation; and the rest, who live on an overpopulated, ruined Earth. Secretary Jessica Delacourt (Jodie Foster), deciding to preserve the luxurious lifestyle of the citizens of Elysium, employs psychotic mercenary Kruger (Sharlto Copley) to eliminate the illegal immigrants attempting to reach Elysium and use its advanced Med-Pods. President Patel (Faran Tahir) disagrees with her methods and threatens to dismiss her, in addition to firing Kruger. Delacourt then convinces Armadyne's CEO, John Carlyle (William Fichtner), to write a computer virus that can override Elysium's controls and make her President. Carlyle stores the virus in his own mind for safekeeping until he leaves Earth for Elysium.
Read the wiki entry HERE


The Official Movie Site can be found right over HERE
Here's the trailer
The action sequences were very well and the CGI were alright but we're getting a bit used to seeing some of this stuff. The story was solid but was depressing as hell. The whole affair felt forced and the director seemed to really want to ram the movie's message right down the throats of the audience. According to Wiki:
When asked whether the film reveals how he sees Earth turning out in 140 years, director Blomkamp responded "No, no, no. This isn't science fiction. This is today. This is now."


This isn't up to District 9 standards but it is damn close. Some of the 'evil white guy' vibe throughout the picture began to get a bit thin. While only the  hero saved everyone felt a bit like I was visiting the days of 'White Man's burden' all over again in films. I'm not saying that film is panning to stereotypes but a bit more overview of the world of the movie could have shown some more racial variety. Especially given the scope of this film. See this one on the big screen but go in a very broad view.
This one might be more of a rental or a Netflixs if you don't want to see the action on the big screen. 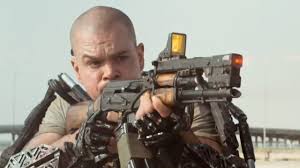 While I actually did enjoy the film. The reason was simply because there is so much here for a DM to use.  This film's locations, equipment, and the primitive exoskeletons are perfect fodder for Mutant Future, Stars Without Number, and many of the science fiction retroclones on the market.
This movie is a perfect showcase of how to do a Mutant Future game as a post invasion campaign. The game already has about 60% of the gears and gats built into it. This is also true of Stars Without Number. The film pulls readily from the pockets of Syd Mead and this shows through quite well.
The ideas of many of the encounters in the film would make a very excellent world to play in. There is however that the players PC's would all have to be on equal footing here. This is a world of haves and have nots. It could become very preachy if not done with a bit of a light hearted pan to it.
There were lots of lovely gadgets, guns, and gats to borrow for your post apocalyptic or post space invasion game. The ideas of the PC's being ex cons, gladiators, cyborgs, etc. suddenly became very sexy to use in an old school game.
The film tries to  explore political and sociological themes such as immigration, health care and class issues but these really are better explored at a gaming table with healthy doses of mutants and mayhem.
I would say that if you can catch this one at the theater do so. But the fact is that this film might make a better center piece to a space based game.
Here's an IO9 article featuring all of the cool toys from the movie.
HERE