Get right over HERE
Death Hawk premiered way back during the 'black and white craze of the 80's. And he's been pretty silent  until now.
According to Mark Ellis :
" It's a 150 page TPB featuring beautiful art by ADAM HUGHES & RIK LEVINS and a gorgeous cover by DARRYL BANKS and MELISSA MARTIN-ELLIS! If you love space opera and FIREFLY you'll really love DEATH HAWK!" 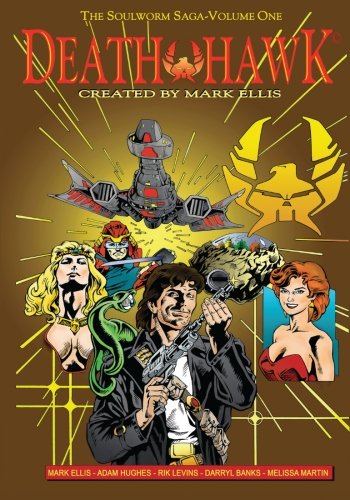 Death Hawk is essentially what I'd love to see in a group of Stars Without Number adventurers. A wise cracking adventurer troubleshooter with delusions of greatness who actually possesses the guts to get the job done.  Did I mention the blob of proto plasmic life form that is his side kick and friend?

The series takes place in the same universe as 'Star Rangers'. According to Ellis :
It was a “space western”, but the series dealt with a number of different themes. In retrospect, it comes off more as Gunsmoke than Lonesome Dove.  Anyway, the actual page count of the Star Rangers stories didn’t fill out all of the issue, so I was asked to come up with a back-up feature…basically dealing with an outlaw as the main character, which I thought would be an interesting counterpoint to the main feature about futuristic law officers.

"As a recall, the editor wanted Death Hawk to be an assassin type, but that kind of character never set well with me…even though the story showed him acting as a hired killer, he didn’t actually assassinate his target.
In the next story, “What Rough Beasts”, Death Hawk exacts revenge on a man who betrayed him and his group, but again—he doesn't actually kill anyone, he just sets up the situation so poetic justice can take place.

I came up with the concept that Death Hawk was a “Salvage Expert”, sort of like a futuristic Travis McGee. That covered a whole gamut of enterprises, from the legal to the illegal."
This is a perfect formula for a Stars Without Number game where the PC's are intergalactic trouble shooters or Salvage Experts. This is actually where I came up with part of my Talon sector campaign.
The Talon sector isn't set in the universe of Death Hawk or any of his other creations. I borrow heavily from the concepts but not the universe itself.
This has also been true of this book by the pen of Ellis as well.
Weird Alien Gygaxian ecologies, strange post apocalyptic planet, desperadoes in space, and much more!

You can get this one right over HERE
All of these just happen to take place in the same weird western style science fictional universe that happens to come from the pen of Mr.Ellis.
Now with the Soul Worm Collection the worlds of Death Hawk, The Star Rangers, and Loki's Rock are coming straight out into the public eye once again.

This is a pretty solid history of the universe of Death Hawk and The Star Rangers. This is actually a good solid blue print for creating your own campaign histories. This is pretty much what an old school science plan would actually look like from a Star Frontiers game or even a Travelers game. The same technique works quite well for Stars Without Numbers. The fact is that Stars Without Number is perfectly geared for just this sort of space western action.

September 7th, 2010No Comments »
In the late 21st century, after several Third World powers engaged in a limited nuclear exchange, multi-national corporations took over the division and parceling out of Earth’s resources. Within a short time, corporations and conglomerates had no choice but to move out into space.

Nippon International constructed a permanent mining outpost on Luna and the terraforming of Mars began by Creations Unlimited. Hiflite Industries developed the first Bussard Ramjet space vessel that could achieve a maximum velocity of one percent of light speed.
When Nippon International discovered a number of asteroids rich in rare ores and minerals, hostilities broke out between it and several other corporations in a dispute over ownership of a mountain-sized asteroid.
The hostilities were quelled by the formation of the Sol 9 Commonwealth, an international governing body which called for the peaceful and cooperative exploration of the Solar System.
A fusion-reaction drive was made safe and feasible by Hiflite Industries and space vessels were able to travel at five percent of light speed. The exploration and exploitation of the furthermost planets in the Solar System accelerated.
When more hostilities broke out among competing corporations, the Commonwealth established the Star Rangers Corps.

By the end of the 22nd century, three corporations dominated almost all trade in the Solar System: Nippon, now calling itself Nippon Interstellar, Tactron and Utopia Import.
Also around this time, BioTek Industries achieved a breakthrough in genetic engineering—they developed the TH-1 series of TransHumans, synthetic humans. The TransHumans  were just the first examples biological products created by BioTek, owned by the Chane family. Many others followed over the decades, including the protosymbiotes.
Hiflite Industries patented the ion drive which powered ships to a maximum velocity of 20 percent of light speed. Exploration of extrasolar space commenced and the first extraterrestrial contact was made with the pacifistic Saideem…

The Saideem were the first to tell the Terrans about the long-dead race known as the Skril who had dominated the galaxy eons before.
The first evidence of the Kraith Tyranny was discovered when a manned probe dispatched to the Orion Spur was captured. The Kraith were a warrior race with a technology almost matching that of the Commonwealth.
They ruled many planets in the Orion Spur, where hundreds of the worlds and moons were perfectly suited for human habitation and colonization.
Hiflite harnessed the qualities of geon packets and they created the first generation of geon-drive space vessels that traveled at 25 percent of the speed of light. When more exploratory probes were sent into the Orion Spur, confrontations between the encroaching corporation survey ships and the Kraith Tyranny increased.
In the late 23rd century, war broke out between the Kraith Tyranny and the Commonwealth. The Arcturans joined the fight on the side of the Commonwealth. When the war finally came to an end over 20 years later, the few surviving Kraith committed suicide rather than surrender to invaders.

With the defeat of the Kraith, corporate expansion into the Orion Spur increased at a furious pace. Geon drive starships were upgraded to 50 percent of the speed of light. Many planets in the Orion Spur were claimed by various companies and over the next century, the Sol 9 Commonwealth lost most of its governing influence as the corporations relocated their central operations to the Spur.
Amicus, a Spur planet established during the war as a supply depot for Commonwealth and corporate forces, declared itself a Freeworld. As Amicus’s private military was quite formidable, their declaration of independence was not opposed.
A mysterious figure known only as Lord Rogue set himself up as the titular ruler of the planet.

A group of disaffected “corporate outcasts” began preying on corporation shipping and outposts. Although they attacked only corporate trade lanes and colonies, the so-called “Death Hawks” intended to foment insurrection throughout the Spur. For over a decade, the Death Hawks were the terror of the spaceways.

But in 2485, the Death Hawks were wiped out by a force of mercenaries, betrayed by traitors within their own organization.
Shortly afterward, rumors began circulating of the sole survivor who took the name of the marauders as his own as he tracked down and exacted vengeance on the betrayers. He was never apprehended.
In 2488, the man calling himself Death Hawk set up a salvage business on Amicus, buying an outdated but reliable transport ship. There, he quickly built a reputation as a man who could be hired, but never bought…

Death Hawk is back and that brings a smile to my face. It also happens to bring a real groan from my SWN players because they know exactly the sort of action that will be happening in the Talon Sector soon enough.

Death Hawk Support For all of your Death Hawk Space Western action go right over to the official site
HERE
And the wiki entry on the character right over
HERE
Posted by Needles at 9:58 AM