My own experiences with Fantastic Adventures began when my uncle gave me a stack of these magazines to read when I was in the hospital & my experiences with Khor an adventurer from Crete began. 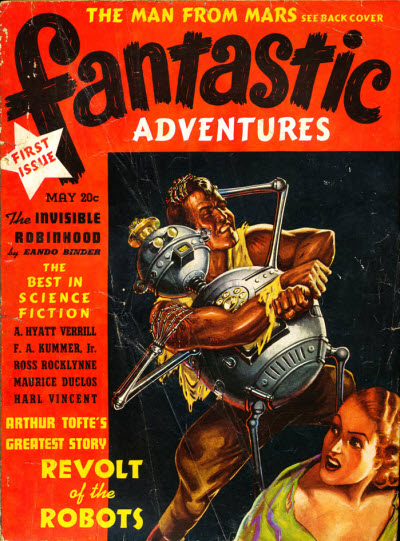 The contents tell the appenix N influence & shows the Pulp draw of the material:

Time & again I've used Fantastic Adventures as the basis for many of my table top games. The pulp issues varied in quality & this was one of the reasons why from time to time the Sword & Sorcery stories were inconsistant. But this issue was a calssic & had some fantastic stuff in it. Why was that?! Well its because of the history of the publication according to the wiki entry on Fantastic Adventures;
"Fantastic Adventures was an American pulp fantasy and science fiction magazine, published from 1939 to 1953 by Ziff-Davis. It was initially edited by Raymond A. Palmer, who was also the editor of Amazing Stories, Ziff-Davis's other science fiction title. The first nine issues were in bedsheet format, but in June 1940 the magazine switched to a standard pulp size. It was almost cancelled at the end of 1940, but the October 1940 issue enjoyed unexpectedly good sales, helped by a strong cover by J. Allen St. John for Robert Moore Williams' Jongor of Lost Land. By May 1941 the magazine was on a regular monthly schedule. Historians of science fiction consider that Palmer was unable to maintain a consistently high standard of fiction, but Fantastic Adventures soon developed a reputation for light-hearted and whimsical stories. Much of the material was written by a small group of writers under both their own names and house names. The cover art, like those of many other pulps of the era, focused on beautiful women in melodramatic action scenes. One regular cover artist was H.W. McCauley, whose glamorous "MacGirl" covers were popular with the readers, though the emphasis on depictions of attractive and often partly clothed women did draw some objections."
And this brings us to “Adventure in Lemuria” (Fantastic Adventures, May 1939) which has Khor, an adventurer from Crete finding action while using his double-bladed axe. But who was Frederic Arnold Kummer according to The Encyclopedia of Fantasy (1997); "Frederic Arnold Kummer (1873-1943) US writer who concentrated for much of his career on detective fiction, beginning with The Green God (1911). The Second Coming: A Vision (1916 chap) with Henry P Janes is a World War I fantasy in which Christ appeals for peace to the Kaiser. FAK also wrote two Afterlife fantasies, Ladies in Hades: A Story of Hell's Smart Set (1928) and Gentlemen in Hades: The Story of a Damned Debutante (1930). In the first, Eve establishes a club in Hell; in the second, a young woman who has just been killed makes good in Hell, flirting with Benjamin Franklin (1706-1790), Noah and eventually Satan. A mild eroticism permeates both books, in the fashion of Thorne Smith.

other works: The Earth's Story #1: The First Days of Man, as Narrated Quite Simply for Young Readers (1922), a Prehistoric Fantasy." 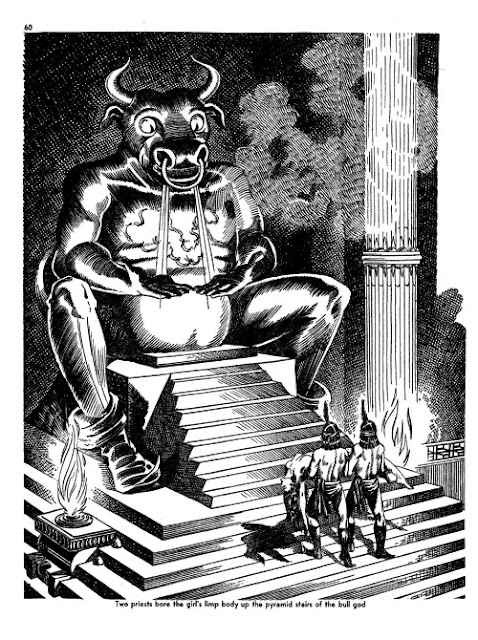 Adventure In Lemuria  by  Frederic Arnold Kummer, Jr. has all of the classic Appendix N ingrediants that make  Fantastic Adventures No 1, May 1939 such a classic issue. All of the ingrediants for a classic campaign are lurking in the background of this issue.