Half demons have always been troublesome but when it comes to the sons & daughters of the Abyss that's a whole different level of Abyssial trouble! This is five pages of Abyssial fun waiting to happen to your players. 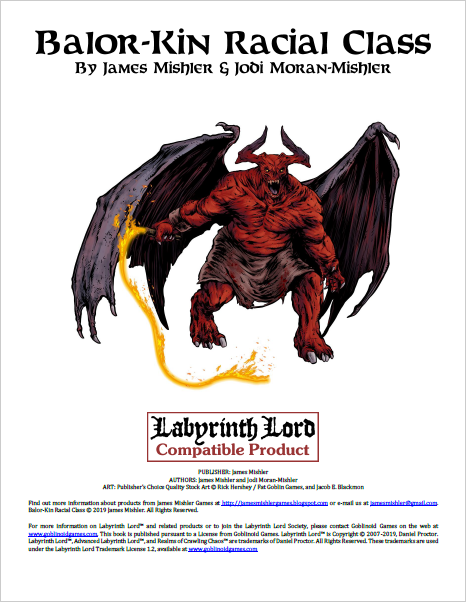 That's where 'The Balor-Kin Racial Class' For Labyrinth Lord comes in. Now let me go on record as saying that this is not a RC that's I'd allow at the table unless I was runnning a very high level Abyssial  game. The goes up to ten levels & I'd use it to create a very nasty & devestating demonic NPC villain. Why because of the unnatural abilities of one of these Abyssial bastards:

"Balor-kin have the following abilities:
The balor-kin racial-class has 10 levels, each more fiendishly powerful than the last. "

No way was this meant for a PC of any type but for use with a NPC villain. This is a portrait of a young & very dangerous demon waitin to be sprung on your PC's! Let's get a little reminder here of the Advanced Dungeons & Dragons Monster Manual origins of these demonic horrors. What the 'The Balor-Kin Racial Class' For Labyrinth Lord is distills all that bottled demonic evil & brings it to your table top adventures. Believe me your players are not going to thank you for this!  All of the normal Monster Manual abilities are there but in miniature. 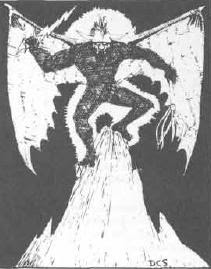 The classic DCS Monster Manual artwork that does not appear in the
'The Balor-Kin Racial Class' For Labyrinth Lord but I'm using it for context.

Let me go into the publication history of the Balor from the Balor wiki entry to give some context on the most dangerous of demonic horrors & overlords; "The balors found in Dungeons & Dragons have little relation to the mythical Balor of Irish mythology, actually being based on the balrogs of The Lord of the Rings,[2] and some of its derivation can be seen in its physical description, with its fiery aura, sword and flaming whip.[3]
In the original Dungeons & Dragons pamphlets, this breed of demon was known as balrog,[4] but the name was revised in subsequent supplements to simply "type VI demon" so as not to infringe on J. R. R. Tolkien's copyright.[citation needed] In second edition AD&D, the name "type VI demon" was revised to "balor," taking the name of the greatest individual of their rank as the name for the entire breed.[5] Also in second edition, balors now had vorpal swords.[6]
Gary Gygax, in his Gord the Rogue novels, has alternately called them raloogs or conflagranti.[citation needed]

The type VI demon appeared under the demon entry in the Eldritch Wizardry supplement (1976).[7]

The type VI demon (Balor, etc.) appears in the first edition Monster Manual (1977).[8] In this incarnation of the game there were only six Type VI Demons in existence across all of the planes of the multiverse, and they were ranked in power below only the Demon Lords and Princes of the Abyss, who were each unique in both name and form. Each Type VI Demon had its own individual name as an indication of their importance and power, as lesser demons (Types I – III and lower) had only a species name, and not individual appellations. Their names were listed in an appendix of the Dungeon Master's Guide, given as: Errtu, Ndulu, Ter-Soth, Alzoll, and Wendonai, with Balor itself being the greatest and most powerful of them all.


Essentially you'd be allowing one of the most choatic & evil of the Abyss's  demon lord's progeny in your old school games. Labryth Lord hasn't changed this! Their as evil & unpredictable as ever! The fact is that James Mishler has distilled them down into a useable form hasn't changed the bastards! 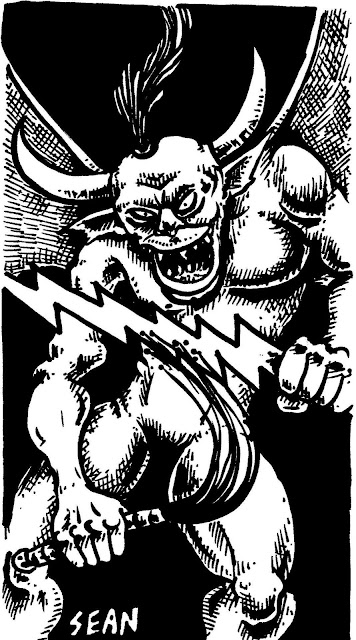 
This RC class is completely & utterely up to Mishler's standards, James & Jodi Mishler have done an excellent job of making this a completely usable class. But man would this class devestate a group of player's who had no idea of the depths of the Abyss they were taking on. The Labyrinth Lord version of this class is completely & utterly compatible with Advanced Dungeons & Dragons 1st edition. That means that even third party products such as the classic Mayfair Games Demon's box set is easily usable with  'The Balor-Kin Racial Class' For Labyrinth Lord. 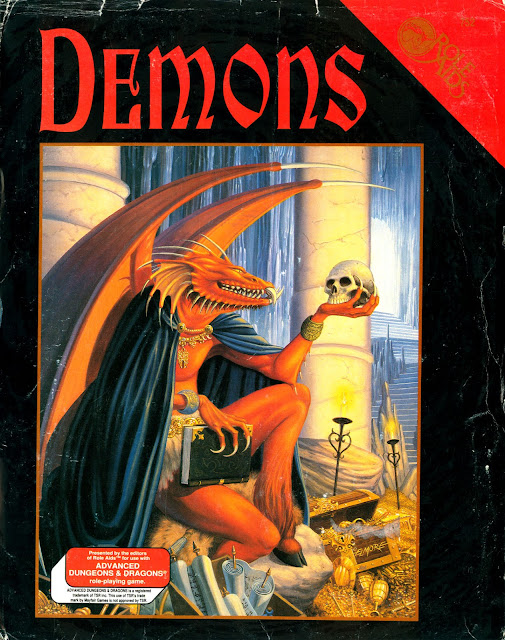 The Balor came straight out of J.R.R. Tolkein with different name & paint job but they are at the completely  chaotic evil bastards of old who are more then happy to tear the wings off of angels, challenge & destroy gods, & wreck the very foundations of creation as well as campaigns themselves. The 'Balor-Kin Racial Class'  is their progeny given form & function within campaign. Use & allow these very carefully within a campaign. The PC class is streamlined to allow the monster to grow with the player characters & that's something unto itself.
Is  The 'Balor-Kin Racial Class'  well done? Oh most definitely. But would I allow it into a game? Only as an NPC class to challenge the highest level PC's or the progeny of the gods! This is a class to be the heart & soul of a game campaign.
Posted by Needles at 11:17 AM