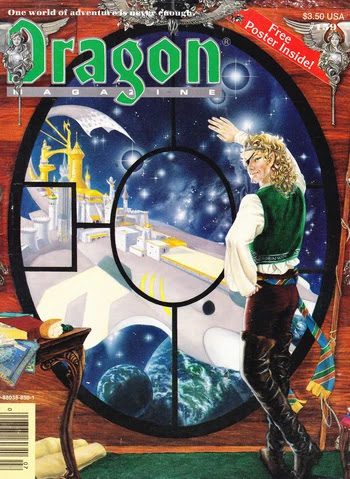 I wrote about the Ethreal plane with the origins of the Xill today. And yes its Dave Anreseon day but I'm taking a bit of time out to speak about one of my favorite articles of Dragon magazine. Confession time, I was never that much of a Spelljammer fan. Too bad there wasn't an Advanced Dungeons & Dragons first edition article about something akin to Spelljammer but totally separate?!
Gasp the world comes to an end but in Dragon magazine #159 we got the voidjammers article by Randal S. Doering & her captain archmage Peregin;

"About a thousand years ago, an archmage by the name of Peregrin became bored with adventuring on the Prime Material plane. He had overcome the most deadly foes of his world and had no interest in politics or a life of quiet research. Forsaking his home plane forever, he packed up his belongings and set off to seek a life in other realities and planes. He wandered dozens of planes, frequently crossing the Astral as he did so, and eventually it dawned on him that he could do something greater than simply wander in boredom. He decided to help travelers get around in the Astral plane, making their lives more interesting and exciting. Drawing upon his extensive knowledge of the planes, Peregrin traveled to a dozen worlds to secure the materials and craftsmen for the vessels that would accomplish his dream. He envisioned a fleet of mighty ships that would sail the Astral plane, picking up voyagers from thousands of worlds and realities and taking them wherever they wished to go. No being would be discriminated against on the basis of race or alignment, so long as each obeyed ships's officers when on Peregrin's vessel"

Now while this looks like a prime opportunity to use the Githyanki & charge right into the astral plane let's take a step back here for a moment. You've essentially got a taxi service on the astral plane  & a possibility of really getting in deep into an adventure location. Too bad there wasn't an adventure that had the astral plane as the central focus?! Oh wait there's Joseph Mohr's free Dragon foot site adventure called ZA6: Journey to the Astral Plane. "The crown of the queen of Zanzia has been stolen! The culprit has escaped into the astral plane. Heroes are needed to chase down this villain and recover this priceless artifact. Only brave and powerful adventurers of at least 10th to 15th level could possibly successful in this adventure." 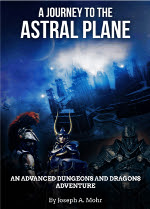 So the PC's can basically use the services of the archmage Peregrin to hitch back to their own reality once the events of ZA6: Journey to the Astral Plane are completed. This is a fifteenth level PC adventure but with a little imagination this adventure could be used as an introduction to the world of the Godbound rpg. The astral plane is not static & even higher level demi god adventurers are gonna have to think outside of the box. The archmage Peregrin & his officers are not to be trifled with. I've always thought that he might be a demigod in disguise because of some of the hints that were thrown into the article 'Voidjammers'. The Githyanki play a central role in this adventure & much of Joseph Mohr's module is up to his usual specifications. This might be a very good adventure to use with the essential Manual of the Planes book for Advanced Dungeons & Dragons first edition by Jeff Grub. 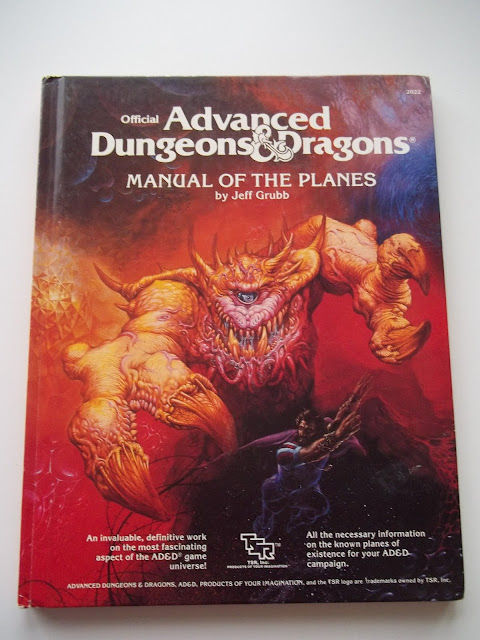 The material in this book is essential to a voidjammer campaign with the PC's dealing with some very nasty planar issues within ZA6: Journey to the Astral Plane. The players are going to have to content with the legacy of many of the astral plane most dangerous issues. Again many of the rules from Manual of The Planes are already in ZA6 but overall I feel as a dungeon master the PC's need those rules as backup. Its nice as a dungeon master simply to have them within reach.

Grab ZA6 HERE
ZA6: Journey to the Astral Plane
Posted by Needles at 11:15 AM