"The steady trend down the ages was from water to land; a movement encouraged by the rise of new land masses, though the ocean was never wholly deserted. Another cause of the landward movement was the new difficulty in breeding and managing the shoggoths upon which successful sea-life depended. With the march of time, as the sculptures sadly confessed, the art of creating new life from inorganic matter had been lost; so that the Old Ones had to depend on the moulding of forms already in existence. On land the great reptiles proved highly tractable; but the shoggoths of the sea, reproducing by fission and acquiring a dangerous degree of accidental intelligence, presented for a time a formidable problem.
They had always been controlled through the hypnotic suggestion of the Old Ones, and had modelled their tough plasticity into various useful temporary limbs and organs; but now their self-modelling powers were sometimes exercised independently, and in various imitative forms implanted by past suggestion. They had, it seems, developed a semi-stable brain whose separate and occasionally stubborn volition echoed the will of the Old Ones without always obeying it. Sculptured images of these shoggoths filled Danforth and me with horror and loathing. They were normally shapeless entities composed of a viscous jelly which looked like an agglutination of bubbles; and each averaged about fifteen feet in diameter when a sphere. They had, however, a constantly shifting shape and volume; throwing out temporary developments or forming apparent organs of sight, hearing, and speech in imitation of their masters, either spontaneously or according to suggestion.
They seem to have become peculiarly intractable toward the middle of the Permian age, perhaps 150 million years ago, when a veritable war of re-subjugation was waged upon them by the marine Old Ones. Pictures of this war, and of the headless, slime-coated fashion in which the shoggoths typically left their slain victims, held a marvellously fearsome quality despite the intervening abyss of untold ages. The Old Ones had used curious weapons of molecular disturbance against the rebel entities, and in the end had achieved a complete victory. Thereafter the sculptures shewed a period in which shoggoths were tamed and broken by armed Old Ones as the wild horses of the American west were tamed by cowboys. Though during the rebellion the shoggoths had shewn an ability to live out of water, this transition was not encouraged; since their usefulness on land would hardly have been commensurate with the trouble of their management."
HP Lovecraft At The Mountains of Madness

Looking back through the annals of Weird Tales & pulp science fiction its not hard to see the connection between John Carpenter's The Thing & HP Lovecraft's novella  At The Mountains of Madness. But there are far deeper connections here then at first meets the eye.


There have been suggestions that 'The Thing' is in fact an advanced form of shoggoth. The Thing has some similarities to the shoggoths from At the Mountains of Madness, which Lovecraft  described as "Formless protoplasm able to mock and reflect all forms and organs and processes". Another thing about the shoggoths is the fact that they have been growing more intelligent as time has gone on. So could the thing actually be an advanced weaponized shoggoth that was simply returning home over 100,000 years ago? I think so. John Carpenter's The Thing was a pretty faithful adaptation  to John W. Campbell Jr.'s Who Goes There?. The Thing seems to have had an agenda having crashed the saucer in the opening credits. Could it have been reacting to a homing instinct built into its design by its creators? I think so but 1982 wasn't the only brush that the Earth had with a shape shifting alien species.


In 1958 in Downingtown, Pennsylvania, a protoplasmic alien blob landed in a meteor and began a reign of terror happens again in 1972 in a different part of the United States. But what exactly is the Blob? Well there is fan speculation that the blob is in fact a form of a proto shoggoth. A prototype of  Elder Thing weapons system that has come back from deep orbit. Although it lacks the intelligence of the Thing, the blob is a different subspecies of shoggoth.The blob is an absorber where in the 'the thing is a copycat or imitator organism. In other words the blob is a proto shoggoth or a completely different configuration of the shoggoth organism.
"He has on rare occasions whispered disjointed and irresponsible things about “the black pit”, “the carven rim”, “the proto-shoggoths”, “the windowless solids with five dimensions”, “the nameless cylinder”, “the elder pharos”, “Yog-Sothoth”, “the primal white jelly”, “the colour out of space”, “the wings”, “the eyes in darkness”, “the moon-ladder”, “the original, the eternal, the undying”, and other bizarre conceptions"
HP Lovecraft At The Mountains of Madness.

In 1951  a United States Air Force crew is dispatched from Anchorage, Alaska at the request of Dr. Carrington (Robert Cornthwaite), the chief scientist of a North Pole scientific outpost.


At first Howard Hawks The Thing From Another World doesn't seem like a likely candidate to include here. But the alien carrot as its described in the film has many of the characteristics of the Elder Things. The alien of this film has many of the same same features as the Elder Things in humanoid form:
Its concerned with food, shelter, and reproduction. Also its another alien organism with a grasp of advanced alien technologies & a tremendous agenda for Earth. So what does this mean? The Howard Hawk's alien monster could be another product of Elder Thing radical biological genetic engineering. Surely, this radical fan theory violates the shoggoth/At The Mountains of Madness. Not at all this alien might be an advanced shoggoth entity prototype. 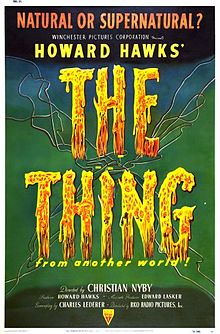 So what does this all have to do Dungeons & Dragons & Swords & Sorcery? The fact is that in Deities & Demigods Shoggoth's entry there's a clue about the D&D connection. It is stated that Shoggoths are often found in out deserted ruins &  areas often helping other Mythos races. The Elder Things prints are still found in a wide variety of places where their technologies are still in place. This goes back all the way to the ancient marshes of Mars as told in John W. Campbell's Brain Stealers of Mars. 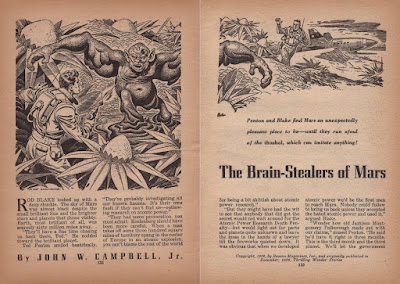 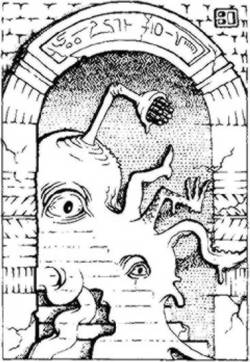 These shoggoth based monsters  include the gelatinous cube, doppelganger, mimics, trappers, lurker above,  a wide variety of oozes, jellies, including the infamous Green Slime, and many more. All of which are simply minor applications of the advanced biological mastery of the elder thing race. The spread of these creatures comes from certain cults & monsters as well as the preprogrammed behavior of the shoggoths themselves. Adventurers should be ware of the lower levels of certain dungeon locations.


"It was a terrible, indescribable thing vaster than any subway train — a shapeless congeries of protoplasmic bubbles, faintly self-luminous, and with myriads of temporary eyes forming and un-forming as pustules of greenish light all over the tunnel-filling front that bore down upon us, crushing the frantic penguins and slithering over the glistening floor that it and its kind had swept so evilly free of all litter.

— H. P. Lovecraft, At the Mountains of Madness" 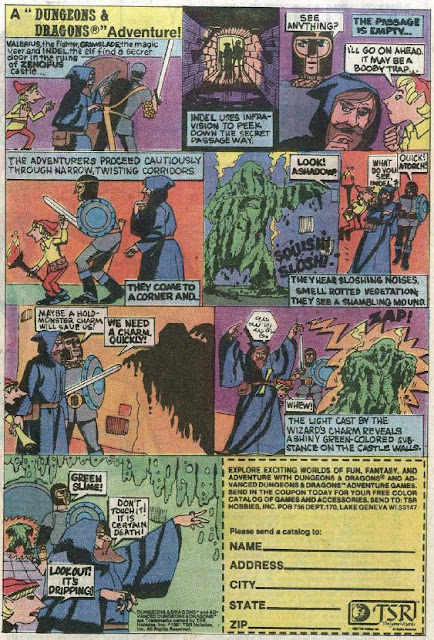 Ultimately the source of all of this is of course  Clark Ashton Smith's ' Ubbo-Sathla. Ubbo-Sathla ("The Unbegotten Source", "The Demiurge") or he who dwells in Y'quaa from which the dire arts of the Elder Things created the shoggoths themselves. This Old One is directly connected to  Abhoth ("The Source of Uncleanliness") for they are one in the same.


"There, in the grey beginning of Earth, the formless mass that was Ubbo-Sathla reposed amid the slime and the vapors. Headless, without organs or members, it sloughed from its oozy sides, in a slow, ceaseless wave, the amoebic forms that were the archetypes of earthly life. Horrible it was, if there had been aught to apprehend the horror; and loathsome, if there had been any to feel loathing. About it, prone or tilted in the mire, there lay the mighty tablets of star-quarried stone that were writ with the inconceivable wisdom of the pre-mundane gods.
—Clark Ashton Smith, Ubbo-Sathla"

There is an indication among Lovecraft and Clark Ashton Smith fans that many of these shoggoth based life forms ultimately no matter how intelligent or advanced must return to the original source of their creation at some point in their life cycle. This might have been a built in biological instinctive safety feature or a preprogrammed behavior. Or simply a flaw in the design that not even  the elder things could remove. Regardless this life forms and its attendant side creatures are ultimately some of the most dangerous horrors adventurers will encounter both in the dungeons and in ruins!