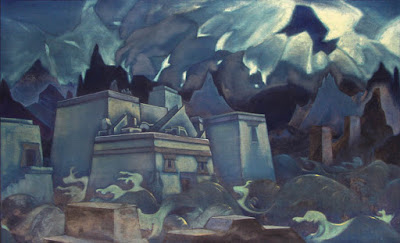 The Destruction of Atlantis  By Nicholas Roerich  Fair Use

I saw a city in a lonely land:
Foursquare, it fronted upon gulfs of fire;
Behind, the night of Erebus hung entire;
And deserts gloomed or glimmered on each hand.


Deep within the astral far from the flaming head of the 'decapitated god' is the frozen world of Freez'rea. A world created by the corpse of a robotic A.I. goddess whose back was broken by an elemental prince of evil. It is a world of frozen technologies & weird relics that attract more artifacts to itself. It is a world of ice and snow  that is fought over by two rival gods deep in the Astral plane. A world of ruins, dungeons, beauty, & lies. This is a world built upon the lie that it is a 'real' world but everything about it is artificial. From its peoples who were transported here upon the destruction of the empire of Atlantis, to the various species adapted with elemental ice mutations born & bred in the labs deep within the world. 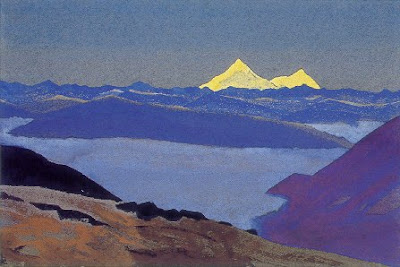 This is a world of magick & sorcery where the ice shamans sing to the planes of ice & the druids of the ice fells conjure up the dragons of myth to help them shape the world. Ice Salamanders stalk the rare elemental powers & feed upon anyone they come across whist scavengers pull relics from the ice corridors of old. Top prices are paid in the temporary city states  of ice and snow while ancient cults pray to the new gods. Empty promises are given to the cryomancers guild by the whispers of the elemental prince of evil & ice. Forbidden magicks, human sacrifice, & worse are lay at the feet of this weird guild. 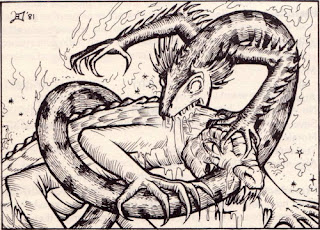 High over the land the floating ice bergs of the cults of Rlim Shaikorth spread his message of self inflicted destruction saying that all existence is a lie & this cult maybe right even as its members are hunted to extinction. Rival warriors, ice knight orders, & even the wizard warrior orders all try to extinguish this horrid cult. Meanwhile out in the wilderness Mi Go aliens hold court with their own worshipers for certain rare metals & elements from the salvage the cults take in. Promises of immortality in a mi go brain cylinder & the secrets of forbidden mad science fuel this cult. 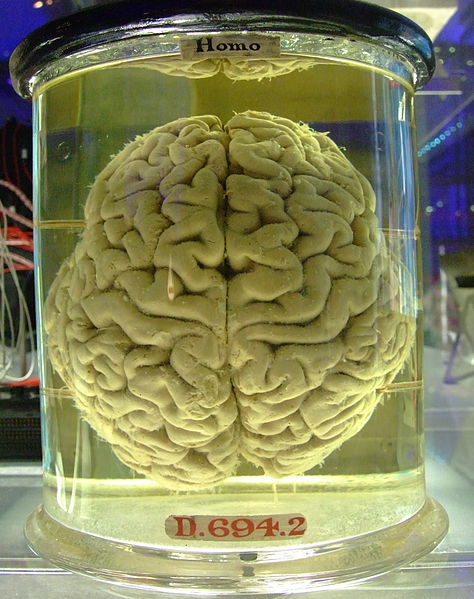 
The only permanent structure on Freez'rea is the Reg're Engine Works - A relic given to the humans here by the ice dragons. This is another piece of an A.I. god's brain that is used to create the ether ships so vital to the trade & economies of this worldlet. From the hulls to the mechanisms of the ether ships everything is assembled in this facility. Forty two ether ships are produced a year. Top gold pieces  are  given to salvagers & adventurers turn in the best artifacts that is used in the robotic mini factories for these ships. 'The engine' is another product of this place, a miniature time/space god product used to twist the fabric of the astral to travel anywhere or anywhen across the planes. 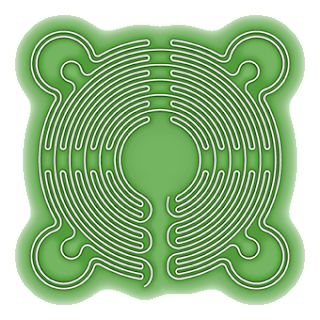 Alien species have been coming to the ice world for centuries to bury their dead. The 'green ice mazes' are a famous cemetery across the planes where the preserved bodies of seven million are interned for all eternity. The preserved faces of the dead stare out into the twilight of the underlit ice forever. The ice mazes have become a tourist attraction for those seeking the wisdom of the dead for centuries now.
Many seekers & moaners never leave here and several orders of monk & necromancer come here to mourn their own dead & learn the secrets of the death magick.