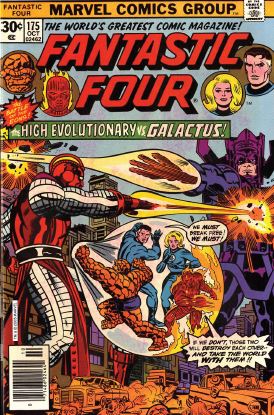 Sitting on the border of Latvia within the Marvel universe is Transia where the citadel of the High Evolutionary is high among the peak of the world sitting on Mount Wundagore. Foul & incredible experiments were wrought upon the genetic structure of mankind & animal alike. 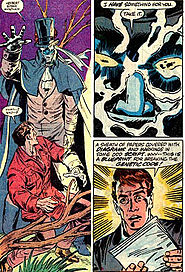 Here sits the "citadel of science"  of its master The High Evolutionary. A man who is (not would be) god whose uplifted any number of number of creatures predates H.G. Well's professor by a number of years.   He "uplifts" different animals into hyper-evolved animal men called the New Men.  Outfitted with advanced weapons and armour and trained in chivalry and battle tactics, they become the Knights of Wundagore and eventually leave Earth with the High Evolutionary to settle their own planets (Wundagore II and the Counter-Earth).

The knights themselves are pure Kirby with everyone of them  an individual & incredibly armored.Each carrying the weapon of incredible potential & destructive capabilities. The have up held the utmost rules of chivalry while battling the Lovecraftian manifestations of Cthon
You can read about him Chthon_(Marvel_Comics)

The Knights of Wundagore have not be heard from within decades??!

The Knights are led by Count Tagar who was rejuvenated after submerging himself in the High Evolutionary's Pool of Knowledge, thereby unleashing his godly potential and giving himself a fiercer, more tiger-like appearance and an almost cosmic level of perception. Tagar is the Evolutionary's right hand & demi-god these days. The New Men have spread across multiply universes fighting the evil of the Old Ones & spreading the message of the Evolutionary himself


According to wiki - The New Men are:
The New Men were the results of Wyndham's first experiments in accelerated evolution. When Wyndham learned that Wundagore Mountain (on which his advanced genetics research citadel was based) was the prison of the powerful demon known as Chthon, he decided to train his creations in chivalry and battle tactics so that they could oppose Chthon should he ever return. He equipped them with advanced weaponry and armor, and gave them flying "atomic steeds" on which to ride (He was assisted in this endeavor by the ghost of the 6th century magician named Magus).
As seen in flashbacks, the New Men became extended family to Luna Maximoff.[1]
Wyndham later converted his citadel into a spaceship, and he and most of his New Men left to explore the stars.[volume & issue needed] They eventually settled on a planet, which they named Wundagore II, with the High Evolutionary staying on the planet's moon in order to look after them.[volume & issue needed] Later still, the High Evolutionary created hisCounter-Earth for his New Men,[volume & issue needed] but that world was taken by the alien Beyonders

The country of Transia  according to Wiki -
Transia is a fictional European country on the Earth of the Marvel Universe. It is located between Transylvania, Romania and Serbia. More than 90% of its people live in one large town (East Transia) and a number of smaller villages located at the base of Mount Wundagore.
Transia was a former section of Wallachia before that country integrated with Moldaviain 1857 to form Romania. Transia broke with the two larger countries and established its status as an independent state, and was recognized 20 years later as an autonomous, neutral nation. Transia is governed by an elected official (burgomeister) who is bound by law to follow the country's constitution to the letter. The nation's main source of income comes from the uranium found in and around Mt. Wundagore --Herbert Edgar Wyndham funded a national non-profit trust with the money gathered from his uranium mine that still provides money for Transia to operate its government programs, and thus they have no need of outside investors or a tourist market. This, along with the (intentionally fostered) negative international image, keeps many foreigners out of Transia.
Transia (and/or Mt. Wundagore) is where Chthon is imprisoned, and was where the men of the Russoff line were afflicted with the curse of lycanthropy. It was also the birthplace of Quicksilver and the Scarlet Witch, and of Jessica Drew. It was the base of operations for the High Evolutionary, and the source of the "radioactive clay" used by the Puppet Master.

The Lovecraftian Connection
There are beings who had come from the stars far before the Celestials & long before man even walked upright whose gifts of life & the unversal genetic structure of the madness it hides is with us all.
They're secrets have been passed from the hands of   Phaeder  to the genetics to Magneto, the High Evolutionary, Arnim Zola, the Jackal, the Enclave(creators of Adam Warlock), and Doctor Hydro (an obscure Namor villain, leader of the Hydro-Men). Including countless others across television & literature.

There are reasons why Magneto himself settled in Antarctica for a time & the secrets of mutation itself a gateway to madness. For eons after the first expeditions  to this blasted hell frozen place of madness & genetic madness has infected the planet with all manner of abominations. From Carcosa to the very heart of the Empire of the Petal Throne the legacy of the Ones continues to haunt mankind to this very day.  Herbert Edgar Wyndham is not a merely a god but a deluded mad man toying with powers beyond his very reckoning! The legacy of the Old Ones flows through his very veins & they are not through with him by a long chalk. They are not extinct at all & are still out there in the universe watching, waiting, & plotting.
The original holder of this knowledge that has caused war & strife upon the world for ages to come & the material that the Elder Things controlled with their powers beyond the ken of men? Ubbo-Sathla ("The Unbegotten Source", "The Demiurge")

There, in the grey beginning of Earth, the formless mass that was Ubbo-Sathla reposed amid the slime and the vapors. Headless, without organs or members, it sloughed from its oozy sides, in a slow, ceaseless wave, the amoebic forms that were the archetypes of earthly life. Horrible it was, if there had been aught to apprehend the horror; and loathsome, if there had been any to feel loathing. About it, prone or tilted in the mire, there lay the mighty tablets of star-quarried stone that were writ with the inconceivable wisdom of the pre-mundane gods.
—Clark Ashton Smith, Ubbo-Sathla

Ubbo-Sathla ("The Unbegotten Source", "The Demiurge") is described as a huge protoplasmic mass resting in a grotto deep beneath the frozen earth. The being is of a monstrous fecundity, spontaneously generating primordial single-celled organisms that pour unceasingly from its shapeless form. It guards a set of stone tablets believed to contain the knowledge of the Elder Gods.
Ubbo-Sathla is said to have spawned the prototypes of all forms of life on Earth; though whatever its pseudopods touch is forever devoid of life. Ubbo-Sathla is destined to someday reabsorb all living things on Earth.
Ubbo-Sathla possibly dwells in gray-litten Y'qaa. The being may also dwell in Mount Voormithadreth and may have spawned another of its residents, the being Abhoth, whose form and nature is very similar. This similarity has led some writers to speculate that Ubbo-Sathla and Abhoth are the same entity viewed at different epochs under different names.[1][2] The tablets that Ubbo-Sathla guards have been oft sought by sorcerers, though no sorcerer has yet succeeded in acquiring them.

The Megadungeons of The High Evolutionary The High Evolutionary makes the perfect megadungeon creator! He's abandoned any number of locations including The Citadel Of Science, Wundagore II and the Counter-Earth. Various laboratories, lairs, space craft, & the entire range of staff including the human cult seen during the Evolutionary Wars story line. The bases, craft, etc. from that time period.

The New Men have been seen upon Carcosa. It is known that the High Evolutionary has ties to both the Knights of Genetic Purity & The Ranks of the Fit.
There is some evidence of his tampering with the Warden several times as well placing or removing species as he sees fit.
The limits of the High Evolutionary's meddling within human affairs is not known at this time but he has had interaction with cosmic entities such as the Celestials & visited the Black Galaxy
. The Analyser itself has much more information & might be the subject of a quest itself. See Analyzer_(comics)

Appendix N For Mutated Empires
Posted by Needles at 12:49 PM