More Kilodungeon Ecology, Design, & More In The Old School & Beyond

"For three thousand years, the secrets of the Nethercity have been hidden. Now the delving of man has breached the ruins, and the lore and treasures of the ancients wait in the darkness below for those bold enough to seize them. But an inhuman evil slumbers in that darkness, and the time of the Awakening is at hand...." 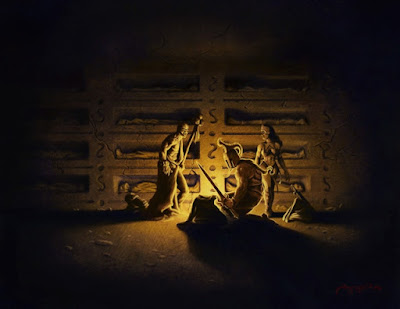 
So over the last couple of weeks I've been watching the Secrets of The Nethercity kicstarter by the Adventurer,Conqueror, King folks.
The dungeon ecology of  Secrets of The Nethercity was well established right from the get go but today's update really put's the criminal  faction spin on this OSR product. The latest stretch goal unlocks the 'King Pins of Crime' & again the layers of the thieves guild material crosses direction;
"The Mink is owned by Liber Faunus, a merchant (10th level Venturer) who became wealthy in the trade of fine elven artwork and trinkets. Elven craft finds much favor among the nobility, who appreciate the aesthetic sensibility of the region’s former inhabitants, and Faunus has buyers as faraway as Aura itself.
In secret, however, Liber Faunus is the leader of the Argollëan Family, the notorious thieves’ guild of the Borderlands. Currently the leading crime syndicate in the region, the Family trades in blackmail information, stolen goods, and looted antiquities. It also receives payments in the form of goods, services, and coin from favored merchants in return for protection – venturers that don’t pay run the risk having their goods donated for the good of the city’s less fortunate, or having an accident while going to meet with the city guard. Similarly, the Family helps its preferred merchants dodge the tax collectors by smuggling taxable goods into and out of the city via the tunnel system - all for a small service fee that is less than the tax that’s due.
What makes the Family unique is its illegal trade in unearthed elven relics. Under Auran law, if treasure - ancient deposits of wealth, of which no memory exists, so that it has no present owner - is found on a person's own land or on unowned land, then the finder is entitled to keep it. However, if the treasure is found on another person's land, then the finder is only entitled to keep half of the find, with the other half going to the owner of the land, who might be the emperor, the public treasury, the city, or some other proprietor or private property owner. Most adventurers who try to find their fortunes in the Borderlands, however, loath the idea of turning over 50% of their hauls and look for cost-saving solutions anytime there is even the hint that the treasures were found on or near public lands or the property of others.
Sharp-eyed tax collectors with great skill at appraising the value of a wide array of trade goods regularly patrol the market and the city auction house. In normal times this is onerous enough for merchants and adventurers, but in these times, with the recent wars on the Empire’s western frontiers and other calamities still fresh in people’s memories, the public purse is stretched thin and the collectors are incentivized to extract lawful revenue wherever they can. Any adventurers wishing to dispose of their newly found luxury goods in favor of coin run the risk of being approached by such officials and quizzed about where they acquired such antiques, 50% of the assessed value hanging in the balance.
However, adventurers that visit the Mink have the opportunity to sell off items looted from forgotten ruins for more - 65% to 80% of their full value. The Family then sells these antiquities to agents of wealthy clients and Auran nobles at a premium.
Although currently the most powerful thieves’ guild in the Borderlands, the Argollëan Family is quickly losing its edge to the new upstart criminal syndicate, Sand & Bones. Whereas the Family treats gambling and prostitution as vehicles to engage their clients for other forms of illegal trade, Sand & Bones has distilled the games of chance and human flesh into raw commodities that can be traded at a great frequency. Sand & Bones' close connections to the gladiatorial community also make it far more bloody-minded than the relatively genteel merchant-thieves of the Family. On top of this competition, the Family is also facing declining revenue in its antiquities smuggling. Over the years, waves of adventurers have picked much of the region's elven ruins clean of any wealth. New finds are increasingly rare, reducing the Family’s revenue and influence.
The Mink is not far from the entrance to the Nethercity, and smuggling hundreds of stones of treasure out of the dungeon past the Family without detection will be nearly impossible. If and when Liber discovers the existence of the Nethercity, he will see it as the salvation of his criminal syndicate. Adventurers who cooperate with the Family can find them valuable, though expensive allies. Adventurers who oppose the Family will certainly face assassins, thieves, and rival adventuring parties (such as the Imperial Vanguard) hired by Liber to plumb the depths."
The whole product's kickstarter reminds me of one of the greatest rpg products to come out.

Citybook I: Butcher, Baker, Candlestick Maker (1982)by Larry DiTillio (Editor), Steven Crompton (Illustrator), Liz Danforth (Illustrator)   was/is one of the first products that really concentrated on the dungeon ecology of a campaign setting. This meta ecology ran through the entire line product of City Book's. 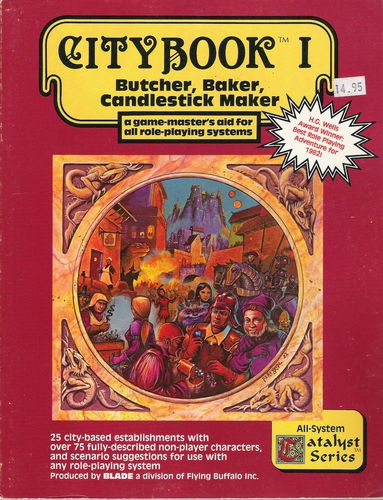 "A game master's aid for all gaming systems.
25 detailed businesses, many colorful NPCs, and over 70 supplemental adventures for city-based scenarios.
After you have created a city map, use these businesses to fill in the spots where you have "a building".
Citybook I received the HG Wells Award for Best Role Playing Supplement at Origins in 1983.
Note on all Citybooks: Each Citybook contains individual buildings/establishments that you can insert into your own fantasy role playing campaign. Again: there are no game-specific statistics. The idea here is to flesh-out that city you have been creating for your campaign. Use these books to fill the nooks and crannies of your own individual city." 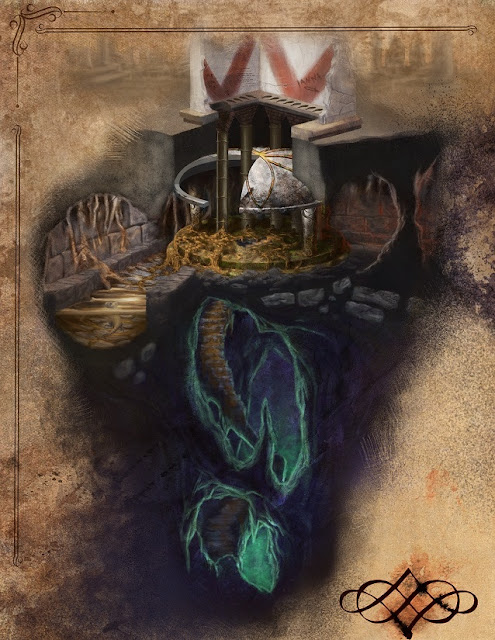 One thing I've always loved about the Catalyst system material  was its  highly system  seamless & they're a low cost collectable old school gaming products. Flying Buffalo were always underrated in my humble opinion. I also think Adventurer, Conqueror, King is also highly underrated with a very undeserved reputation in certain quarters of the OSR. 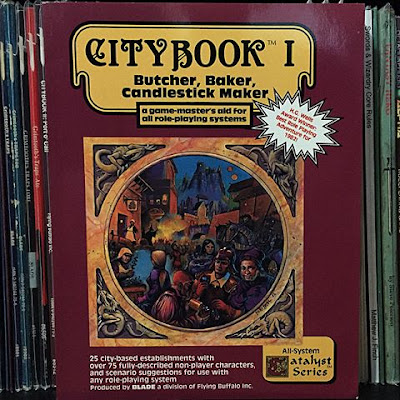 Secrets of The Nethercity supports the idea of the kilo dungeon instead of the massive sprawling 'mega dungeons' of the old school. The Eighties had other kilo dungeons scattered across the old school lines. The difference here is that the entire product is concentrated on the economic impact of the dungeon itself on the urban setting entirely. Basically, Secrets of the Nethercity takes the gaming approach from ACK's Lairs & Encounters & its expands it across the board!
I'm hoping that we'll see more of this style of dungeon ecology & design in the future! Some of the reasons for this: