I've been offline a good part of the day because of work & I've been playing catch up with any number of OSR events going on around my area. Including a friend's T1 Village of Hommlet By Gary Gygax  part I of the Temple of Elemental Evil adventure campaign going on right now.
The party has ventured deep into the heart of the mini dungeon in the moat house, found about the rumors of the advancing forces of the Temple, & gotten themselves deep into the brigands being recruited in Nulb. And the party is in deep way over their heads! 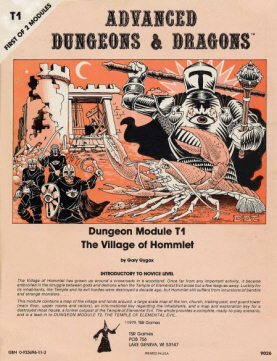 As a dungeon master its easy to forget the deadliness & old school weirdness that makes up Gary Gygax's magnum opus The Temple of Elemental Evil. The sheer  epic old school nastiness that went into the design of this mega adventure is inspiring. In my humble opinion T1-4 Temple of Elemental Evil is perhaps the finest RPG adventure module ever.
Today I was quietly going over The Black Gate magazine article Modular: Everything You Ever Wanted to Know About The Temple of Elemental Evil.
A really fantastic overview & commentary on the history of my favorite module. The thing I love about Temple of Elemental Evil is the flow of the old great old school adventure. How easily this beloved module can actually be adapted to OSR games & retroclone systems.
'It was written by Gary Gygax and Frank Mentzer, and is an expansion of an earlier Gygax module, The Village of Hommlet (TSR, 1979)" You can really get a sense of the grand scope of the adventure as it takes PC's right up the ladder of level advancement if they survive the experience. 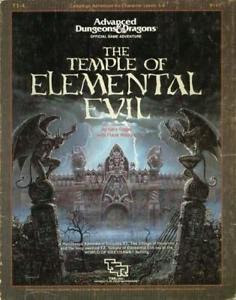 Long time readers of this blog will know that I've run T1-4 The Temple of Elemental Evil numerous times with Astonishing Swordsmen & Sorcerers of Hyperborea 2nd edition & Dark Albion.
T1-4 is not for the faint of heart & takes the 'dangerous lower levels of the dungeon' old hat trick & turns it on its ear & then ups the volume to eleven. The real dangers of the glue of the temple is the humanoid & humanoid forces that infest the areas around the temple's location.  This isn't a light weight dungeon so much so that I've located the place in the forests of Bohemia in Dark Albion's setting.  Given the early history & mythology of the lands it fits nicely. 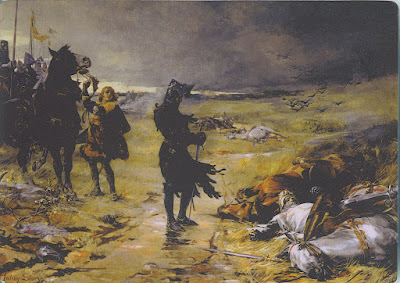 Painting by Julian Russel. Story of the Black Prince at the battle of Crecy. At his feet lies the body of the dead King John of Bohemia.

"T2, the adventurers move on to the nearby village of Nulb to confront several nefarious opponents, including agents from the Temple." This is really the heart of the module where the PC's ascend up the long ladder of PC advancement & then take over the back bone military of the area. The whole area of Nulb & its ilk are really backwaters of evil & the PC's are going to be testing their mettle against the worst of the worst in the form of the demoness Zuggtmoy.

Time & again I've seen players take on T1-4 The Temple of Elemental Evil as a light weight & old fashioned adventure. As soon as the players are creating new PC's the insidious nature of the adventure location becomes evident. Even experienced players fear & loath the forces of darkness of this venerable adventure location.
Why does the place seem to have such a hold on players? Because its one of the mega dungeons with a flesh out history set against the backdrop of Greyhawk. What could be better?
"The temple referenced in the module's title is an unholy structure located in the central Flanaess not far from the city-state of Verbobonc. In 566 CY, forces of evil from Dyvers or the Wild Coast constructed a small chapel outside the nearby village of Nulb. The chapel was quickly built into a stone temple from which bandits and evil humanoids began to operate with increasing frequency. "


Once again their are those pesky & dangerous humanoid forces spawned deep within the unholy depths of the Temple. The whole place is a dungeon cancer on the face of the the central Flanaess. 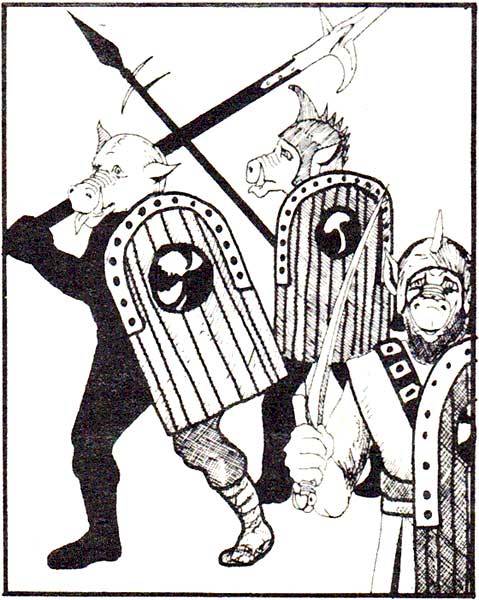 'Orcs on the march' By David Sutherland from the AD&D Monster Manual, TSR, 1977.

The whole point of T1-4 is to break the back of the central Flanaess or the central points of civilization wherever the temple is centered. This is a legendary evil & a hate from old Hell bent on taking out your home campaign world.
Tactics & Tricks for using T1-4 Temple of Elemental Evil