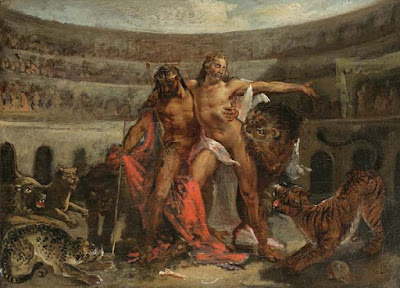 The blood spatters the ground & the crowd goes wild, from across the empire have been brought slaves & not all men. Through the thick roar of the crowd a lone woman leaves the thick of blood combat & makes her way along the thick marble stairs. She looks beyond distraught as she's watched another of her husband's friends die at the bloody end  sword of a sharp sword. But she has a plan & in the shadow of her pagan god's statue she meets her contact. The sharp end of her thieves guild's plot unfolds like the uncoiling of a sea creature's sting into the heart of the empire. Alien moons wheel overhead the only witness to this clandestine meeting. 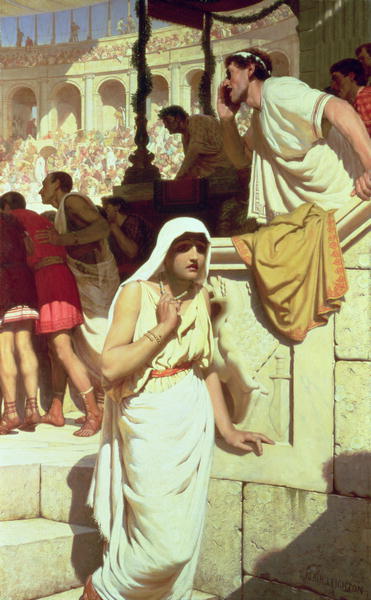 From around the colosseum of a thousand worlds men, beasts, & more deal in the art of the death by combat for the entertainment of the masses. But there are far more to the goings on around these venues of entertainment & death. Thieves guilds, slaver's rings, & a vast network of businesses depend upon the bread & circuses for their very existence.
Anytime that PCs around such a place there is a 30% chance of them getting into the thick of some dangerous or dire plot related to the 'games'. The local thieves guilds often have close ties to the assassins guilds because of the high stakes gambling going on around the colosseum.
PC's may win d100 gold pieces or have a price put on their heads which they make work out within the dire circles & stages of the colosseum itself.

There is a strangeness in my soul
A dark and brooding sea.
Nor all the waves on Capri's shoal
Might stay the thirst of me.
For men have come and men have gone
For pleasure or for hire.
Though they lay broken at the dawn
They did not quench my fire.
My pity is a deathly ruth
I burn men with my eyes.
Oh, would all men were one strong youth
To break between my thighs.
Any many a man his fortune spread
To glut my ecstacy
As I lay panting on his bed
In shameless nudity.
But all of ancient Egypt's gold
Can never equal this,
Nor all the treasures kingdoms hold,
A single hour of bliss.
Within my villa's high domain
Are boys from Britain's rocks
And dark eyed slender lads from Spain
And Greeks with perfumed locks.
And youths of soft and subtle speech
From furtherest Orient,
Wherever arms of legions reach
And Roman chains are sent.
Why may I not be satiate
With kisses of some boy—
They only rouse my passions spate
I never know such joy
As when through chambers filled with noise
Of wails and pleas and sighs
I stride among my naked boys
With whips that bruise their thighs.
I drift through mists red flaming flung
On hills of ecstacies
As shoulder-wealed and buttock-stung
They shriek and kiss my knees.
A Roman Lady
by Robert Ervin Howard 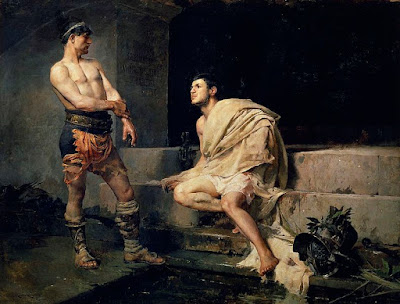 'Agents' are always on the look out for solid raw talent  for the 'games' and can pay 10 to 60 gold pieces on the lower end of the gladiatorial spectrum. Those fighters of 1st to 2nd level can pick up the occasional game but getting 'noticed' might put them in the cross hairs of an agent's slavers or worse. Hiring an agent for 5 coppers an hour will provide the fighter with some protect from these vultures that loom around the games.
There is also the fact that particularly attractive pick up pit fighters could potentially pick up another five to six pieces of gold by finding their way into a jaded noble's bed room. These same places often are the nests from which dire plots & weird schemes for adventurers can often find themselves growing.
1d6 Random Low Level Dire Plots From Around The Colosseum Table