The Green Behemoth Of Destruction For Your Old School Campaigns

It has wandered eternity from eons uncounted until summoned from the Outer Darkness. This green behemoth exists  to wreck havoc on the creations of mankind. This being of horror & evil incarnate represents the last vestiges of a mercenary group of ancient aliens. Now long extinct after millions of years this green cybernetic entity is a long forgotten toy of destruction. Petty, greedy, & evil it only exists for one purpose the destruction of others! 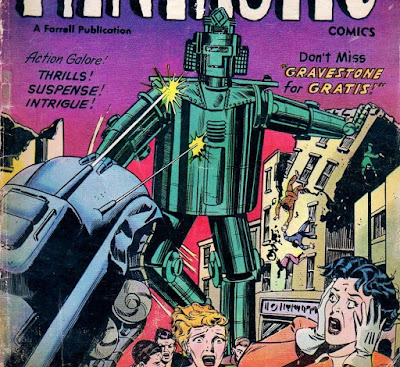 Across time & space this green behemoth has served mad man, petty tyrants, the blackest of mages & wizards, & all the while pursuing its own hidden agenda of evil. This evil behemoth will destroy any work of mankind, coldly murder any man, & wreck  any temple of any god. All if the price is right.


The Green Behemoth has the following abilities as per constructs:

The Green Behemoth is defended by magical saranite armor lasers & energy weapons do half damage.  The horror has the strength of an ice giant. The cybernetic entity was summoned to Earth at the start of World War Two by Nazi Black Sun scientists & cultists. It demanded certain rare Earth elements, rich magnetic soil, & certain esoteric alchemical formulas prepared. It gave them the equations for weapons of ultimate destruction but these were too terrible for even the Black Sun. The monster went on a rampage across several military targets, & saw extensive action in the European theater. The behemoth was next seen in the deserts of New Mexico during the Atomic tests. Reappeared during the so called Atomic Incident & millions of years in the future during the final alignments of the Earth's sun & moon.
There are several constants about the Green Behemoth its unwavering hatred of mankind & near humankind. Its payment in rare treasures, certain rare Earth elements, rich magnetic soil, & certain esoteric alchemical formulas. It has the cold,cruel, intelligence of an evil child gifted with cosmic knowledge. The Green Behemoth can be summoned with forbidden spell of Cyber Monster Summoning from the damned book of Liber Infernal Mechanica
The Green Behemoth has several special abilities unique to it: Within certain occult circles it is believed that the Green Behemoth might have been created by aliens who were indebted to Nyarlathotep. The crawling chaos should never be discussed around the Green Behemoth for the monster will murder anyone who even mentions the name of the forbidden Outer God. The robotic monster fears & loaths the crawling chaos for the three folded name of Nyarlathotep can & will banish the cybernetic monster back to the Outer Darkness