So the tonight the party jumped to hyperspace & to escape the deep space saucer in our Human Space Empire game. The jump through the hyperspace gate proved interesting to say the least.

After a few piloting rolls the group moved along nicely & the pilot disengaged from the Psi drive systems & let the A.I. coast along for awhile. Things were moving along as the reverse of stars moved by the ship with little problems. Several alarms went off aboard the ship indicating that a large metallic object was come through on a hyper space wake from another point in space & time. The metallic wreck came fast & engineering had to do some fancy foot work to say the least. The pilot slammed himself back into sink with the A.I as fast as possible & used his psi abilities to take a look at the mess ahead. There were no life signs aboard & the crew approached the wreck for salvage. I rolled on the Star Ship Salvage Materials Tables Things began to heat up as the Astronaut began surveying the wreckage.
The scientist began to run through the calculations for bring the ship within a simultaneous course with the wreck. Magnetic links & rocket grapples were fired & rolls were made. Success
The two ships linked & the party made preperations to go aboard the ghost ship. There were no life form readings or power fluctuations abroad. This was a dead ship...
They brought the portable air lock & began the task of going aboard. There were hundreds of corpses. The ship's bridge was blasted out of existence. There were disruptor scoring all over the hull. They started to do a quick scout around & investigated one of the crew quarters. Everything was going smoothly.
Some one joked about the corpses as zombies. That's when said corpse twitched & began to claw the pc. The z rays began to sing in the vacuum. The corpse was blasted out of existence.

That's when the first of the energy balls exploded from the corpse. Then there was the twittering laughter of the semi corporeal   1 1/2 foot tall little creature with the odd faces. An other quick scan this time for planar creatures turned up 10 of the things aboard & some weird planar energy readings coming from engineering.
With some careful playing the pcs were able to capture 3 of the strangely lighted balls of negative planar energy. This only provoked the others.
Meanwhile the two ships continue to race along the hyper-spacial corridor toward that unknown destination. The pcs are using the old unknown planar routes along the robot ship's old routes! Just then the planar creatures began to mass again as undead.
That's just when their energy weapons broke down! I really made the pcs go looking for replacement parts & dumpster dive through the star ship's trash for some of the replacement parts.
Just then the "undead" manifested the ability to form electrical arches from their fingers. We ended here for now! 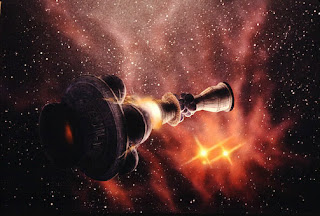