"It is with heavy heart that I confirm the rumors which you must have heard by now.  My husband, Lord Gavanov Keiner, 23rd Baron Keiner, known to many as the Blue Baron, is no more.
Yet hope remains in the words of his final command, a rather unique funeral arrangement.  The Blue Baron dares all brave and adventurous souls who would risk death in trade for fame and glory to come forthwith to Einhornstadt, arriving no later than three days before moonrise.
My Lord Baron calls on you from beyond the grave. Ignore him at your loss and peril.
Expectantly,
Maria Keiner" 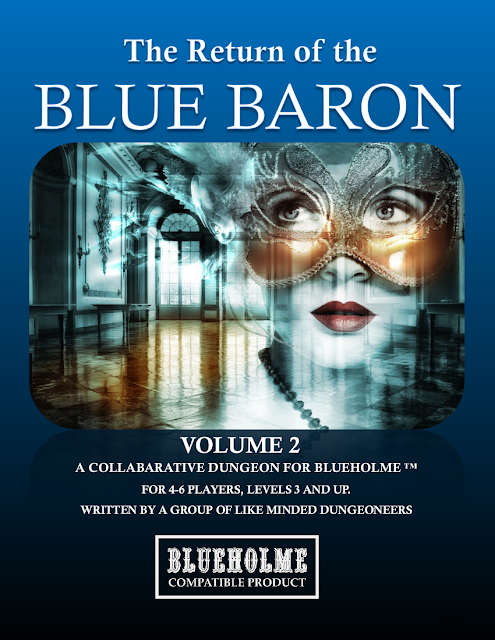 So begins the savage introduction into The Return Of The Blue Baron (A Collaborative Dungeon For Blueholme) From  3 Toadstools.
This is basically a free mid level adventure which is actually an advertisement for the Blueholmes retroclone system but don't let that fool you. The Return of the Blue Baron has some really interesting twists & turns to it. Clocking in at seventy five pages this dungeon adventure serves as a weird mid level testing ground for adventurers. Here's what this actually means in overall play at the table top.

The tricks & traps are original on the whole the adventure  breaks down as follows:
2 Levels  - A short & sweet way of doing a dungeon with several nights of actual play & that's not a bad thing because it gives the dungeon master & players a good run of sessions without bogging adventure events & combat.
46 Rooms - The descriptions of the rooms break down into a well rounded experience for the players with the challenges being well thought out. Balance is well OSR balance so its an interesting mix.
New Creatures - There are some 'Weird Tales' style creatures that can be ported over to a number of other adventures to keep the campaign flow going. There are some solidly done creatures.
New Artifacts & Magic Items - The artifacts are solidly done but some of the magic items will have to be weighted by the DM on a case by case basis for their over all campaigns. Make sure these items fit your home game style.
The cartography is decent & serves the adventure's style very well. The over all flow of the maps serves to heighten the feel of the adventure.

The Return Of The Blue Baron could be used as a mid point adventure for any number of old school Dungeons & Dragons editions including Advanced Dungeons & Dragons first edition. This adventure is ideally suited for Labryth Lord or Lamentations of the Flame Princess with the Blue Baron's holdings being put on the outer edges of the British Empire in Europe.
For a Sword & Sorcery game such as Astonishing Swordsmen & Sorcerers of Hyperobrea the Blue Baron's holdings should be placed near the Hyperborean capital within about 100 miles or so.