P'kelachothab's Museum Of Forbidden Sciences is a museum dedicated to Forbidden Sciences and has the largest collection of weirdcraft and strange planar related artifacts in all the worlds.The place is by invitation only &  P'kelachothab the planar being who runs the place must extend such an invitation. The museum stands outside of time & the Outer Darkness lit by the blazing corpse of some ancient planar power destroyed in some nameless Ragnarock. The entire universe fits inside a small pocket dimension guarded by the Watchers of  P'kelachothab. Very little is known of these hooded savage beings.
The museum is reachable through certain forbidden gateways ~A small passage handed down from from ancient antiquity :
"Gateways," Beane proclaimed, "gateways between worlds!" he paused suddenly, his face showing the anxious defiance of those who fear they will be thought mad.  Over the rattle of hailstones on the shutters, I could hear the hiss of his loud, rapid breathing.  As suddenly, he recovered his courage, and continued: "Yes, others have made such things, and certain vile secret societies have long striven to let their unspeakable masters enter from beyond.  But LeMarchand was clever!  As you know, a gate must be 'anchored' to a specific, unique pattern.  Often, fixed configurations of matter are used: stone circles, or caves, or diagrams.  The key is usually a series of thaumaturgically equivalent temporal structures: gestures and sounds.  But I digress..."

Some of the Unique Displays of  The Museum Include: 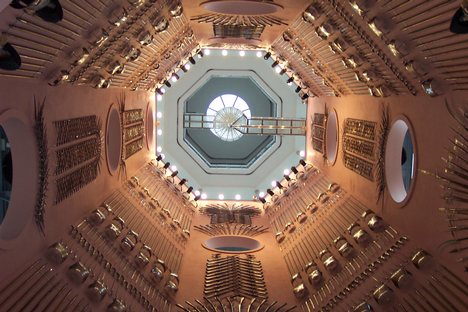 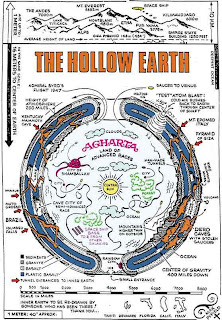 The Ancient Globe -an "interesting but primitive work by a talented provincial," This Earth seems to prove Hodgkin's Law of Parallel Planetary Development was a biological theory first postulated by A.E. Hodgkin. The theory was that similar planets with similar environments and similar populations tended to gravitate toward similar biological developments over time. Although initially applicable only to biology it was later expanded to include a tendency to move toward similar sociological developments as well with sentient beings. This of course is until the Earth is observed for any length of time. The actual world has been trapped in its current state by the Titans because of an infection of Deros. The current time line is some where around Earth is the 1960s. There have been several attempts by the Burke & Hare to grab The Ancient Globe. All have been foiled & those responsible have been made to suffer as part of the museum in the Hall of the Screaming Ones.
P'kelachothab's Museum Of Forbidden Sciences has been known from time to time to employ adventurer's to recover more artifacts for display or to recover some of the more troubling artifacts that have gone wandering. Please accept an invitation from our staff.