They come from across the space ways & they are on a holy crusade to change the lives of others. Their one goal is to take you as a slave & sold in the under slave markets of  Hnalla II. They are on a holy mission from their goddess to bring change to each person's life. When you are captured by a band of these you hooked up to a strange life essence draining drive system. Six persons to each "oar" of this strange system. Slow drop by drop you become part of their ships. There computer systems leech all your knowledge as well . Each ship's computer is a bank of the captured & damned soul's knowledge that is used against the next target.
The anti pasha, ruler of the corsairs, received one-seventh of the seized treasure and slaves.  The corsair captains and their associates received the remaining slaves and cargo, while the soldiers, who boarded and captured the prey, divided the silver.
They destroy that which they can not take & sell. They're favored weapon is the Plasma Maghreb nimcha.
A nasty weapon of short length with a wide blade for opening up their victims. This weapon was fast & deadly. 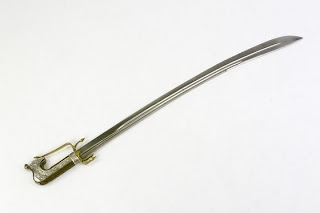 The corsairs of Vimuhla make use of a wide variety of captured space craft & raid deeper & deeper into Empire area. The fleet has been ordered many times to blow them from the sky when seen. Yet they continue to plague those areas where can operate with impunity.