Bursting from the jungle undergrowth comes the Mega bugs! Mecha coming straight out of the 70's into an alien gladiatorial arena upon Carcosa today! 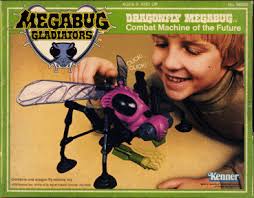 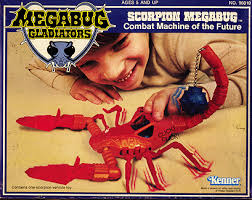 These incredible mecha were recently uncovered upon Carcosa and have taken up their ancient deadly trade of gladiatorial combat once again. They work as mercenaries often on opposites for the pay of 1d4 artifacts and the chance to test their metal against each other once again. 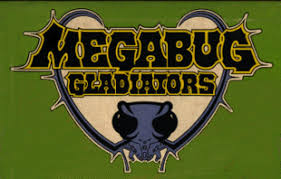 The alien insectoids that drive these mecha have been seen across the galaxy for the past couple of months in their strange bio organic armor making inquiries and dealing themselves with galactic affairs. These mecha and their drivers were rumored to have been seen on Earth during the Atomic Wars. The Mega Bugs are copy right and trade marked to the Kenner corporation. This is a fan homage from my childhood and this is for Entertainment purposes only.
All information is from my sick and twisted DM's mind but the photos and such are from the Plaid Stallions site and you can view more right
HERE MEGA Bug Gladiator Catalog From Plaid Stallions!
Posted by Needles at 9:38 AM