Manufactured though out known space is the Mark III Blaster pistol. This unit is the last word in simple energy weapon technology. A magnetic bottle model holding a series of neutron particles in suspension. This weapon has seen action in more fields of combat then any other weapon.

These weapons have seen extensive use in the field and were standard issue to United Planets forces. Since the 23rd century they have been in every star ships stores. These are a tried, true, and tested weapon. There has not been a weapon as iconic to the spacer as this weapon. Comparisons to Samuel Colt's hand guns are not without merit. These weapons have served with distinction in the farthest flung reaches of the universe.

The Mark III Blaster saw action along with theMark III  blaster rifle during the "Queen Of Space" Affair and the revolt of the Venusian Terraformed colony. 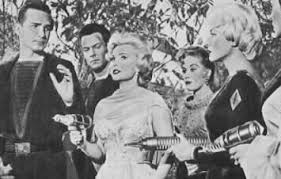 The weapon sees extensive use in the field even today and can be maintained with a tech level 4 or better workbench. The weapon is light weight, quick on the  draw and effective. 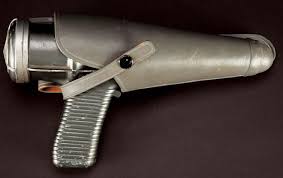 For Star Ships and Space Men 2nd Edition this weapon does 2d6 hp damage with a range of 400'. These weapons are still being manufactured and a very easy to maintain in the field.

The Blaster is usually carried in a pseudo leather harness rig for safety and maintains a charge for over 89 hours of continues use.

No copy right infringement is meant by this post nor trademark violation. This post is a homage to Forbidden Planet and the wonderful prop makers.
Posted by Needles at 10:07 AM